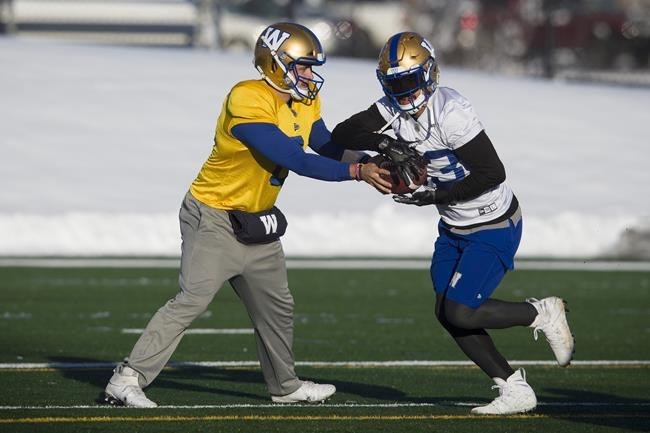 CALGARY — The local talent on the Winnipeg Blue Bombers roster made decisions to come home during their football careers.

CFL rushing leader Andrew Harris, receiver Nic Demski, linebacker Thomas Miles and offensive lineman Geoff Gray will play in a Grey Cup for their hometown team for the first time in their careers Sunday in Calgary.

Harris, Demski and Miles signed with the Blue Bombers as free agents from other CFL teams, while Gray returned from the NFL to the CFL club that drafted him.

"I recruited Andrew like crazy out of high school and tried to pry him away at times from the Vancouver Island Raiders," Dobie said. "He's an honorary Bison in my heart."

The players' reasons for returning ranged from family, to how they fit on the football team, a desire to don the colours of their city's CFL team, or a combination of all three.

"My biggest deciding factor was my daughter was in Winnipeg and I wanted to come back and be close to her and I wanted to live out a childhood dream to come play in our hometown," Harris said Friday.

"The business side of things just happened to match up as well."

After seven seasons with the B.C. Lions, the return of Harris to Winnipeg in 2016 was big news for Bomber Nation. He'd won a Grey Cup with the Lions in 2011 and was named outstanding Canadian in that game.

Harris has rushed for 4,700 yards and 22 touchdowns in four seasons with the Bombers. He was named the CFL's Most Outstanding Player in 2017.

The 32-year-old topped the league in rushing yards this season with 1,380.

After he was drafted by Saskatchewan, Demski played two seasons for the Roughriders before signing a one-year deal with the Bombers.

He was attracted by Winnipeg's plan to shift him to slotback from wideout.

"Winnipeg being home was kind of the cherry on top."

But sentiment crept into his decision to sign an extension for 2019.

"Knowing what we had done in 2018 and how close we got to the Grey Cup, it was something I really wanted to build on and be part of something special going on in Winnipeg," he said.

"You could say there was more emotion."

The 25-year-old ranked third in Bomber receiving with 543 yards and three touchdowns this season, and has rushed for 147 yards and two touchdowns.

Miles, a 27-year-old special teams player, returned to Winnipeg in 2017 after three season with the Toronto Argonauts.

"I always wanted to play for Winnipeg. I got my first opportunity playing in Toronto and I really enjoyed my time there, but I did always plan to come home eventually," he said.

"There have been season tickets in the family for over 40 years. The blue and gold run in the family. I figured if I was playing in the CFL, I should do my best to get home."

Drafted in the first round of the 2017 draft, Gray spent a season and a half trying out for various NFL teams before the 25-year-old headed home.

"It definitely was a big deal to be drafted by your home team and having family here," Gray said. "It definitely factored into my decision to come back to the CFL when I did.

"The NFL was a cool experience for a bit, but the Bombers felt like a place I wanted to be long term."

Demski, Miles and Gray grew up without seeing the Bombers hoist the Grey Cup. They were born after Winnipeg won it in 1990. Harris was three years old.

They're not responsible for a 29-year drought, but to end it Sunday would feel particularly sweet for the Winnipeggers.

"I feel obligated that we're in this situation now to end it," Harris said.

"It's one of those things if it doesn't go the right way, I'm responsible for it in a certain way right? It's an opportunity to end it and it's my responsibility to fulfil the needs of our fans and our city and for my teammates."

Said Miles: "Like I said, there have been season tickets in the family for decades so that's a lot of years of no Grey Cup. I know how my family members would feel to have the Cup back and I'm sure that extends to every other Bomber fan out there. We absolutely want to, and need to, bring the Cup home."