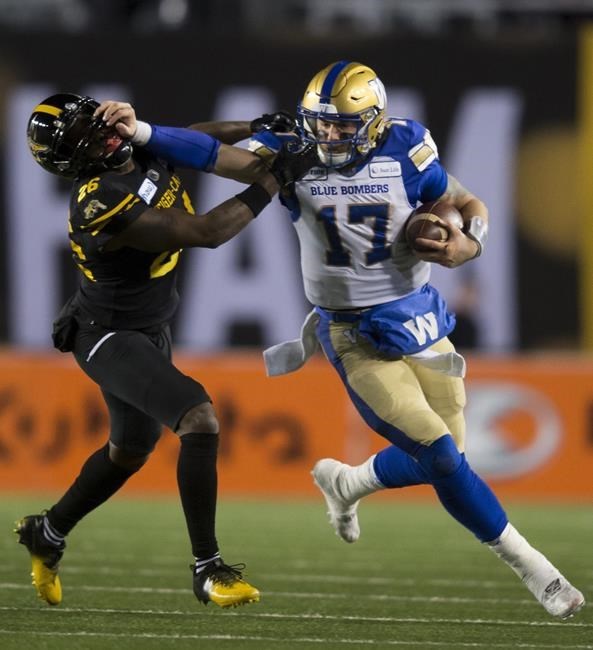 TORONTO — The 2020 CFL season will feature a Grey Cup rematch in its opening week.

The league released its 2020 schedule Monday, and the Winnipeg Blue Bombers start their Grey Cup title defence with a June 13 date at Hamilton. Winnipeg defeated the Tiger-Cats 33-12 in the 2019 CFL championship game.

The 2020 campaign will start June 11 — a couple of days earlier than other recent seasons — when the Edmonton Eskimos host the B.C. Lions. Edmonton's Scott Milanovich and B.C.'s Greg Campbell will make their regular-season head-coaching debuts with their new teams.

Ottawa hosts Toronto and Calgary welcomes Montreal to round out opening week.

The Saskatchewan Roughriders have a bye in Week 1 and make their 2020 debut when they host Montreal on June 19.

Other schedule highlights include the Labour Day Weekend slate, which features B.C. at Ottawa on Sept. 3, Winnipeg at Saskatchewan on Sept. 6 and the Toronto at Hamilton and Edmonton at Calgary on Sept 7. The following Saturday features two traditional rematches with the Riders visiting Winnipeg and the Stampeders in Edmonton.

Toronto will visit Montreal for a Thanksgiving game on Oct. 12.

The Argos will lose another home date when they play at an unannounced neutral site July 25 against Saskatchewan. Toronto was the designated home team for a game in Moncton, N.B., against the Alouettes last season.

Games are scheduled on Saturday through all 21 weeks of the season, and on Friday for all except Labour Day week. Thursday games are scheduled for the first 13 weeks, and there are no Sunday dates until the playoffs.

The season will culminate 108th Grey Cup on Nov. 22 in Regina.

This report by The Canadian Press was first published Dec. 16, 2019.