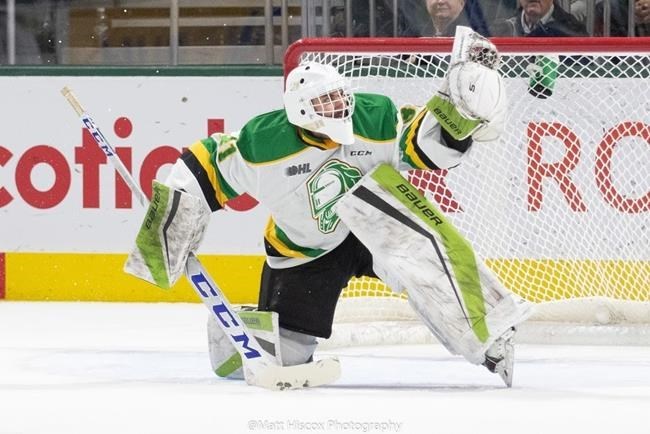 Goaltender Dylan Myskiw always believed he would catch on with another team after being released from the Western Hockey League's Edmonton Oil Kings.

He just didn't think he would have to change leagues to make it happen.

After more than a month of facing the unknown, and no interest from any of the other 21 WHL clubs, the 20-year-old Myskiw has gone from jobless to being the No. 1 with the Ontario Hockey League's London Knights.

"It's a different experience, different league, trying to get everything figured out," Myskiw said.

"Every game I want to win so I'm here to play my heart out for the team, that's anywhere I go."

Myskiw, six-foot-one and 180 pounds, made 27 saves for a 4-2 win against the Red Deer Rebels in Edmonton's season opener in late September, but that would end up being his final start for the Oil Kings as he fell victim to the Canadian Hockey League's over-age rule.

Every CHL club is allowed three 20-year-olds on its roster. Despite playing 45 games and leading Edmonton to the Eastern Conference final last season, the Oil Kings went in a different direction and chose to use their three openings on skaters, with 19-year-old Todd Scott and 17-year-old Sebastian Cossa taking the spots in net.

"They thought they needed one of those (over-age) players to put up points and thought they were all right on their goalies," Myskiw said.

Without a team, Myskiw scored ice time with the Portage Terriers of the Manitoba junior-A league, practising with the club to keep in shape while staying optimistic a major junior team would come calling.

When WHL's teams declined to add him, Myskiw was acquired on waivers by the OHL's Sarnia Sting on Oct. 18. But he never played a game for the Sting, with Sarnia shipping him to London for 19-year-old netminder Jordan Kooy and a conditional third-round draft pick in 2024 only 10 days later.

"It's been a few hard weeks not knowing where I was going or what I was doing but I had to have faith that something was going to come through," Myskiw said.

"I was a little surprised at first, kind of confused with everything happening. But switching over leagues has been good so far."

Knights general manager Mark Hunter highlighted Myskiw's veteran poise as the main reason for acquiring him from the Sting. And Myskiw has responded accordingly.

"The Knights were one of the teams I knew in this league and it's a big-name team, lots of history….. I was definitely excited to hear London had interest," Myskiw said. "I'm really happy with how things are going."

Myskiw, who has also played for the WHL's Victoria Royals and Brandon Wheat Kings, went undrafted by NHL clubs, but was invited to development camp this past summer with his hometown Winnipeg Jets. His goal is to still go pro and hopes one final run with the Knights can help bode his chances.

Players switching leagues in the CHL isn't a routine occurrence, but it does happen more often than not with goalies.

Over-ager Bailey Brkin was released by the WHL's Spokane Chiefs in the summer and began the season with the Medicine Hat Tigers before the OHL's Kingston Frontenacs claimed him on waivers and sent him to the Sault Ste. Marie Greyhounds on Nov. 12.

London also had Brendan Burke, son of former NHLer Sean Burke, join the Knights as an over-ager in 2017-18 after four seasons in the WHL.

This report was first published by the Canadian Press on Nov. 21, 2019.