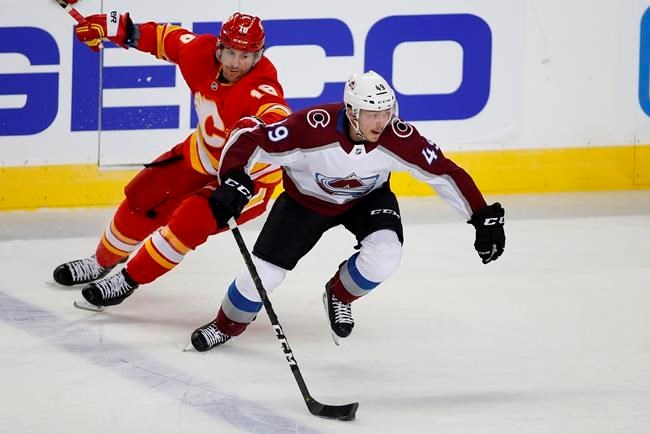 Calgary head coach Bill Peters confirmed the move after Friday's pre-game skate. The Flames trailed the Avalanche three games to one in their best-of-seven opening-round series.

Czarnik, 26, will make his NHL playoff debut. He had six goals and 12 assists in 54 regular-season games for Calgary.

"When Zee has come into the lineup, he's given us an element of skill in the offensive zone," Peters said. "We want to hang onto pucks and spend some time down there.

"Any time you bring a guy in, somebody's got to come out right? They're tough decisions. We spent a lot of time on it the last two days. We think it's the right move to make at this time."

Calgary signed Neal to a five-year contract worth US$28.75 million last summer in large part because of his playoff experience and production the previous two seasons with Nashville and then Las Vegas.

Neal had a combined 12 goals and eight assists in 42 playoff games with those teams.

The 31-year-old mustered seven shots on net, had zero points and was minus-3 in Calgary's first four games of the series.

"You never want to see any of your teammates go through anything like that and not be able to get in," Flames captain Mark Giordano said.

After a 4-0 win to open the series, the Flames scored two goals in each of their next three losses.

Czarnik drew in on Calgary's third line with Michael Frolik and Mark Jankowski in the morning skate.

Peters shifted Sam Bennett up to the top line alongside centre Sean Monahan and left-winger Johnny Gaudreau in an effort to get more production out of them.

Gaudreau had yet to score in the series. Winger Elias Lindholm moved to a line with Matthew Tkachuk and Mikael Backlund.