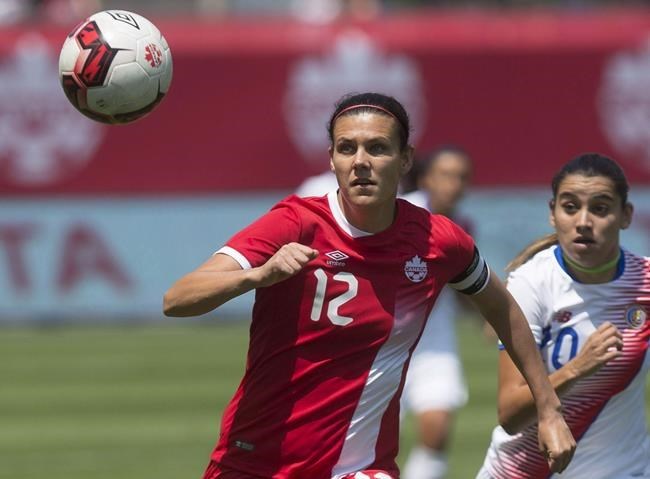 TORONTO — On the eve of the Women's World Cup, Canada captain Christine Sinclair is sounding the call for women's pro soccer in Canada.

Sinclair has made a career of growing the sport of women's soccer and she's not finished yet.

"When I first joined the national team, no one cared, no one paid attention. You couldn't make a career playing the sport unless you were on the U.S. team," Sinclair said in an interview Thursday. "So I'm proud to be a part of the change.

"Whereas on the men's side they have MLS and now the new professional league (the Canadian Premier League). For young girls there's nothing."

It's a passion for the 35-year-old from Burnaby, B.C., who played for the Vancouver Breakers and Whitecaps before moving south of the border in 2009 to star for FC Gold Pride, Western New York Flash and, since 2013, the Portland Thorns of the National Women's Soccer League.

"We continue to be one of the powers in women's soccer yet we're probably the only top-12 team that doesn't have a professional system. That disappoints me," said Sinclair.

While the star forward said she does not have all the answers on bringing women's pro soccer to Canada, "it needs to happen — sooner than later."

Now in its fourth season, the NWSL has nine teams — all in the U.S.

"To me it just doesn't make sense that we couldn't have one or two teams in the NWSL from Canada ... We have players forced to leave Canada to go find a place to play which doesn't sit well with me," Sinclair told a news conference after training Thursday.

The Canadian women, currently ranked fifth in the world, host No. 26 Mexico on Saturday at BMO Field in their farewell match before leaving for the World Cup in France.

Canada opens June 10 against No. 46 Cameroon in Montpellier.