Canadian men's team sticks with familiar look for rematch against US 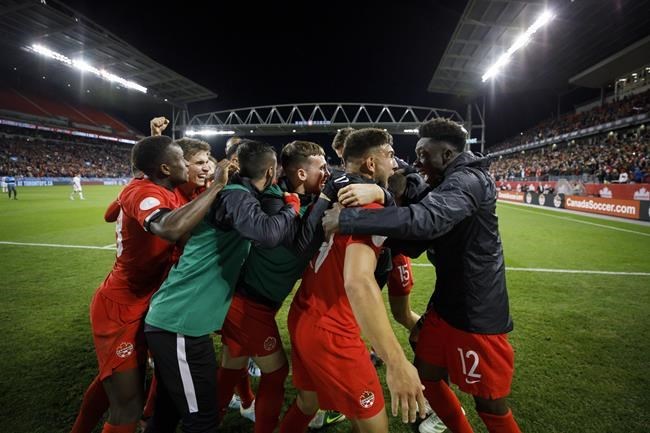 The Canadian men's soccer team will soon find out whether consistent players on the roster will translate to consistent results on the field against top competition.

Canada announced its roster Friday for its CONCACAF Nations League rematch against the United States on Nov. 15 in Orlando. It features 21 of the 23 players that were on the squad for Canada's first victory against the Americans since 1985 — a 2-0 win in Toronto on Oct. 15.

"It's a quick turnaround in the Nations' League, and the roster has been quite consistent from the Cuba matches through these last three games," Canada head coach John Herdman said Friday in a phone interview. "When you're working internationally it really is important to get that consistency with players coming into camp, so they can slot back in to certain tactical theme.

"But more importantly we're investing in people, and we want to keep investing in a consistent group of players."

Defender Dominick Zator of Calgary's Cavalry FC of the Canadian Premier League and midfielder David Wotherspoon of St. Johnstone FC of the Scottish Premiership are the newcomers.

It's the first call-up for Zator, who helped Cavalry finish first in both halves of the inaugural CPL season and impressed Herdman with his play against tougher opponents in the Canadian Championship.

"He showed solid performances in his run against MLS teams in the Canadian Championship," Herdman said. "And he's got a level of flexibility. He can play at centre back, he can play at fullback, and he has a real physicality about his game, which I think is important for this game coming into the U.S."

Wotherspoon earned two caps for Canada in 2018 after representing Scotland at the U18, U19 and U21 levels.

"He's a very steady midfield player with great energy," Herdman said. "He's tactically disciplined, but has that creative streak in him that I think's important for the type of player we want."

Canada also is trying to secure valuable ranking points to stay in the top six in CONCACAF. The top six teams in the region as of next June earn berths in the so-called Hex, the most direct route for World Cup qualifying.

"The Americans will have their own motivations," Herdman said. "We have to come with that same spirit, that same mindset that this is about qualifying for the Hex and we'll do whatever it takes to make that happen."

The Canadians jumped into sixth in CONCACAF and 69th in the world after their win over the U.S. (second in CONCACAF, 23rd in the world), but their place in the rankings is far from secure.

Panama, ninth in CONCACAF, hosts top-ranked Mexico in Nations League play next Friday, and a win would mean a significant jump in the rankings.

El Salvador sits seventh in CONCACAF, and while it doesn't have a lot of points to be gained from upcoming matches against Montserrat and the Dominican Republic, it currently trails Canada by just three ranking points.

Curacao is eighth and hosts Costa Rica next Thursday.

Herdman said players know that continuing to earn good results in Nations League, starting with the U.S. rematch, is vital to ensure Canada takes the next step toward World Cup qualification.

"They know what we're trying to get to, the World Cup in 2022. The Hex is the pathway to that and ultimately winning Nations League puts us on the right path," Herdman said.

"They're clear that every time they come in it's about being better every camp, and that's been our philosophy since we started this campaign, and that improvement has to put them in a position where we can get results against teams we haven't traditionally got results against like the USA

"So for us it's that clear. Come in, better every camp, and our better will put us in the best position to finish top of Nations League Group A and on to the Hex."

Herdman said the senior men's team has been able to build consistency both tactically and culturally over the past few camps, and now it's starting to see the fruits of those labours.

"The tactical framework we've embedded has since got better as we've come up against better opposition, we've learned and we've adapted. But what we're starting to see is that consistency. We're able to show an identity against a team like Cuba, a team like Martinique, and that's been consistent now against that tier-two type level of opposition in CONCACAF.

"To see us be able to impose our identity on the U.S., in our last game was a big step for the team. That was an improvement form a tactical perspective where we're starting to believe we can play a certain way against a better opposition. And that's critical on our path to the World Cup."

Canada is 10-2-0 in its past 12 games and has set a national-team record by scoring at least one goal in all of those contests.

Herdman said if those results keep coming in, it will get easier to get clubs to release players for international duty, something he said has been difficult at times in the past.

"The more results we gain as a team, the more people understand how important this journey is to the World Cup, and that every game counts," Herdman said."

"We're building something. And having our best players in every camp helps us keep building the momentum. It helps our young fans see our best players turn up to Vancouver, or Toronto, or wherever we're playing regardless of who the opponent is, I think that's crucial to keep growing the game in this country.:

Raptors' Ujiri says conversations about racism can no longer be avoided
May 31, 2020 8:54 PM

MLS players agree to concessions to return to action at Orlando tournament
May 31, 2020 8:39 PM