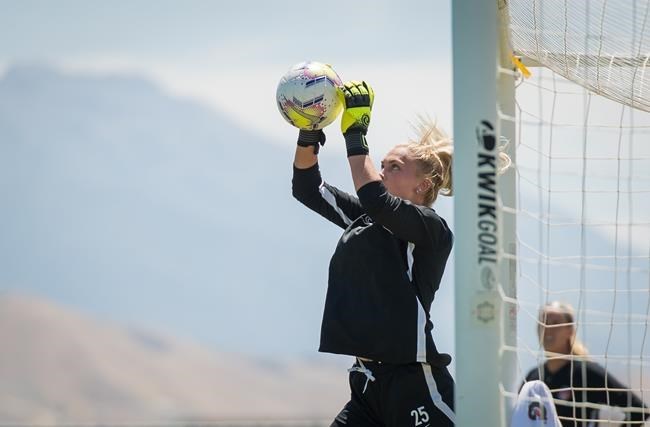 Growing up, Devon Kerr drew attention from both sides of the border for her goalkeeping skills.

A dual citizen, the Canadian-born Kerr chose Canada and played in the 2014 FIFA U-17 Women's World Cup in Costa Rica. But opportunities dried up after that and when U.S. Soccer reached out again, she said yes — wanting to keep challenging herself on the highest level.

"I was young. I was definitely a lot more immature back then and not as fine-tuned as I am now," Kerr said. "But I just knew from that age that I wanted to play at the very best level that I could play."

Now 23, Kerr has matured on and off the field. She has closed no doors on the international front. But she is focused on building her pro career with the National Women's Soccer League's Washington Spirit.

While both Canadian and U.S. officials have kept in contact, Kerr knows she will have to earn another invite. But it's one step a time.

"I have love for both countries completely. Both of them have given me so many opportunities," she said. "But right now my main focus definitely is I want to solidify my professional career. I want to keep training, gaining as much experience as I can with my coaches and the players around (me) every day.

"I just want to keep focusing on that and becoming the best possible goalkeeper I can be."

In the past, Kerr acknowledges she may not have been able to see the forest for the trees — worrying about national team opinions rather just concentrating on her on-field play.

"I think it clouded my performances a little bit," she said. "I think it put a little bit too much pressure on me. You didn't get the best out of me because of it."

Born in the Toronto area, Kerr grew up in Barrie and Markham, Ont. While her Barrie-based parents are both Canadian, she and her mother also hold American citizenship through her mother's father, a U.S. veteran.

Kerr excelled at Ohio State University, where she was Big Ten goalkeeper of the year in 2018. Buckeye teammates included Canadian internationals Lindsay Agnew and Nichelle Prince.

"My four years there were some of the most memorable four years of my life for soccer ... I absolutely loved my experience there," she said.

Kerr went undrafted but drew NWSL interest from North Carolina, Houston and Utah, signing with Houston. She spent the 2019 season as the Dash's third goalkeeper.

A brief stint with France's FC Metz followed. It proved to be less than satisfactory with Kerr having to deal with visa issues and a club low on resources and facing relegation.

After cutting her losses in France, Kerr returned to the NWSL with Washington in March on a two-year deal, with a club option for a third. With the Spirit, Kerr is backing up Aubrey Bledsoe, the 2019 NWSL goalkeeper of the year, with rookie Katie Lund the third 'keeper.

This season has been stop and start due to the pandemic.

Kerr and the Spirit got one day in at training camp before it was shut down. After a few weeks in Florida, the players spent most of the lockdown in Maryland, where the team is based.

The NWSL returned to action in June for the Challenge Cup in Utah, with Houston defeating the Chicago Red Stars 2-0 in the July 26 final. Washington, with Bledsoe in goal, lost a penalty shootout to Canadian 'keeper Kailen Sheridan and Sky Blue FC in the quarterfinals.

Kerr has found a soccer home with the Spirit.

"I feel very welcomed by the team, supported," she said. "And I love our coaching staff a lot. I'm very happy where I am right now ... I really think I'm in a good head-space right now and understanding what my value is and how I can continue to make myself a better player.

"And then eventually reach those goals, when it comes time for it. Then I'll be ready for that."

This report by The Canadian Press was first published Aug. 13, 2020.

Powell, Lowry do their bit but undermanned Raptors beaten handily by the Pistons
Mar 3, 2021 8:50 PM