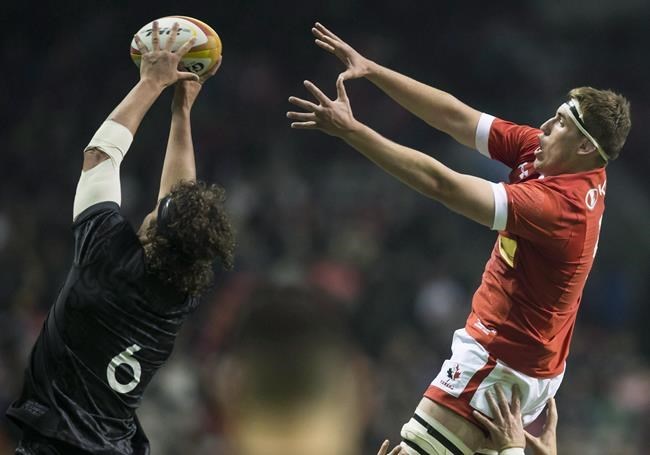 TOKYO — Canadian forward Josh Larsen has been handed a three-match ban in the wake of his red card against South Africa at the Rugby World Cup.

The 25-year-old from Parksville, B.C., who came on in the 12th minute as an injury replacement, was sent off in the 36th minute of the Springboks' 66-7 win Tuesday for a shoulder charge to the neck of prop Thomas du Toit at a ruck.

The straight red was for an act of foul play contrary to Law 9.20 (dangerous play in a ruck or maul).

World Rugby said Larsen admitted the act of foul play, that he had contacted his opponent’s head and neck and accepted that it warranted a red card.

The initial decision was a six-match ban but the sanction was halved for several mitigating factors including Larsen's clean record.

Larsen visited the South African dressing room after the game to apologize.

Larsen will miss Canada's final pool match against Namibia on Sunday as well as the first two matches for his MLR club New England Free Jacks.

Larsen is the fourth Canadian to be sent off in the history of the Rugby World Cup. Captain Gareth Rees and Rod Snow were ejected after a fight-filled loss to South Africa in 1995. Flanker Dan Baugh was red-carded at the 1999 tournament for stamping in a game against Namibia.

This report by The Canadian Press was first published Oct. 10, 2019.