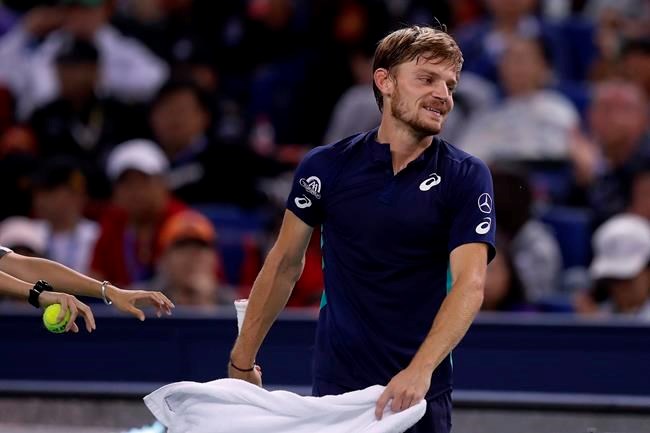 "I start to feel different even if I try to stay the same," said Medvedev, who added that other players "start to talk to you differently."

The 248th-ranked Pospisil, from Vancouver, lost his bid to become the third qualifier ever to make the Shanghai quarterfinals. Pospisil returned to the tour midway through the year after undergoing back surgery.

He's projected to improve to No. 190 in next week's rankings.

Pospisil failed to capitalize on five set points in the first set, including two chances in the tiebreaker.

Medvedev's frustration got the better of him when Pospisil led 4-2, 40-30 in the first set, which led to him smashing his racket repeatedly into the ground at the baseline.

"I usually don't like to do it, to break the rackets, because it's never beautiful," Medvedev said. "But it's true that sometimes it maybe can help to get some emotions out and get also the stress out."

Third-seeded Medvedev, who reached his first Grand Slam final at the U.S. Open in September, leads the tour this year with 56 victories. He next plays 10th-seeded Fabio Fognini of Italy in the quarterfinals.

"I think (he's) the worst player I can play at the moment," Fognini said of Medvedev. "He's really dangerous."

"I'm happy because I was losing to him last week and I was playing really good also," 10th-seeded Fognini said.

Meanwhile, Roger Federer saved five set points in the first set as he scrambled to a 7-6 (7), 6-4 win over 13th-seeded David Goffin and advanced to the Shanghai Masters quarterfinals.

Second-seeded Federer holds a 10-1 winning record against Goffin, including all three matches they've played this year.

Despite the outcome, Federer didn't feel in control of their round-of-16 match.

"I never really felt like I had the upper hand over David today," Federer said. "I thought he took really a lot of good decisions, and he was super fast on his feet today, which I think made it really hard for me to get my freebies and winners off the baseline."

Federer will play fifth-seeded Alexander Zverev of Germany on Friday in the quarterfinals.

Zverev beat Andrey Rublev of Russia 6-0, 7-6 (4) in the last match of the night. The German served for the match at 5-3 in the second set, but couldn't nail down the victory until the tiebreaker.

Earlier, John Isner served his 1,000th ace of the season but it wasn't enough to stop defending champion Novak Djokovic from advancing with a 7-5, 6-3 win. Isner's nine aces against Djokovic took him to 1,007 for the year.

Top-seeded Djokovic is on a 24-0 sets winning streak in Asia dating back to last year's Shanghai Masters. He won his inaugural appearance at the Japan Open last week without losing a set.

"It's always a big challenge returning the serve," Djokovic said. "He's got one of the biggest serves of all time."