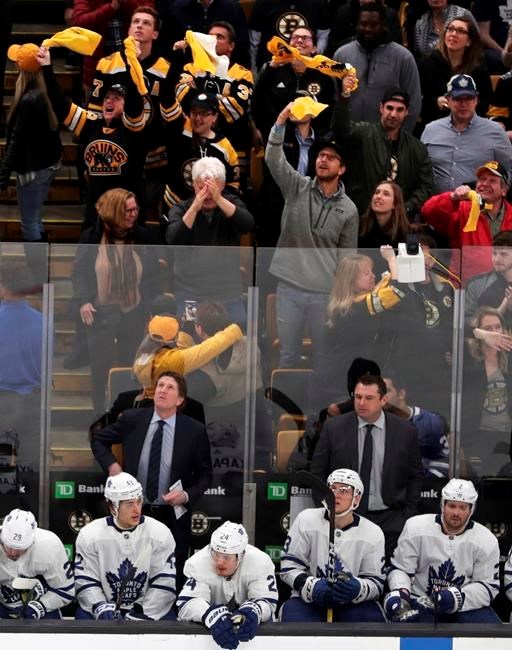 TORONTO — Many NHL players were either not yet born or too young to remember the last time a Canadian team hoisted the Stanley Cup. That trend will continue for a 25th NHL season after all three Canadian teams were eliminated in the opening round of the 2018-19 playoffs.

The Boston Bruins defeated Toronto 5-1 in Game 7 of their Eastern Conference quarterfinal on Tuesday, sending the Maple Leafs to join the Calgary Flames and Winnipeg Jets among the post-seasons early exits. The Ottawa Senators, Montreal Canadiens, Edmonton Oilers and Vancouver Canucks did not qualify for the playoffs.

The last Canadian team to win the Cup was the 1993 edition of the Montreal Canadiens. The inauspicious streak has been threatened a few times — Calgary, Edmonton and Vancouver each made it to Game 7 of a Cup final before being eliminated, while Ottawa also made it to a final series — but this season will mark the eighth straight time two American teams will compete for the iconic trophy.

The only time an American team hasn't been awarded a Cup after the 1993 final was the lost 2004-05 season that was scrapped due to a lockout.

The nadir of Canada's sad streak came in 2016, when not a single one of Canada's seven NHL teams qualified for the playoffs.

It initially looked like the Canadian curse was in danger of being lifted when these playoffs commenced. Calgary entered the post-season as the top team in the Western Conference. Winnipeg and Toronto struggled in the last stage of the regular season, but the Jets were playoff-tested coming off a Western Conference final appearance last season, and the Maple Leafs boasted a deep offence that added John Tavares to a group already including Auston Matthews and Mitch Marner.

In the end, it turned out to be the same story for Canada's NHL teams. Calgary was dumped by Colorado in five games after shutting out the Avalanche in the series opener. Winnipeg was defeated three times at home in falling to rising St. Louis in six games. The Leafs battled gamely, but missed a chance to win the series at home before losing in seven to Boston for the second straight season, and the third time in the last seven years.

Canada's teams will have their chances next season. Calgary, Toronto and Winnipeg are all safe bets to return to the post-season. Montreal, which drastically improved in 2018-19 and battled for a playoff spot until the second-last day of the regular-season, could join them.

Vancouver, with an exciting core of young talent including Elias Pettersson and Quinn Hughes, could make the jump next season, and one would think eventually Connor McDavid will put the underachieving Oilers on his broad shoulders and lead them back into the post-season.

Ottawa, whose struggles on and off the ice are well documented, is unlikely to push for a playoff spot as it continues its rebuilding process.

What was life like the last time a Canadian team won the Cup? Nokia was the top manufacturer of mobile phones, personal computers were running the Windows 3.1 operating system, social media didn't exist, "Unforgiven" had just won best picture at the Academy Awards, Janet Jackson's "The Way Love Goes" topped the Billboard Hot 100 chart and Tiger Woods was two months away from winning his third straight U.S. Junior Amateur Championship.