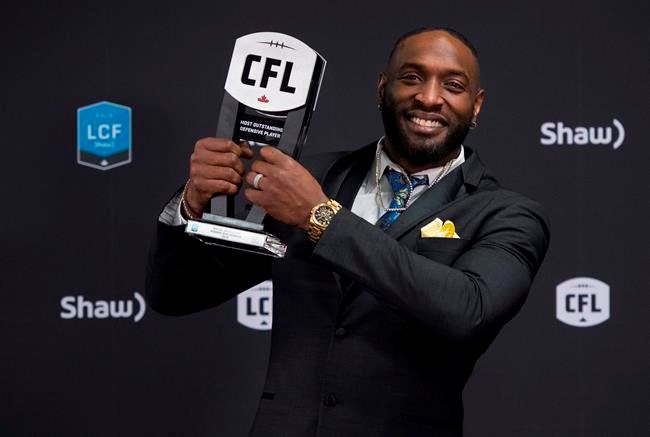 The six-foot-seven, 245-pound Jefferson captured the honour Thursday night at the CFL awards banquet in voting conducted by the Football Reporters of Canada and nine league coaches.

Jefferson, 28, had a career-high 12 sacks in his first season with Winnipeg. He also had a league-record 16 pass knockdowns to go with 24 tackles, an interception, six forced fumbles and two recoveries.

Hamilton Tiger-Cats linebacker Simoni Lawrence was a finalist for the honour. The eight-year veteran led the CFL with a career-high 98 tackles with three interceptions, four sacks and seven pass knockdowns.

The native of Upper Darby, Pa., led all players with 117 defensive plays and anchored a Hamilton defence that posted league-bests in fewest offensive points (17.9 per game) and fewest touchdowns (33) allowed.