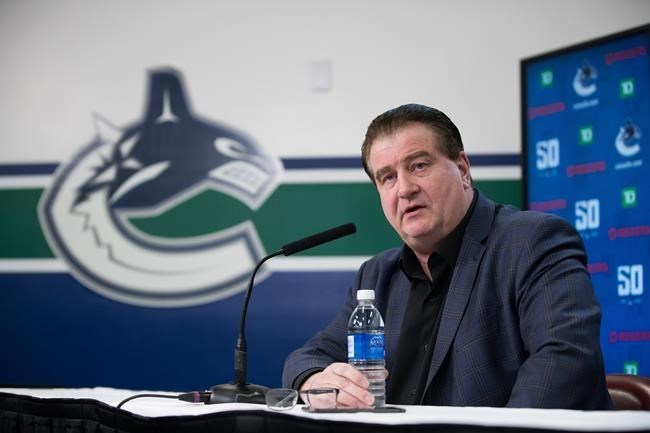 VANCOUVER — Jim Benning has had enough of watching other teams compete in the Stanley Cup playoffs.

On Monday, the Vancouver Canucks general manager tried to boost his team's chances of reaching the post-season for the first time since 2015 when he swung a deal with the Los Angeles Kings to acquire right-winger Tyler Toffoli.

"When we haven't made the playoffs for four years, I call it the 'black hole,'" Benning told assembled media on Tuesday morning. "You have to try to fight and scratch your way out of that to be a playoff team again."

An unrestricted free agent at the end of this season, Toffoli was acquired in exchange for winger Tim Schaller, the rights to sophomore NCAA prospect Tyler Madden and a second-round draft pick in 2020. If Toffoli re-signs with the Canucks, the Kings will also receive a fourth-round pick in 2022.

"Our players have worked hard this year," said Benning. "Our coaches have worked hard for our fans. We want to stay in the race here, coming down the stretch, so we figured this was something we could do to help them."

Canucks coach Travis Green said there's a "lot to like" about Toffoli, who has 18 goals and 16 assists this season and is coming off a hat trick performance in last Saturday's Stadium Series game against the Colorado Avalanche. After a slow start, including a healthy scratch in late October, Toffoli's game has picked up as the season's progressed. That made him one of the most desirable free-agent rentals on the market ahead of the Feb. 24 NHL trade deadline.

"He's played over 500 games in the NHL, he's won in the NHL," Green said. "He understands how hard it is to score, to win a puck battle at certain times of the year, a lot of the things that we talk about. I think it's good timing with Brock being out."

"It's a great addition for us," said Elias Pettersson, who skated on a line with Toffoli and J.T. Miller at the Canucks practice on Tuesday. "He's always been a tough player to play against. I'm happy he's on the team now, and he'll be good for us."

Entering Tuesday's games, the 32-22-5 Canucks were one point out of the lead in the tight Pacific Division standings. The Edmonton Oilers and Vegas Golden Knights were tied for top spot with 70 points. After the Canucks climbed to the top of the Pacific with a red-hot run of 14-3-1 between Dec. 19 and Feb. 2, the team has gone 2-4-0 in its last six games and dropped a 5-1 decision to the Anaheim Ducks in its most recent outing last Sunday.

Benning said he didn't think he would have traded for Toffoli if it hadn't been for some bad news on the injury front. On Tuesday, he said that right-winger Brock Boeser is now expected to be out until the end of the regular season after suffering a rib cartilage injury on Feb. 8.

"He can shoot the puck," Benning said of the 27-year-old Toffoli, who had spent his entire NHL career with the Kings before Monday's trade. "He does a lot of the same things that Brock did for us."

Toffoli said he's excited about the chance to chase a playoff spot through the final six weeks of the regular season.

"Obviously the past three years have been kind of frustrating for the Kings," he said. "To be here and in the race, I don't take it for granted like maybe a little bit before, kind of thinking that you're always going to be in the playoffs and have a chance.

"Time kind of flies. I'm here now and I want to help this team win."

Pearson and Toffoli had battled in junior hockey before the two joined forces with the AHL's Manchester Monarchs and then eventually the Kings.

"It's no secret that we're really good friends," said Pearson. "At the same time, he's a really good hockey player and he definitely should help our team here.

"Ty has played in some pretty key situations," he continued. "He had the assist for an OT Stanley Cup winner. I don't know if it gets any more pressure than that, so he doesn't change his game coming over here at all.

"We're not asking him to do anything that he wasn't doing before. When it's like that and he's going to be playing with good players, that helps out too."

Benning said the team talked to Pearson before they made the deal.

"They grew up playing together in L.A. They're best friends. 'Pears' had nothing but positive things to say about Tyler," Benning said.

Toffoli also practised with Vancouver's first power-play unit, where Brandon Sutter had been subbing in since Boeser's injury.

In addition to updating Boeser's injury status, Benning also reported on Tuesday that forward Josh Leivo, who suffered a fractured kneecap on Dec. 19, is also now expected to miss the rest of the regular season. The team says he will also see a specialist this week.

The Canucks also announced on Monday night that forward Micheal Ferland would also miss the rest of the campaign due to concussion-like symptoms.

After collecting five points in 14 games with the Canucks this season, Ferland was assigned to AHL Utica on a conditioning loan last week. He played just one period last Friday before removing himself from the game.

Toffoli will be in the lineup with his new team when the Canucks play the fifth game of a six-game homestand on Wednesday night against the Minnesota Wild.

This report by The Canadian Press was first published Feb. 18, 2020.