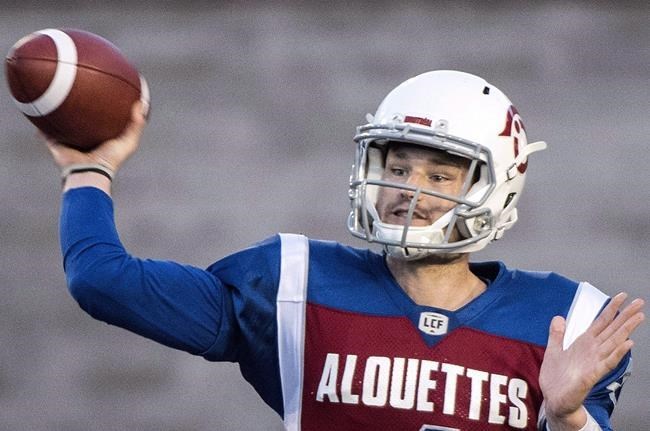 As he continues chasing his football dream, Montreal Alouettes quarterback Jeff Mathews is buoyed knowing regardless of the challenge, someone has his back.

Mathews' older sister, Katie, was paralysed following an '06 auto accident. She suffered a fractured neck and spinal cord injuries when the car she was in flipped after the driver swerved to avoid missing a highway exit.

Now 29, she lives in Seattle and tells her story as a motivational speaker. Brother and sister remain close and speak often. Jeff Mathews says he's continually inspired by Katie's spirit and courage.

"She's amazing," Mathews said in a telephone interview. "She's so strong in how she approaches things and her mindset that it can't help but rub off on you.

"Perspective is definitely one thing but another is when people go through that, what gets them through is how they attack it with their minds. That's probably one of the biggest lessons I've learned from her, to attack everything mentally."

Mathews, 27, was living in California when the accident occurred. His parents divorced in '05 and he went west with his father, a police officer, while his sister lived with their mother in Florida.

"When you look back 13 years, it doesn't even seem like where we are today was a possibility," Mathews said. "That's just a credit to her . . . she's a relentless worker and puts everything she has into growing as a person every day.

"It always feels good to talk with her, we talk about anything under the sun. It's amazing to watch her continually grow and it's definitely an inspiration in my life."

Mathews set 47 school and 18 Ivy League records while playing at Cornell. But pro football success has been fleeting as Montreal is the sixth team Mathews has been with since 2014.

"I think to an extent (pro football) is a nomadic sport," Mathews said. "You're always chasing opportunities but at the same time, yeah, I'm at a place in my life where I'd love to be in one city and play there the rest of my career and establish myself as the starter.

"When I came out of college I wanted to play for one team the rest of my life. Obviously it didn't work out like that but you're chasing opportunity and just hope you get the chance and take advantage of it and do everything you can to make that the last place you'll be."

Bypassed in the '14 NFL draft, Mathews signed with the Atlanta Falcons but was released during training camp. He joined the Indianapolis Colts but was let go just over a week later. Mathews eventually joined the Arizona Cardinals but again was set adrift.

Mathews signed with the Hamilton Tiger-Cats in January 2015, reuniting with head coach Kent Austin, who coached Mathews at Cornell. Mathews went to Toronto as a free agent before the '17 season and earned a Grey Cup ring with the Argonauts before being released in May 2018.

"I'm in the position where I just want a chance to compete, show what I've got, go play and win games," Mathews said. "This is an awesome opportunity coming up and I'm really excited about it."

Familiarity won't be an issue for Mathews at Montreal's camp. But knowing when the quarterback competition officially begins could be.

The CFL and CFL Players' Association are negotiating a new collective bargaining agreement. The present deal expires May 18, the day before camps are scheduled to open.

Montreal is one of four CFL teams — B.C., Saskatchewan and Winnipeg are the others — whose players will be in a legal strike position May 19. They've been instructed by the union not to report if a deal isn't in place.

Players with Edmonton, Calgary, Toronto, Ottawa and Hamilton will report because they won't be in a legal strike position until May 23. That's when the CFLPA could orchestrate a full work stoppage.

"I knew there was going to be some hangups here and there but I really believe both sides want to get it done," Mathews said. "I have a lot of confidence in what's going on there . . . I trust they'll get it done."

Mathews isn't fazed by Montreal's busy quarterback depth chart. Experience has taught him to just worry about what he controls.

"Maybe it bothers you when you're younger," he said. "As you get older, it's like, 'Hey man, if I come in here, do what I'm supposed to do and play to my capabilities, it's not really going to matter who else is in this room.'"

"You always have these quarterback competitions. When you're in it, it's a good time to not worry about what else is going on and just focus on being the best player you can be."