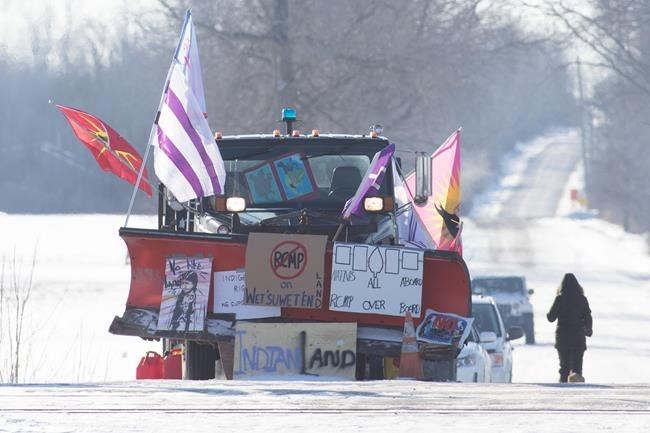 Here is the latest news on protests across Canada over a natural-gas pipeline project in British Columbia:

Edmonton police say two people were taken into custody during a protest at 109th Street and Jasper Avenue in the city.

No other details were released by police, who had asked drivers to avoid the area and find alternate routes.

The Mohawk Nation says its members have agreed to meet with federal Indigenous Services Minister Marc Miller on Saturday morning at a blockade on Tyendinaga Mohawk territory near Belleville, Ont., which is now in its ninth day.

Miller says he has agreed to be present at the CN Rail crossing in the area.

Toronto police have shut down a major downtown intersection due to a protest in support of Wet'suwet'en hereditary chiefs in northern B.C.

Police say on Twitter that the intersection of Yonge and Dundas streets is closed due to a demonstration.

A small group of people from the Mi’kmaq territory of Listuguj in Quebec continue to block a rail line in their community.

Eric Dube, president of the affected railway, says the blockade that began Monday is costing his company about $15,000 a day in lost revenue.

Dube said he spoke to protesters Wednesday and they said they are there for the long haul in support of the hereditary chiefs of the Wet'suwet'en First Nation in northern B.C.

Peter Arsenault, the director of public security for Listuguj, says his department has no plan to remove the "small occupancy" of people from his community camping by the rail line.

He says the police force doesn't want to escalate things and won't attempt to remove the protesters without permission from the band council.

Victoria police say "peaceful" demonstrations at B.C. government offices in the city appear to be wrapping up this afternoon.

However, protesters numbered only in the dozens by midday.

Speaking in Edmonton, Kennedy says Canada produces commodities that are shipped via rail.

He says trains are being shut down "because some angry fringe groups are ignoring the democratically expressed wishes of every First Nation in northern British Columbia."

Kenney says it is up Justin Trudeau to decide how to resolve the dispute when he was asked if he had any advice for the prime minister.

Scheer wants the prime minister to order the public safety minister to tell RCMP detachments to end blockades by supporters of Wet'suwet'en hereditary chiefs opposed to construction of a natural gas pipeline through their territories in northwestern B.C.

But Garneau is dismissing Scheer's remarks.

"This is a complex situation and I think that that does not indicate an understanding of the situation," he said.

Anti-pipeline protesters are outside government offices in Victoria, but no one appears to be prevented from entering buildings.

Groups of demonstrators, numbering between 20 and 100, surround several buildings.

The scene is much different from Tuesday outside the B.C. legislature when hundreds blocked entrances to the building, chanting "shame" and "shut down Canada."

About 20 people near the steps of the government's Ministry of Finance building, right across the street from the legislature, are waving at passing motorists, many of whom are honking their car horns in support.

Roughly two dozen demonstrators outside the government building housing the ministries of Indigenous Relations and Reconciliation and the Ministry of Forests, Lands and Natural Resource Operations, are offering coffee and snacks to passersby.

Canada's largest propane supplier predicts critical shortages of the fuel in central and eastern Canadian markets as a suspension of service on sections of Canadian National tracks continues.

Superior Propane says in a statement released today that the supply shortages will "affect its customers and the entirety of the industry."

Greg McCamus, president of Superior Propane, says the company is unable to move rail cars of propane to supply Central and Eastern Canada and customers who rely on the fuel to heat and power their homes, businesses, farms, hospitals and more will see shortages "in the coming days."

The email says Superior is prioritizing essential service and consumer needs but will be forced to curtail deliveries if railway blockades aren't lifted quickly.

All CN service east of Toronto has been suspended and McCamus says the company is working around-the-clock to increase propane delivery by road but will soon be unable to keep up with capacity.

He calls on all levels of government to ensure resumption of rail operations and avoid supply shortages.

Prime Minister Justin Trudeau says he has no plans to order the RCMP to end the blockades of vital rail links across the country.

Speaking in Munich, where he's attending a global security conference, Trudeau brushed off demands made in Ottawa earlier in the day by Conservative Leader Andrew Scheer.

Trudeau says "we are not the kind of country where politicians get to tell the police what to do in operational matters."

Scheer wants Trudeau to order the public safety minister to tell RCMP detachments to end blockades by supporters of Wet'suwet'en hereditary chiefs opposed to construction of a natural gas pipeline through their territories in northwestern B.C.

Trudeau said Canada has failed Indigenous Peoples for generations and there is no quick fix to problems that have sparked the latest disputes.

Anti-pipeline protests that have shut down Via Rail operations in some parts of Canada are not affecting operations on two lines in Manitoba and Ontario.

Via says it is still operating on a line owned by Hudson Bay Railway between The Pas and Churchill in northern Manitoba, as well as one owned by Canadian Pacific Railway in northern Ontario between Sudbury and White River.

Manitoba Premier Brian Pallister has criticized the blockades and says his government will seek injunctions against any more that might be erected in the province.

One blockade was set up for 24 hours this week west of Winnipeg, and protesters are threatening more action in the days to come.

During a speech in Ottawa, Scheer called on Trudeau to order the public safety minister to use his authority under the RCMP Act to end blockades by supporters of Wet'suwet'en hereditary chiefs who are fighting to stop construction of the Coastal GasLink natural gas pipeline across their traditional territories in B.C.

Scheer says the demonstrations are harming the Canadian economy and disrupting the livelihoods of farmers and small-business owners.

He criticized Trudeau, saying the prime minister has refused to use the term "illegal."

A blockade of rail tracks near Vancouver that paralyzed a key commuter rail service early today has been lifted.

TransLink, which manages operation of the West Coast Express commuter train between Vancouver and the Fraser Valley, says in an email that CP Rail advises the tracks will be in service in time for the homeward commute.

The train carries about 5,000 commuters daily and many of them were stranded in the downtown core Thursday afternoon when opponents of the Coastal GasLink pipeline set up a camp on tracks just east of Vancouver.

About 50 demonstrators have gathered outside at least one government building in downtown Victoria as supporters of Wet'suwet'en hereditary chiefs vow to shut down all government offices in the city until noon today.

Banner-carrying protesters sang and chanted whenever a passing car's horn honked, but they were not blocking the doors.

Earlier in the morning, demonstrators held a brief prayer in the downtown core asking for safety for all involved and a voicing hope that their actions would "open the hearts and minds" of politicians and the public.

The provincial government obtained an injunction Thursday against any further blockades of entrances to the legislature in a bid to prevent protests similar to the one that delayed the throne speech earlier in the week, but few if any pipeline opponents had gathered on the legislature lawns early today. (The Canadian Press, CFAX)

A handful of protesters, many bundled warmly to fend off the -18C chill, milled around blocked train tracks near Belleville, Ont., this morning

Two trucks were parked alongside the tracks and a banner reading "Stop Colonization" hung beside a pickup truck and camper.

Protesters have refused to talk to media and asked reporters to stay hundreds of metres back from the rail lines along a snowy stretch of tracks through the Tyendinaga Mohawk Territory.

CN and Via Rail have suspended operations on large sections of their networks in response to blockades, such as the one in the Belleville area, and an injunction was granted to remove protesters.

Officers in two Ontario Provincial Police cruisers were keeping watch over the demonstration, but were even further from the scene than the media.

Federal Transport Minister Marc Garneau says freedom of expression and the right to peaceful protest are among the most cherished of rights.

But he says he is "deeply concerned" about the disruption of rail services by demonstrators supporting a fight against a pipeline being built across Indigenous territory in B.C.

Speaking in Toronto, Garneau says the disruptions affect all Canadians.

He says the protests affect jobs, livelihoods and the transport of key supplies like food, propane, heating oil, chemicals for water treatment, farming products for export and much more.

The minister says he hopes there will be peaceful resolution to the blockade disputes.

The Mohawk chief who governs the area near a rail blockade in eastern Ontario said he's pleased to see B.C. officials will meet with Wet'suwet'en hereditary chiefs.

Tyendinaga Chief Donald Maracle says the blockade near Belleville was not initiated by his council but has remained peaceful and people are waiting to see what the government's response will be.

He says this is a time of passion but says it's time for "patience and calm and dialogue."

An injunction has been granted to remove protesters from the Belleville-area blockade.

The demonstration has caused CN and Via Rail to shut vast portions of their networks.

A spokesman for Canadian National confirms a rail blockade that has halted train traffic to and from the Port of Prince Rupert has been lifted.

First Nations leaders raised the possibility Thursday that the four-day blockade could be lifted if federal and provincial politicians agreed to meet to discuss solutions to the ongoing dispute over construction of a natural gas pipeline through Wet'suwet'en traditional territories in northwestern B.C.

All parties have agreed to that meeting, although a date must still be arranged.

Jonathan Abecassis with CN says the blockade was removed overnight.

Prime Minister Justin Trudeau says Canada has failed Indigenous peoples for generations and there is no quick fix to issues sparked by construction of a natural gas pipeline on Wet'suwet'en traditional territories in British Columbia.

He says Canada is a country of laws and those laws must be enforced, but "getting the balance right" is important.

The prime minister called on all parties to move toward reconciliation.

Trudeau is in Munich today at a security conference

This report by The Canadian Press was first published Feb. 14. 2020

Chinatowns across Canada report drop in business due to new coronavirus fears
Feb 27, 2020 2:00 AM