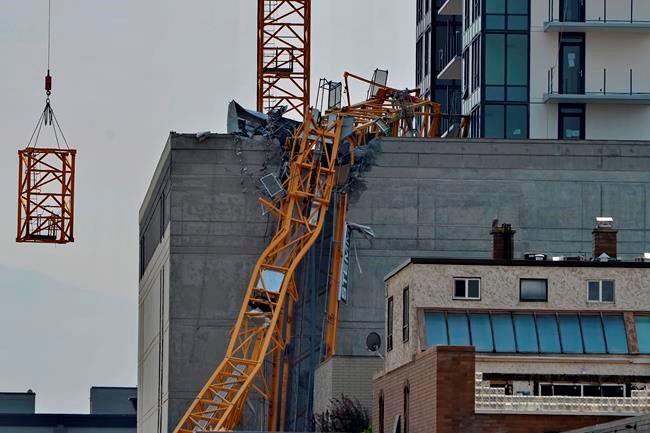 KELOWNA, B.C. — An evacuation order has been lifted in an area around the British Columbia construction site where five people died after a crane collapsed.

Central Okanagan Emergency Operations says the collapsed crane in downtown Kelowna has been disassembled and removed, just over a week after its arm toppled from above a 25-storey residential tower under construction.

The emergency centre says in a statement that power and gas have mostly been restored since the collapse knocked out the utilities, except for gas at a "physically impacted" building that remains closed for a structural survey by the owner.

While the evacuation order and the state of local emergency declared by the city have been lifted, residents of one other building are being asked to wait to return home until Thursday to allow more time for restoration work.

The crane was being dismantled when it collapsed, killing four workers while a fifth man died when it crushed a neighbouring building where he was working.

The BC Coroners Service, RCMP and WorkSafeBC, the provincial safety agency for workers, are each conducting investigations into the deaths.

This report by The Canadian Press was first published July 21, 2021.

Where will homelessness rise or fall? A federally funded AI has some predictions
Aug 3, 2021 2:00 AM