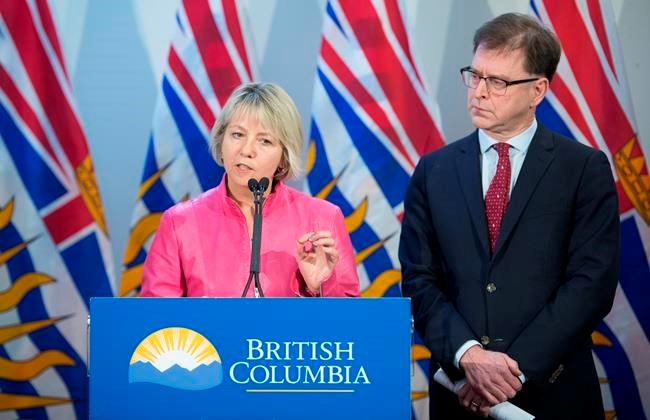 VANCOUVER — A third case of a new coronavirus that's behind deaths in China has been confirmed in Canada by health officials in British Columbia, who say a man in his 40s tested presumptively positive after a business trip to the Chinese city of Wuhan.

Dr. Bonnie Henry, provincial health officer, said the man who lives in the Vancouver area returned last week and had symptoms about 24 hours later, when he voluntarily isolated himself at his home and called a clinic.

The man is doing well at home and no members of his family have shown any symptoms as they are being monitored by health officials, Henry added.

A second test will be done at the National Microbiology Laboratory in Winnipeg and results are expected in the next two days, Henry told a news conference Tuesday.

"Given the history of travel and the contact that this person had in Wuhan city, and they were showing symptoms, we are confident that this is truly a case of this novel coronavirus," she said.

The patient spent most of his time in the port city of Guangzhou and visited Wuhan, the city at the centre of an outbreak in that country, where millions of people have been quarantined and the number of cases has increased to almost 6,000 across China.

Chinese authorities report that more than 100 people have died there of the novel virus that is believed to have originated at a market in Wuhan, where meat was sold alongside live animals.

The man who returned to Vancouver contacted a primary health-care provider on Sunday to say he had travelled to Wuhan. He had no symptoms on the plane back to Vancouver, said Henry, who expects more people in B.C. to test positive for the virus.

Several people have been assessed in the province and the risk of the virus spreading remains low, she said.

"We need to be very careful about listening to rumours and third- and fourth-hand information," she said, adding people should rely on credible sources for information.

"It's very challenging and what's concerning to me, having been in the city of Toronto during the SARS outbreak and being one of the people responding there, is how easily those rumours can lead to discrimination, inappropriate discrimination against people, and I think we need to take all those rumours with a grain of salt and recognize they are just that — rumours."

B.C. Health Minister Adrian Dix said the province will provide ongoing information to the public and all the necessary precautions are being taken, adding social media has allowed rumours to spread quickly, something that didn't happen during the SARS outbreak in 2003, when 44 Canadians died.

"We are determined to provide the information that the public needs," he said.

Multiple systems are in place to prepare for, detect and respond to infectious diseases, Dix said.

The BC Centre for Disease Control has developed a diagnostic test for the new coronavirus and is working to ensure potential cases can be detected quickly and accurately.

Several countries have flown their citizens out of China as the novel virus spreads in that country and beyond to countries including Cambodia, Japan, Thailand, South Korea, Sri Lanka, Taiwan, Singapore, Malaysia, Vietnam, Nepal, Australia, France, Germany, the United States and Canada.

Unlike some other countries including the U.S., Canada has not repatriated any citizens.

"Not all residents or visitors in the area that are Canadians do want to come back. And so we're working through some of those details about what that might look like," she said in Ottawa.

Canadians considering a trip to China should adhere to travel advisories, she said.

"There are increased advisories for the area of Hubei, the province of Hubei, to let travellers know that non-essential travel should not be considered at this time," she said.

"That's not so much about, by the way, contracting the illness. It's because of the significant quarantine making it very difficult to move around the region. There is no transportation in and out of 18 cities in China. That number may grow."

Hajdu echoed Henry's concerns about misinformation sparking fears and said people should rely on government sources to ensure they are not unnecessary being fearful of a virus that remains at a low risk to spread in Canada.

The federal government will be putting additional public health officials at airports to meet passengers from Chinese flights and ensure they have written information and can speak with someone who can explain the steps they need to take if they end up developing symptoms, she said.

This report by The Canadian Press was first published Jan. 28, 2020.

Note to readers: This is a corrected story. An earlier story said man spent the majority of his time in Wuhan.