Long-term care home report and sale of Torstar; In The News for May 27 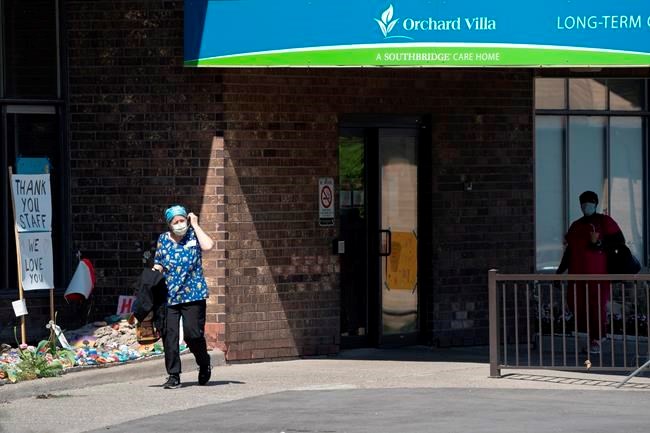 In The News is a roundup of stories from The Canadian Press designed to kickstart your day. Here is what's on the radar of our editors for the morning of May 27 ...

The British Columbia Supreme Court is scheduled to release a key decision today in the American extradition case of Huawei executive Meng Wanzhou.

Justice Heather Holmes is releasing her ruling on the issue of so-called double criminality.

The legal arguments centre on whether the allegations Meng is facing in the United States would be a crime in Canada.

The decision could lead to her release or it could start a new round of legal arguments, including whether her arrest at Vancouver's airport in December 2018 was unlawful.

The United States has charged her with fraud over allegations she violated American sanctions against Iran, which she and the Chinese telecommunications giant have denied.

Her lawyers have argued the court should dismiss the case because Canada has rejected similar sanctions, while the Crown has said the judge's role is to determine if there's evidence of fraud.

Torstar newspaper chain to be sold...

The Toronto Star and its Torstar Corp newspaper chain said Wednesday it has agreed to be sold for $52 million (US$38 million).

The transaction will see the Toronto-based media company taken off the public stock market by NordStar, a firm run by businessmen Paul Rivett and Jordan Bitove.

Under the terms of the transaction, NordStar will acquire all of the issued and outstanding Class A shares and Class B non-voting shares of Torstar for 63 cents Canadian (US$46 cents) per share.

Torstar's shares closed at 40 cents at the end of trading Tuesday, but the company says the 63 cents per share it agreed to represents a nearly 67 per cent premium on the 20-day volume-weighted average trading price of the Class B non-voting shares.

Torstar says the deal was recommended by a special committee and has the support of the majority of its shareholders and its largest independent shareholder, Fairfax Financial Holdings Ltd.

Rivett recently retired from his role as president of Fairfax Financial Holdings, while Bitove is best known for helping found the Toronto Raptors basketball team. Torstar holds an investment in The Canadian Press as part of a joint agreement with subsidiaries of the Globe and Mail and Montreal's La Presse.

Members of Parliament will make history today as a few dozen of them gather in the House of Commons, where they'll be joined by the other 300-odd MPs participating via videoconference.

The new hybrid of in-person and virtual proceedings goes into effect today after the NDP joined forces Tuesday evening with the Liberals to waive normal sittings of the House of Commons for another four months while the country continues to grapple with the COVID-19 crisis.

Instead, they voted in favour of a government motion to continue with an expanded version of the special COVID-19 committee that has acted as a stand-in for the chamber over the past month.

The committee has been meeting twice a week virtually and once a week with a small group of MPs physically present in the Commons.

Starting today, all special committee meetings will be a mix of virtual and in-person,  with most MPs participating via big screens set up on either side of the Speaker's chair.

And there'll be four meetings each week, Monday to Thursday, until mid-June.

One dead in "brazen" Toronto shooting...

Police say a 21-year-old man is dead and a boy and a woman were wounded in a shooting in downtown Toronto.

Saunders said the two males were targeted and the woman was an innocent bystander.

Police originally said the male victim who died was 16.

"We don't know where the victims were coming from. They were walking in two groups of two," Saunders told a news conference Tuesday on the street near the shooting scene.

"As they crossed on to the west side of the curb, that is when the suspect vehicle made a U-turn and engaged in firing."

Dominic Cummings helped Boris Johnson win power by pitting the people against the elite. Johnson's Conservative administration has branded itself "the People's Government."

The prime minister's populist appeal has been hammered by news that, as the coronavirus outbreak raged, chief adviser Cummings drove 250 miles (400 ) to his parents' house while he was falling ill with suspected COVID-19 — allegedly flouting lockdown rules that the government had imposed on the rest of the country.

Cummings says he to the family farm in northeast England so that his nieces could care for his four-year-old son if he and his wife both became sick. But that explanation cut little ice with many Britons, who say they have endured isolation, anxiety and sometimes loss in order to follow government advice to "Stay Home ... Save Lives."

"I have constituents who didn't get to say goodbye to loved ones; families who could not mourn together; people who didn't visit sick relatives because they followed the guidance of the government," Ross wrote in a resignation letter. "I cannot in good faith tell them they were all wrong and one senior adviser to the government was right."

Johnson, however, appears determined to hang onto an aide who has been dubbed "Boris' brain," even if it fractures his government and erodes Britain's response to the pandemic.

This report by The Canadian Press was first published May 27, 2020