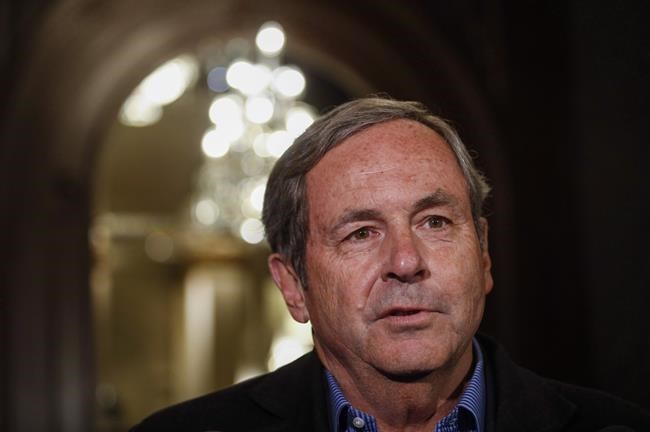 OTTAWA — Canada’s former ambassador to the United States has been cited by the federal ethics watchdog for improper lobbying after he left office, and barred from contact with senior ministers and political officials.

David MacNaughton was Prime Minister Justin Trudeau’s point man in Washington for 3 1/2 years before he left one year ago.

After leaving office, he arranged multiple meetings over March, April and May of this year between senior government officials, ministers and Palantir Technologies Canada.

Among those in the meetings were Deputy Prime Minister Chrystia Freeland, Industry Minister Navdeep Bains and chief of defence staff Gen. Jonathan Vance.

In all, nine ministers, aides and top public servants were involved.

Ethics commissioner Mario Dion says none of those officials can have official dealings with MacNaughton for a period of one year as a result of improper lobbying.

Silicon Valley billionaire Peter Thiel founded the data-analytics company in 2003, where MacNaughton now works. The company is set to go public next week.

Palantir amasses vast quantities of data and hunts for patterns in it, selling access to companies and governments, including security agencies.

The meetings MacNaughton arranged came as governments were looking for ways to track COVID-19 cases.

Dion said in a ruling that MacNaughton opened doors for the company to key Liberal government players as part of an offer for pro bono help in the government’s pandemic response.

In all, there were 17 meetings or communications cited by Dion as troubling.

Dion says none of the meetings resulted in a contract for Palantir. The company did land a contract with the U.S. Centers for Disease Control and Prevention to help the agency better stay on top on the spread of the novel coronavirus and the disease it causes.

"Mr. MacNaughton has acknowledged, with the benefit of hindsight, that these communications and meetings, to the extent they could have furthered the interests of Palantir, were contrary" to the ethics law, Dion writes.

NDP ethics critic Charlie Angus said the ruling was a damning indictment of how the Trudeau government operates, questioning how the ministers and officials didn't see a conflict of interest.

"It's their disregard for the rule of law that gets this government in trouble time and time again," Angus said.

"With a company like this, I don't think it's acceptable that they can be so flippant and so willing to disregard the rule of law in Canada."

This report by The Canadian Press was first published Sept. 16, 2020.

Demonstration in Fredericton as private abortion clinic to lose its doctor
Sep 26, 2020 11:19 AM