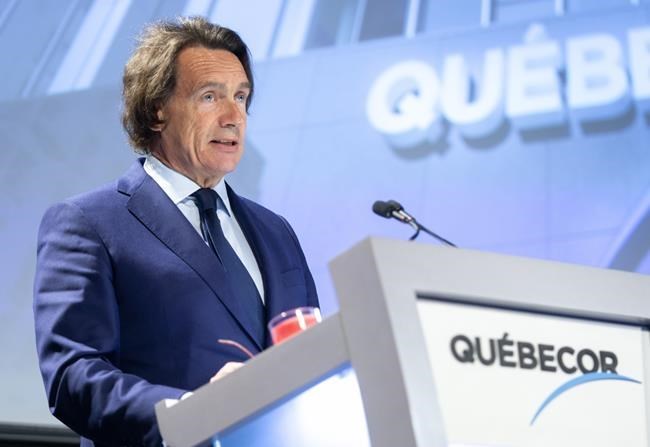 MONTREAL — Quebecor Inc. raised its dividend as it reported its fourth-quarter profit rose compared with a year ago.

The company said Thursday it will now pay a quarterly dividend of 27.5 cents per share, up from 20 cents.

The increased payment to shareholders came as Quebecor says it earned net income attributable to shareholders of $159.8 million or 64 cents per diluted share for the quarter ended Dec. 31.

The result compared with a profit of $145.1 million or 57 cents per diluted share a year earlier.

"We controlled our operating costs and adjusted our capital expenditures for physical and intangible assets to maintain our industry‑leading status going forward while being prepared to deal with future challenges," Peladeau said in a statement.

The overall increase came as telecommunications revenue rose to $940.9 million, up from $908.6 million a year ago.

However, Quebecor's media division saw revenue fall  to $185.8 million from $208.0 million a year ago and sports and entertainment revenue dropped to $48.8 million compared with $54.7 million in the fourth quarter of 2019.

For the fourth quarter, Quebecor reported a net increase of 43,000 "revenue‑generating units" — made up of subscriptions to its internet service, television and Club illico services, and connections to its mobile and wireline telephone services.

"Showcasing Quebec artists and supporting the vitality of our culture remain core priorities for us and we are very proud of these acquisitions and initiatives," said Martin Tremblay, chief operating officer of Quebecor Sports and Entertainment Group.

"Expanding our complement of distribution platforms positions us to continue building a diversified ecosystem for the benefit of promoters, artists and everyone in Quebec who loves music and culture."

This report by The Canadian Press was first published Feb. 25, 2021.

Companies in this story: (TSX:QBR.B)