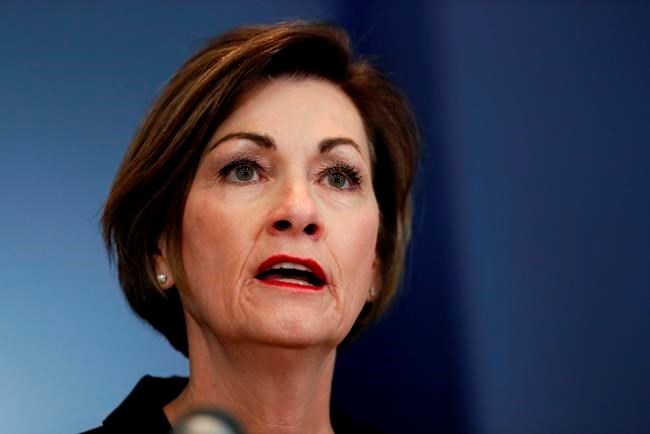 IOWA CITY, Iowa — Iowa’s $26 million contract to increase coronavirus testing was reached after the governor acted on a tip from actor Ashton Kutcher, a revelation that increased skepticism about the no-bid deal on Thursday.

Critics of Gov. Kim Reynolds said they were puzzled by the celebrity’s cameo in Iowa’s outbreak response, particularly when the state has been slow to tap some of its own experts.

But the governor said Kutcher’s role gave her partnership with a slate of Utah companies an Iowa . And Kutcher said he was simply using his connections to offer a creative solution that could help his native state.

The governor said the tip came when she called Kutcher to ask him to record a public service announcement urging residents to stay home.

Kutcher asked whether she'd heard about TestUtah, a public-private partnership that had started coronavirus testing and “looked very promising,” the governor recalled.

Kutcher said that he had a tech executive friend working on TestUtah and offered to arrange a meeting. Reynolds spoke with Kutcher's associate and her aides soon connected with the office of Utah Gov. Gary Herbert.

“We were able to start that conversation and ramp it up relatively quickly,” Reynolds said.

Last week, Iowa signed a $26 million contract with Nomi Health, a Utah startup that says it's developing a “modern payment system for healthcare."

Under the contract, Nomi Health will supply 540,000 coronavirus tests to Iowa over the next six months. Its partners include Utah-based Co-Diagnostics, which recently received federal approval to sell COVID-19 testing kits, and tech firms Qualtrics and Domo.

The companies will run the TestIowa where residents take voluntary assessments to determine whether they qualify for testing and arrange appointments.

Kutcher said in a statement he is "good friends” with Qualtrics CEO Ryan Smith, whose company is providing Iowa's online assessment tool. He and Smith had discussed a technical approach to scale up rapid testing that got around the shortages in testing materials slowing them down elsewhere.

“They were already proving it in Utah and getting folks tested at a rapid rate. They had also built a very smart specimen tracking system that I felt made it easy for people to do,” Kutcher said.

Kutcher said Qualtrics' idea was in line with one recommended by a company he has invested in, Radix Labs, which isn't part of Iowa's contract. His publicist said Kutcher is not an investor in any of the companies involved in Iowa’s deal.

Kutcher said he had been talking to Reynolds, one of the few governors who hasn't issued a statewide stay-at-home order, about tightening social distancing rules because he saw data showing the virus was spreading fast.

He said the governor “jumped at the chance and moved fast to implement” his testing pitch.

“When the federal government is playing hunger games with the states during a pandemic, we have to get creative,” Kutcher said.

In a Qualtrics news release, Reynolds said the company's product will save lives by helping Iowa monitor the virus and determine where to put testing sites.

Reynolds launched a #TestIowaChallenge campaign on Twitter urging residents to complete the assessments, which ask for personal health and contact information. The governor challenged Kutcher, who recorded a promotional video. More than 80,000 people completed assessments in the first 24 hours.

The contract requires the companies to safeguard the confidential assessment data and either return or destroy it when the program is over.

The program aims to triple Iowa's testing capacity by adding 3,000 tests per day, which will be conducted at mobile sites around the state. The first testing begins Saturday in Des Moines.

Reynolds revealed Kutcher's role when asked why she didn’t consider Iowa-based institutions or companies for the contract. The governor said the deal “has an Iowa touch."

Kutcher grew up in Cedar Rapids, graduated from high school in Tiffin and became a model while attending the University of Iowa. He hit it big on “That ‘70s Show" before starring in movies such as “Valentine’s Day" and “No Strings Attached.”

Critics questioned why the governor took input from Kutcher but doesn't appear to have consulted top Iowa experts on the contract.

“Mr. Kutcher seems like a great guy but not sure what public health expertise he brings for advising our pandemic response,” said Democratic Sen. Joe Bolkcom, who has faulted the governor for failing to protect workers during the pandemic. “But if he’s available, maybe he can go inspect the meatpacking plants."