The world’s top chuckwagon drivers will make their final stop in Balzac for the next five seasons, as Century Downs Racetrack and Casino will host the 2019 to 2023 World Professional Chuckwagon Association (WPCA) finals.
Oct 23, 2018 12:01 AM By: Scott Strasser 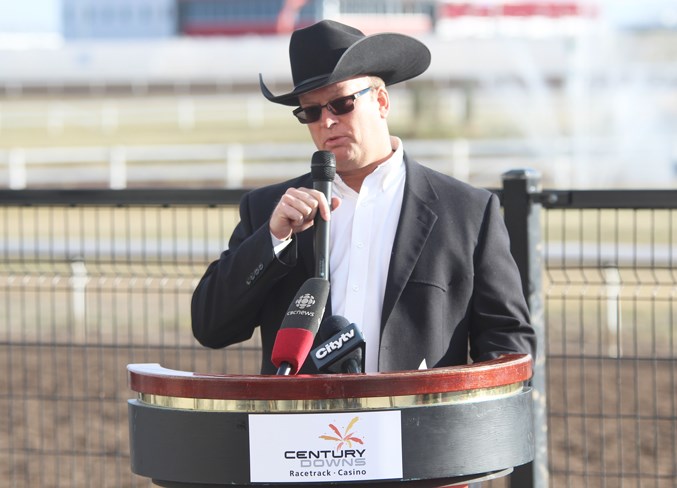 WPCA Director of Marketing Bryan Hebson announced Oct. 18 the world championships for chuckwagon racing will be held at the Century Downs Racetrack and Casino, in Balzac, for the next five years.

The world’s top chuckwagon drivers will make their final stop in Balzac for the next five seasons, as Century Downs Racetrack and Casino will host the 2019 to 2023 World Professional Chuckwagon Association (WPCA) finals. According to WPCA Director of Marketing Bryan Hebson, hosting an official championship for the Pro Tour will differ from what the association has done in previous years. “In the past, our last show of the season has been Rocky Mountain House, and, in the past, other venues,” he said. “We’ve never had the true type of finals format that we’ll have at Century Downs.” According to Hebson, there will be a qualification format throughout the WPCA Pro Tour next summer, with a point system created for drivers to qualify for the championship. He added the championship’s format will be announced in early 2019. Joining in the Oct. 18 announcement, held at the Balzac-based horse-racing venue, were four WPCA drivers, including four-time Calgary Stampede champion and three-time world champion Kurt Bensmiller. He said bringing the WPCA finals to Century Downs will be beneficial for the sport of chuckwagon racing. “It’ll be one of our premier events for the whole season and I’m excited to try and defend my title here, next year,” Bensmiller said. “We’ve been looking for something missing on that ‘finals’ aspect to really bring in the crowd. “These guys are going to do it up right and it should be a good show.” With more than $100,000 to be paid out on Championship Sunday, next summer’s event will not just be an opportunity for WPCA drivers to compete for the title of world champion – the competition will also boast one of the richest prize-money payouts in the sport. “For all the drivers, it’s another venue to have a chance to win some more money, and I’m looking forward to it,” said 2012 Calgary Stampede champion Troy Dorchester. “It’s a great spot, it’s beautiful here and I can’t wait to be back.” Century Downs’ 5.5-furlong racetrack opened April 1, 2015. The venue hosts standardbred and thoroughbred racing throughout the year, with its second season of thoroughbred racing set to wrap up at the end of October. According to Century Downs General Manager Paul Ryneveld, portable grandstands will be brought in for the WPCA finals next year, to accommodate the expected attendance of 15,000 fans. He said permanent expansions to the venue are also in the works. “There are plans down the road to expand this building and facility, as it’s proven to be popular in the market place,” he said. “Horse racing has a spot in the Calgary market. As this place expands, we think this event can expand.” Past economic impact studies have indicated WPCA Pro Tour events can bring anywhere from $3- to $6-million into a local economy, Hebson added. “For the Rocky View region, we anticipate a significant economic benefit,” he said. “If you look at all the retail back there, you bring in 10 to 15 thousand people in this area, they’re going to be shopping, there’s groceries, fast food.” The 2019 WPCA Pro Tour will kick off in Grande Prairie May 29. The pro tour will include 10 stops in towns and cities in Saskatchewan, Alberta and British Columbia, with an expected 140,000 total fans in attendance.