The Word Professional Chuckwagon Association (WPCA) has announced the format for its inaugural World Finals competition, to be held at the Century Downs Racetrack and Casino in Balzac from Aug. 21 to 25.
Jan 29, 2019 12:01 AM By: Scott Strasser 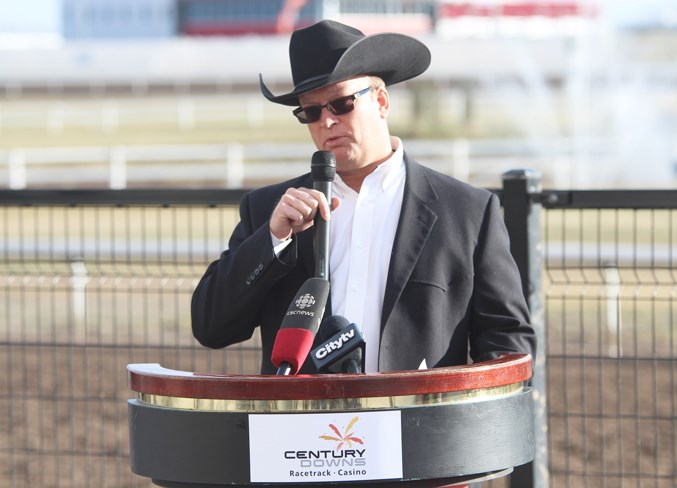 The WPCA has announced the format for next summer&#8217;s world chuckwagon racing championship, which will be held at the Century Downs Racetrack and Casino, in Balzac. Pictured: WPCA Marketing Manager Bryan Hebson, during the original Oct. 18, 2018, announcement about the event.

The Word Professional Chuckwagon Association (WPCA) has announced the format for its inaugural World Finals competition, to be held at the Century Downs Racetrack and Casino in Balzac from Aug. 21 to 25. The World Finals will cap off the WPCA’s 2019 Pro Tour, which will see 37 of the best drivers in the sport competing in towns and cities across Saskatchewan, Alberta and British Columbia throughout the summer. According to a press release from the WPCA, the five-day event at Century Downs will include $300,000 in awards and prize money – ranking it among the four highest-paying events in chuckwagon racing. “This is huge for chuckwagon racing,” said Bryan Hebson, who runs marketing, media and sponsorship for the WPCA. “There was never a true ‘finals’ and a championship format [before].” But before the drivers can get there, they will first have to qualify. To compete at the World Finals, WPCA drivers must finish among the top 12 in the association’s point standings following the final stop on the Pro Tour, before the World Finals. This year, that will be in Rocky Mountain House from Aug. 15 to 18. “[The drivers’] consistency is going to have to be important,” Hebson said. “On any given night, anyone can win a show in the WPCA.” The first four nights of the World Finals will see the 12 qualified drivers racing in three heats, with each participant’s heat determined by their point standings. The 12 finalists will compete under a playoff point system, with points awarded based on their daily running times and playoff aggregate time. Daily payouts will total $125,000 during the first four days. The four drivers with the most points after the first four days of competition will advance to the Century Downs Winners’ Zone Championship Dash Aug. 25 – when the four finalists will race for a $50,000 payout, a horse trailer valued at more than $30,000, trophy buckles and the prestige of being named the inaugural Century Downs Winners’ Zone champion. “The best of the best in chuckwagon racing are in the WPCA, and it just gives the fans a little bit more to follow,” Hebson said. Along with the Winners’ Zone championship, each heat on the final day will include a “dash for cash” with a total payout of $60,000, and the driver with the best aggregate time after the first four nights will receive $5,000. Century Downs Marketing Manager Karen Franco said hosting the WPCA’s flagship championship is a great opportunity for the 5.5-furlong track, which opened as a horseracing venue in April 2015. “We love to have the chance to showcase our facility to an even broader audience than we already reach,” she said. “And what better way than something as Alberta-made as chuckwagon racing?” According to Franco, the racetrack will need to undergo some changes to accommodate the WPCA World Finals, including the installation of portable grandstands. She said planning is already underway, as Century Downs gets set to welcome an estimated 15,000 fans for the event. “It will require a change to our track, and there will be a lot of infrastructure needed to support such a big event over the five days it will be here,” she said. “Temporary seating [is needed], and the track has to be changed to accommodate the figure-eight associated with chuckwagon racing. “There’s a fair share of work that needs to be done.” Tickets for the 2019 WPCA World Finals should be on sale on the Century Downs website by the end of February, according to Franco.