U16 hammer throw athlete ranked No. 1 in Canada

A member of the Airdrie Aces athletics club is riding high after posting the farthest distance in Canada for the U16 women’s 3 kilogram (kg) hammer throw. Fourteen-year-old Jinaye Shomachuk recorded a throw of 49.
Jul 19, 2018 12:01 AM By: Scott Strasser 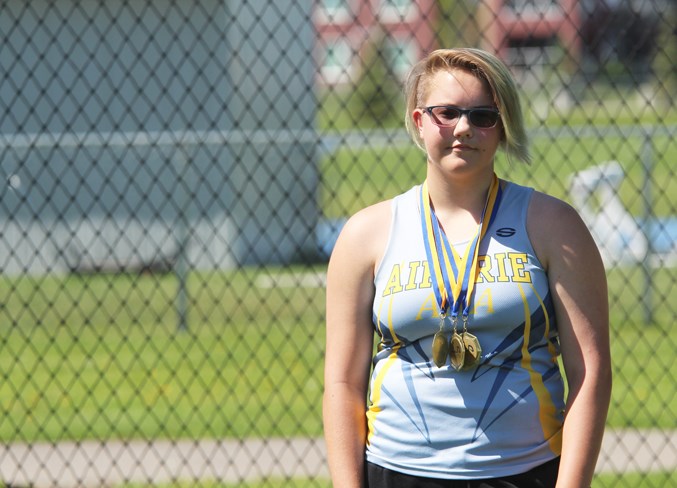 A member of the Airdrie Aces athletics club is riding high after posting the farthest distance in Canada for the U16 women’s 3 kilogram (kg) hammer throw. Fourteen-year-old Jinaye Shomachuk recorded a throw of 49.07 metres (m) at the provincial track and field meet for bantam, midget and youth athletes, July 14 in Calgary. The distance puts her atop the hammer throw rankings nationwide for the midget age group. Shomachuk’s impressive throw – which won her the gold medal – was more than 16 metres farther than her nearest competitor and was a personal best. “I had a goal set in mind because hammer’s been a really important event for me,” she said. “I’ve always liked it and wanted to excel at it." Despite being only 14, Shomachuk’s 3 kg hammer throw distance places her in the top eight nationwide for U18 women, and is the top distance for U18 women in Alberta. “It was a little unbelievable when I saw that,” she said. “My coach has always said I have a natural talent for it. To know in Canada I’m doing really well is great. “Recently, things have been picking up for me. Lately, I’ve been taking my training a lot more serious, and I guess it’s starting to show.” But it’s not just hammer throw that the Bert Church High School student excels at. Shomachuk followed up her gold medal performance in hammer throw with two more first-place finishes; she earned gold in the women’s U16 shot put with a distance of 12.11 m and first-place in discus with a throw of 35.26 m. Her gold medal performance in the discus throw was also a personal best and beat out the second-place thrower by 10 m. “She’s just an amazing girl,” said Aces president and distance coach Jodie Matsuba-Szucs. “She was at nationals last year, and was fourth in the hammer. The three girls ahead of her were second-year midget, so it’s hers for the taking (this year).” Shomachuk’s next step will be to compete at the Alberta Summer Games, which take place in Grande Prairie from July 19 to 22. After that, she’ll be focused on preparing for nationals in mid-August. The Bert Church student, who heads into Grade 10 in September, said her long-term goal is to eventually compete in the Olympics in hammer throw. She said she’s also started looking at universities. “I’ve been looking at going to the University of Saskatchewan but I’m looking at a few other universities, as well,” she said.