A pair of losses in the last week has left the Junior B Rockyview Silvertips with a 1W-6L record in the Rocky Mountain Lacrosse League. But head coach Gord Henry believes the last two games will help move the team back into the win column.
Jun 4, 2010 12:00 AM By: Airdrie Today Staff 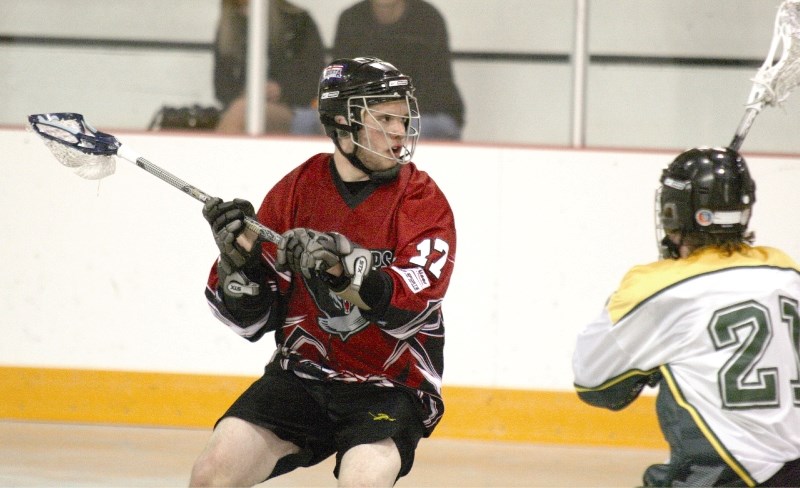 The Silvertips&#8217; Mitch Gallagher lines up a shot in a recent home game. The team will travel to Saskatoon for a pair of games June 5-6, before returning to the Pete Knight Arena, June 12.

A pair of losses in the last week has left the Junior B Rockyview Silvertips with a 1W-6L record in the Rocky Mountain Lacrosse League.

But head coach Gord Henry believes the last two games will help move the team back into the win column.

The Silvertips lost to the Red Deer Rampage in Red Deer, May 30, following a devastating 19-3 loss to the Calgary Jr. Mountaineers, May 27 in Cochrane.

“In the Red Deer game, we started off slow and were down 5-0 in the first 10 minutes,” Henry said. “We ended up losing 8-6, but the last 50 minutes, we outplayed them. Basically, what happened there, is all our young guys and all our new guys figured out it’s all about the work ethic. It was an awesome last 50 minutes.”

Henry said the work ethic was lacking in the last few games, thus he decided to make a few lineup changes in the blowout loss to the Jr. Mountaineers.

“We got our butts handed to us and some of my players realized they weren’t really ready to play,” he said.

“These young kids have never really played the game at a high level and they weren’t working hard in practice. But yesterday (the May 30 game in Red Deer) was the result of Thursday night’s game as the work ethic came in. They really learned last night what it takes to play. We have to outwork teams and we did. We just didn’t get enough goals in the end. But there were a lot of lessons learned. Despite the results, it was a great week, actually.”

The Silvertips hope this newly found work ethic will carry over to the weekend, as the team will travel to Saskatoon June 5-6 for two games against the Saskatchewan SWAT.

“They’re in very good shape and they’re a hard-working team,” Henry said. “They’re a solid club, but in the past, we’ve been competitive with them. And as our skills pick up, and if we can maintain that work ethic and that attitude, we’ll start winning.”

Rockyview’s next home game will be on June 12 at the Pete Knight Arena in Crossfield, when it hosts the Edmonton Warriors. Game time is 3 p.m.