The Airdrie Thunder can cross October off its schedule – without any blemishes along the way. The Junior B hockey team won all nine of its games last month, culminating in a 5-4 home win over the Three Hills Thrashers on Oct.
Nov 5, 2010 12:00 AM By: Airdrie Today Staff 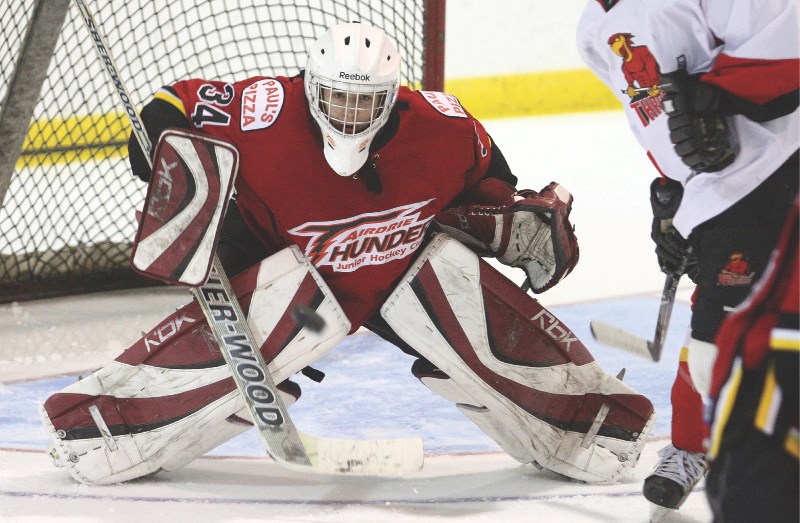 Thunder netminder Jeff Gardiner keeps his eyes locked on the puck during second period action of Airdrie&#8217;s 5-4 win over the Three Hills Thrashers on Oct. 30 at the Ron Ebbesen Arena. The team extended its nine-game season-opening unbeaten streak the following night with a 6-1 road win over the Strathmore Wheatland Kings.

The Airdrie Thunder can cross October off its schedule – without any blemishes along the way.

The Junior B hockey team won all nine of its games last month, culminating in a 5-4 home win over the Three Hills Thrashers on Oct. 29 and a 6-1 road win over the Wheatland Kings in Strathmore on Oct. 30.

Alex Hustad led the scoring against Strathmore, with a hat trick, while Travis Wallan had a three-goal effort against Three Hills. Jeff Gardiner earned the win in net in the first game, while Logan Marlow claimed the ‘W’ in the second.

“We’ve broken the season down into four nine-game segments and we hit our goal for the first nine,” said Thunder head coach Darryl Einarson. “We know a loss is going to be inevitable because we’re playing so many good teams, so you just want to keep getting better.”

After Three Hills opened the scoring 41 seconds into Friday’s game, Wallan scored twice and Abdo Hammoud added another, as Airdrie built up a 3-1 lead. The Thrashers made it 3-2 with 36 seconds left in the first, and looked as if they had the momentum.

The Thunder’s Mark Rollo scored on an off-angle shot early in the second and Wallan’s third made it 5-2 two minutes into the third. Three Hills made it 5-3 two minutes later and continued to out chance and out shoot Airdrie.

But Gardiner and the Thunder defence stood its ground to secure the win.

“We seemed to be a little out of sync on Friday. We got out to a 5-2 lead, and we let them back in, but I was really pleased the way we hung in there in the third period,” Einarson said. “A lot of guys had fabulous games and Gardner is at the top of that list. It is a character win and you find out as a coach who excels in certain situations. Three Hills played a really good game and they’re going to be a team we’ll have to watch in the future.”

“We got out to a lead and seemed to be cruising at 3-0, so it was a good situation to not be in a panic like the night before,” Einarson said. “One of the constants of our season is goaltending and we played well with the lead. We are playing better as a team, but we’re going to have a lot of tests and know the next half-dozen games are going to be tough.”

Airdrie will play a home-and-home with the Red Deer Vipers this weekend. Game one is at 8 p.m. on Nov. 5 at the Ron Ebbesen Arena, with the rematch taking place a day later in Red Deer.

Netminder Kenny Quinn earned his fourth consecutive win as the Cochrane Generals improved to 7W-0L with a 7-3 road win over the Stettler Lightning on Oct. 31.

The Generals also beat the Mountainview Colts 9-3 in Cochrane on Oct. 30. Mike Matlo had a hat trick, while Nick Borody had two and while Labelle, McSween, Adshead and Tyson Soloski each had singles. Garrett Fraser earned the between the pipes

The Generals will visit Three Hills to play the Thrashers on Nov. 5, before returning home to host the Medicine Hat Cubs Nov. 6 at the SLS Family Sports Centre. Game time is 7:30 p.m.

Airdrie and Cochrane’s first meeting of the season will take place on Nov. 21 on the Generals’ home turf.