The Springbank Phoenix football team maintained its positive form Oct. 12, with a 28-6 victory over the Chestermere Lakers at Shouldice Park in Calgary.
Oct 23, 2018 12:01 AM By: Scott Strasser 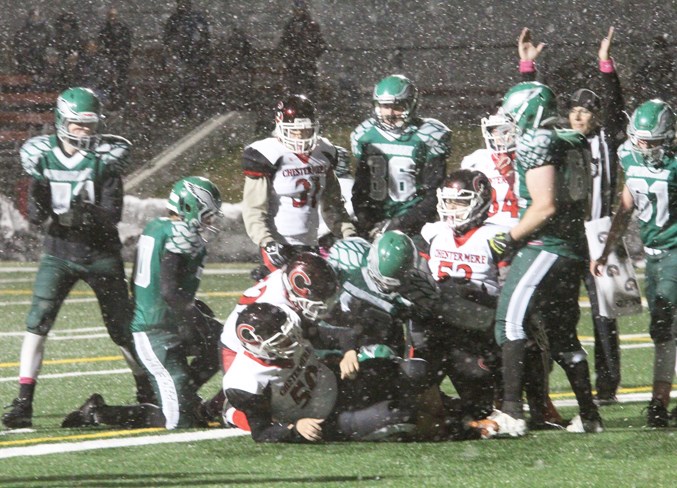 Springbank quarterback Cooper Manes muscles his way into the end zone for a TD against Chestermere, bringing the score to 21-0.

The Springbank Phoenix football team maintained its positive form Oct. 12, with a 28-6 victory over the Chestermere Lakers at Shouldice Park in Calgary. The win – the Phoenix’s fifth in a row – capped off the squad’s impressive regular 2018 season with a 5-1 record in the Rocky View Sports Association (RVSA). “Everybody played as a unit, everyone did their job collectively and nobody lost their composure,” said Springbank slot back Brendan Frolek, who put the team’s first points on the board with a diving catch in the end zone in the first quarter. “Everything went well, tonight,” The Phoenix’s other touchdowns came from quarterbacks Danny Skelton and Cooper Manes, who muscled their way into the end zone on first-and-goals, and Nathan Schlosser, who had an open route to the end zone after catching a short throw from Skelton late in the third quarter. While the offence played well, it was once again Springbank’s defence that shined. With some of the biggest linemen in the RVSA, the Phoenix’s defencemen picked up plenty of sacks on Chestermere’s pivot and forced the Lakers to punt on third down on several drives. During its last five games, the Springbank defence only conceded 15 points and picked up two shut-outs. “[Our defence is] doing what they need to do – they’re covering well, tackling well and getting those picks they need to get,” Frolek said. According to Chestermere’s head coach, Scott Ledieu, the Lakers’ situation coming into the match was not ideal, as the team had a depleted lineup. “We were pretty thin – we have a few injuries, and we tried to move some bodies around,” Ledieu said. “We had some more bodies go down today, so that made it tougher, as well.” One notable absence for the Lakers was senior receiver Dakota Konschuh, who had injured his shoulder in Chestermere’s previous match – a 40-22 loss to the W.H. Croxford Cavaliers, Oct 4. The Grade-12 player was essential to Chestermere’s offensive strategy all season. “I thought we battled pretty hard, [considering] the adversity,” Ledieu said. “We didn’t do ourselves any favours in the first half, but we played pretty hard in the second half.” The loss to Springbank concluded a disappointing 2018 regular season for the Lakers. Chestermere finished the regular season sixth in the RVSA with a 1-5 record, the team’s only win coming via forfeit by the last-placed Bow Valley Bobcats. “We kind of had a down year, but I thought the guys competed pretty hard all season, which was encouraging to see,” Ledieu said. “We’ll have to move forward with that and just continue to try and get better.” According to Ledieu, the team’s main struggle this season was playing as a complete unit. “We had some frustrating games,” he said. “We had games where we would get our offence going, and then we’d get our defence going, but we couldn’t get them going at the same time.” With the regular season done and dusted, the Lakers will take to the field for two consolation matches in the RVSA B playoffs, against the Bobcats and the Cavaliers. Springbank, meanwhile, took on the third-place George McDougall Mustangs in the squad’s first post-season match, Oct. 19 (after press time). The Phoenix and the Mustangs previously played what turned out to be the closest match, results-wise, of the 2018 RVSA season. That match ended 10-9 in favour of Springbank, Oct. 4.