A trio of Airdrie Irish players were named to the Alberta Football League (AFL) first and second all-star teams Aug. 18, along with three other players receiving honourable mention nods.
Aug 24, 2017 12:00 AM By: Airdrie City View 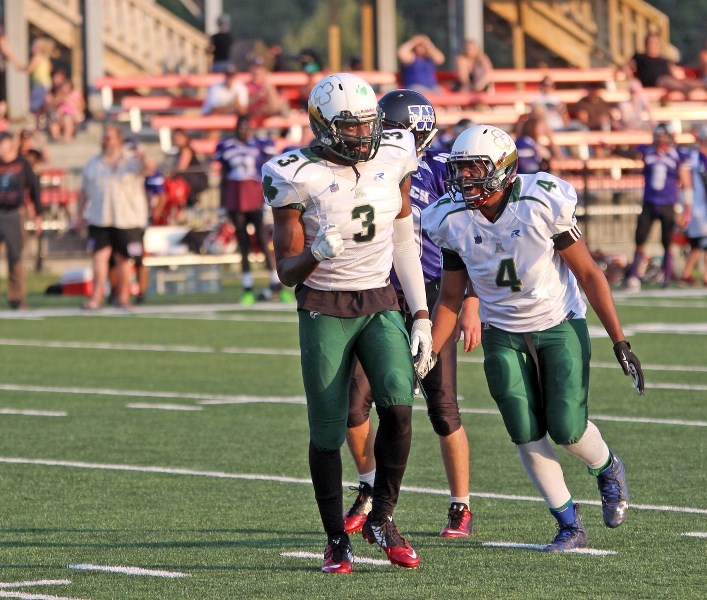 In his second season with the Airdrie Irish, linebacker Anton Bellot (left) had an impressive follow up to his rookie campaign culminating in his selection to the Alberta Football League’s Second All-Star team.

A trio of Airdrie Irish players were named to the Alberta Football League (AFL) first and second all-star teams Aug. 18, along with three other players receiving honourable mention nods.

“This is probably the most we have ever had (named),” Irish president Matt Squires said. “It’s a really good way to end the season and having some of our guys recognized. It’s tough to get an all-star nod, so it’s good to see that.”

Among the players named to the defensive first all-star team was third year defensive lineman Tyler Langlais, who helped lead the Irish to its best season statistically and was one of the stingiest defences to play against throughout the 2017 regular season.

“(Langlais) being named was outstanding as a first team all-star and highest vote–getter, too,” Squires said. “It’s a league vote, so every team does its selections for first and second team all-stars and we can’t vote for our own players. It’s a reception from the other team and who is the hardest players to play against.”

Linebacker Anton Bellot and offensive lineman Josh Comeau were also named to the All AFL second teams. Comeau came out of retirement prior to the 2017 campaign and bolstered the Irish’s offensive line, helping the offence put together its most consistent season in the team’s three-year history.

Bellot joined the Irish during the 2016 season and followed up an impressive first year with an even more outstanding sophomore campaign, where he finished amongst the top of every defensive statistical category including tackles, sacks, forced fumbles, fumble recoveries and interceptions.

The Irish also had three players receive honourable mentions for this past season. Among those players were first-year running back Braxton Hyland, who finished the season third in rushing yards with 437 yards on 84 carries, adding four touchdowns to his resume.

Alongside Comeau, Brent Scherschel was a force on the offensive line, protecting starting quarterback Andrew Stannix and providing key blocking for the team’s running game to earn an honourable mention.

“Our running game was by far the best I have ever seen for this team,” Squires said. “Having those guys there really helped us.”

Defensive leader, middle linebacker Gunnar Godhe rounded out the honourable mentions for the Irish following another impressive campaign in his eighth season in the AFL.