Jinaye Shomachuk’s family might need to start looking at investing in a bigger trophy cabinet – the Airdrie Aces athlete came home from Idaho with yet another gold medal around her neck, after winning the women’s weight throw competition at the 2019
Feb 21, 2019 12:01 AM By: Scott Strasser 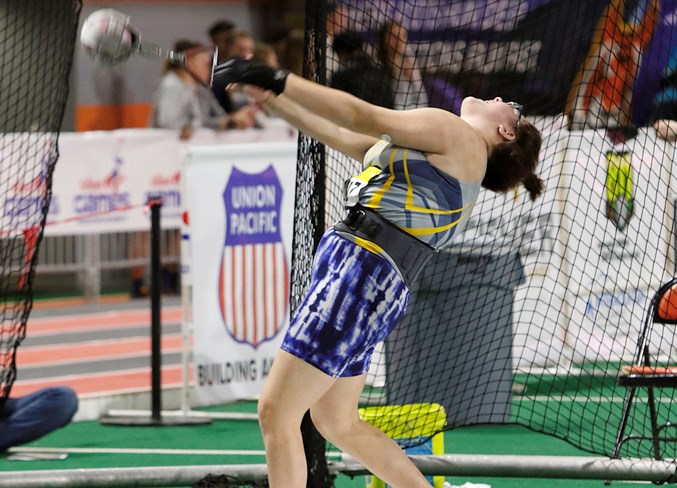 Airdrie Aces throws athlete Jinaye Shomachuk earned yet another gold medal, this time competing in the women&#8217;s weight throw competition at the 2019 Simplot Games in Idaho. The annual track and field competition is the premier indoor meet in North America for high-school aged athletes.

Jinaye Shomachuk’s family might need to start looking at investing in a bigger trophy cabinet – the Airdrie Aces athlete came home from Idaho with yet another gold medal around her neck, after winning the women’s weight throw competition at the 2019 Simplot Games, held Feb. 14 to 16 at Idaho State University. Competing against some of the best high-school track-and-field athletes from North America, Australia and New Zealand, Shomachuk won the women’s weight throw competition with a distance of 52.8 feet. Her throw earned the Aces’ first-ever gold medal at the Simplot Games and the Airdrie club’s third-ever podium finish. “I didn’t actually comprehend it at first,” said the Grade-10 Bert Church High School student. “Going into the competition, I was a bit nervous, but after my first throw, it was like everything else was gone – I felt confident I could get first.” The Simplot Games is held in Idaho each February, and is the premier indoor-track-and-field meet of the year for high-school-aged athletes. This year, more than 2,200 athletes competed. The prestigious meet marked the first time Shomachuk competed – and travelled – internationally. She said it was also the first time she competed with a 20-pound weight, instead of the 16-pound weight she’s used to. “It’s a little harder than the 16 pound, but at the same time, it’s somewhat easier, too, because it’s so much heavier that it forces you to get down more,” she said. Aces president Jodie Matsuba-Szucs said it was amazing to see Shomachuk’s standout season continue. Shomachuk, 15, is currently ranked second in Canada for the U18 women’s weight throw, and has won or medalled at every meet she’s competed in since last summer. “We all knew she was going to get on the podium,” Matsuba-Szucs said. “We even said she could win. She had the potential, because she’s been throwing so well.” Considering the number and calibre of competitions Shomachuk has won in the last year – many against athletes a year or two older – she said it’s starting to dawn on her she has the potential to go far in athletics. “My coach has been trying to start drilling it into my head that I’m becoming a more high-calibre athlete and I need to definitely push myself to go as far as I can,” Shomachuk said. On the track, 16-year-old middle distance runner Aiden Good ran the 800-metre (m) at the Simplot Games and finished 10th with a time of 2:00.09. While Good has broken the two-minute barrier in the 800-m multiple times at outdoor venues, Matsuba-Szucs noted this was a personal best for him on the tighter, 200-m indoor track. Good could have placed higher, Matsuba-Szucs added, but he was boxed in while coming off the first 100 m of his final race. “When you get stuck behind someone and there’s people next to you… and you can’t pull out to pass, and they’re going slower than you’d like, you’re in trouble,” she said. “Unfortunately, you can’t get that time back.” The Aces sent a contingent of 11 athletes to the Simplot Games. In the sprinting competitions, Airdrie was represented by Jasmine Szucs, Taya Court, Ayden Winter, Sarah Cole and Rudy Buchanan. Other Aces who competed in Idaho included two-mile runner Willem Grant and miler Lilie Szucs, as well as 400-m runner Owen Wong and throws athlete Parker Allen. Another Airdronian who competed at the Simplot Games was 2003-born sprinter Sara Zinck, a former Aces athlete who now competes for the University of Calgary Athletics Club. She finished the 200-m with a time of 27.33 seconds.