A pair of high schools in Airdrie may have brought new life to the rugby community with some positive results during the Rocky View Sports Associations rugby sevens championships May 12.
May 18, 2017 12:00 AM By: Airdrie City View 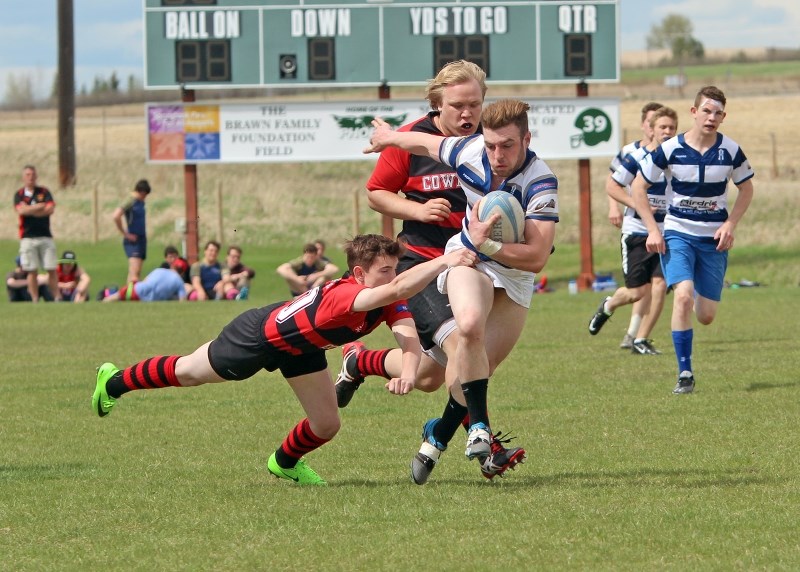 Logan Boomer breaks a pair of tackles during the Bert Church Chargers round robin win over the Chestermere Cowboys in the Rocky View Sports Association Rugby Sevens Championship May 12.

A pair of high schools in Airdrie may have brought new life to the rugby community with some positive results during the Rocky View Sports Associations rugby sevens championships May 12.

Despite coming into the league tournament with little-to-no experience in the sport, the Bert Church Chargers senior boys and W.H. Croxford Cavaliers junior girls teams walked away with second place finishes against rival schools.

“Both the guys and girls teams have probably been exposed to rugby for about two weeks and this was their first-ever game type of situations. It was incredible,” Chargers co-coach Mitch Dorgan said. “They progressed, picked up the game quickly and on (May 12) it all culminated to a positive day with positive outcomes. A lot of people found their love of rugby.”

The Chargers team opened the tournament with a tough loss to the Bow Valley Bobcats but bounced back in a big way against the host Springbank Phoenix in its second game of the round robin.

Dorgan said the win over the Phoenix was a turning point for the Chargers in the tournament and proved to be important on its run to second place.

“There was a huge shift in the demeanor of the players after that first win,” Dorgan said. “I think a lot of the players came in just wanting to try rugby, looking to experience it. Then the mindset switched from, ‘let’s play rugby’ to, ‘let’s win some games.’”

Bert Church kept the momentum rolling into its final round robin game against the Chestermere Cowboys where it used its speed to its advantage and jumped on early mistakes by the Cowboys to win its second game of the round robin, finishing 2-1 and taking the second seed heading into the playoff portion of the tournament.

The Chargers played in a rematch with the third-seeded Cowboys in the semi-finals in what was a much closer contest than the round robin game was between the two teams.

Dorgan said his team might have went into the semi-final a little over confident after stringing together a pair of wins in the round robin.

“The attitude and demeanor was very positive after beating Chestermere and Springbank and then finding out we got to play Chestermere again,” Dorgan said. “I think a lot of guys were overly-optimistic about that (semi-final) game.”

The battle-tested Chargers made it to the final but faced off against the rested Bobcats, which got a bye into the finals as the top seed. The 3-0 Bobcats took the game to the depleted Chargers, which was losing players to fatigue early and often in the final, but Dorgan added that was expected for a team with no experience.

Although the team lost, there were a lot of positives for the Chargers rugby program heading forward.

Bert Church also had a junior girls team that lost in the quarter-finals.

The Cavaliers went 1-2 in the round robin and knocked off Springbank in the semi-finals of the tournament before losing to the Chestermere team in the finals.

“A lot of our girls had never played in a school and none of them other than one had played (rugby) before. We had to do a lot of work on and off the pitch because everything was brand new to them,” said Cavalier coach Michelle Thompson.

In addition to establishing a rugby program at Bert Church, Dorgan feels the success of the team may have helped the Airdrie Highlanders rugby program by introducing the sport to a new batch of potential players for its late-teens age group programs, which it is hoping to start this season.

Dorgan, along with Jill Young, are the youth development officers for the Highlanders and are currently working on building a youth rugby program for ages 16, 17 and 18 and for both men’s and women’s rugby.

By reaching out to the local high school, Dorgan said he believes the startup program could excel and build into a feed program for adult teams in years to come.

If anyone is interested in signing up and taking part in rugby this summer, registration and contact information can be found on the team’s website at airdriehighlanders.com.