The Rockyview Silvertips’ players were glad to be back at home, but the result wasn’t what the team hoped for.
0
Jun 15, 2010 12:00 AM By: Airdrie Today Staff 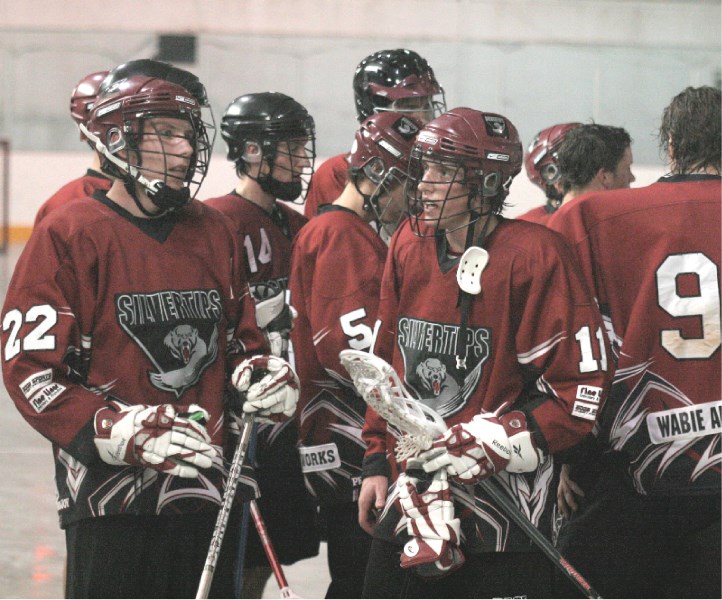 The Rockyview Silvertips’ players were glad to be back at home, but the result wasn’t what the team hoped for.

After losing two games in Saskatoon last weekend, the ‘Tips fell again to the Edmonton Warriors 7-5 in Rocky Mountain Lacrosse League play at the Pete Knight Arena in Crossfield, June 12.

The team, 1W-8L on the season, is now in the Junior B Tier 1 South Division’s basement.

“We played really well, but we’re lacking heart on the offensive side,” said assistant coach Terry Keogh. “That was the key today, as we got down by a few early. In the second period, we hit three crossbars, I think, so it could have been a 6-4 game instead of a 6-1 game coming out of the second period.”

Ryan Taylor scored the ‘Tips’ lone goal of the first 40 minutes with seven minutes left in the first period. The Warriors, however, were already up 3-0 on three early goals. They then scored three more times to take the 6-1 second intermission lead.

The ‘Tips’ Matt Metka scored twice in the third period, while Delbert Donnelly and Dustin Taylor added singles late in the game. Keogh was happy with what he saw out of his team in the final period, but says they still have some work to do.

“We showed some character in mounting the third period comeback,” he said. “The improvement that we’ve seen defensively has been great. But we’re still making the errors that show the lack of experience and the little mistakes.”

The Warriors meanwhile improved its record to 4W-2L-3T, good for second in the North Division.

“They move the ball well and they’ve got a lot of guys who are experienced in the league,” Keogh said. “But if you take away the first 10-12 minutes, it could have been a much different result. The mental preparation is a big thing. When the opening whistle goes, we need to be ready to play.”

The Silvertips are young and inexperienced, but Keogh said he expects the improvement to continue in the team’s remaining games.

“We’ve got eight or nine guys that have been here for a few years and the rest of the guys are newer and younger. It’s about the speed, so if we can get our guys to transition to where we’re running all the time, we’ll be better,” he said.

“And if we can get over that hurdle of spotting teams some goals at the start, we’ll maybe start putting some wins on the board.”

The ‘Tips’ next home games are June 17 at 8 p.m. against the Calgary Chill at the Spraylakes Centre in Cochrane and June 19 against the Red Deer Rampage at the Pete Knight Arena in Crossfield. Game time is 3 p.m.