Hundreds of minor football players from across the Calgary region came together for a large-scale exhibition tournament at Shouldice Park, Aug. 14.
0
Aug 17, 2010 12:00 AM By: Airdrie Today Staff 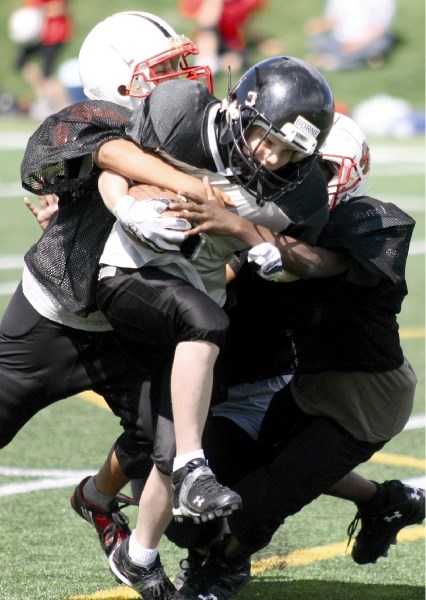 Hundreds of minor football players from across the Calgary region came together for a large-scale exhibition tournament at Shouldice Park, Aug. 14.

The Cochrane Lions and Airdrie Storm were two of the teams competing in the one-day jamboree and both head coaches said it was a good early season learning process for their respective clubs.

“For a lot of these guys it’s their first time playing against another team. Gauging yourself at practice is one thing, but going against kids you don’t know is a big change.”

“The kids are all coming back from holidays right now, so we’re just going to work on timing,” said Lions Peewee head coach Jeff Avery.

“We’ll also only bring in about 10 plays, so we don’t show the league our whole playbook.”

Both coaches admitted a lot of their plays were still in the development stage and need some work before the season begins in two weeks.

But they also said that working out the finer points against new competition was an essential part of their season preparations.

“We don’t keep score and it’s about hitting somebody besides your friends and getting experience against teams you haven’t seen before,” Avery said.

“Some of these kids are huge, so it gives you a different competition level as well. We’ll do some passing plays in order for the quarterbacks to read different defences.

“It’s really important, because every defence runs different. But some of the kids had to play on both sides of the ball today, so I’m quite happy with the effort level out there.”

“We’re a little disorganized with some of our plays, so we’ll have plenty of stuff to work on at practice this week,” Rohl said.

“We’re solid on defence, it’s just a matter of getting the offence rolling. Thankfully we have an exhibition like this to work on some plays against other teams. This gives you a lot of extra experience.

“For the kids, it helps them get over the pre-game jitters, and for the coaches, it helps us figure out what we need to work on. Now we know what we have to work on in the next two weeks for when the season starts.”