When the George McDougall Mustangs and W.H. Croxford Cavaliers open the high-school football season on Sept. 4, the stakes will be a bit higher than their previous encounters – at least when it comes to local bragging rights.
Aug 11, 2021 10:00 AM By: Scott Strasser
Previous Next
The winner of the newly branded West Side Championship will take home this WWE-style championship belt.Submitted/For Airdrie City View
Expand
Listen to this article
00:04:37

When the George McDougall Mustangs and W.H. Croxford Cavaliers open the high-school football season on Sept. 4, the stakes will be a bit higher than their previous encounters – at least when it comes to local bragging rights.

The season-opening fixture in the Rocky View Sports Association (RVSA) will not only mark the two schools' first game against each other in nearly two years, but also the first time they will contest for the newly-branded West Side Championship – a new rivalry game featuring Airdrie’s two high school football programs on the west side of the city.

According to Mustangs head coach Chris Glass, the thought behind branding the 'best in the west' game was to incorporate W.H. Croxford into the existing rivalry between Airdrie’s high school football teams. The Cavaliers joined the RVSA football league in 2016.

“We’ve had the Airdrie Bowl for a long time and it’s something that is near and dear to everyone’s heart, but we’ve had nothing for our west-side rivalry, so we invented the West Side Championship,” Glass said.

In addition to local pride, the winning team in the annual game will take home a WWE-style championship belt, adorned with the two schools’ logos and the City of Airdrie insignia. Similar to the Airdrie Bowl trophy, the belt will be awarded to the winning team each year. 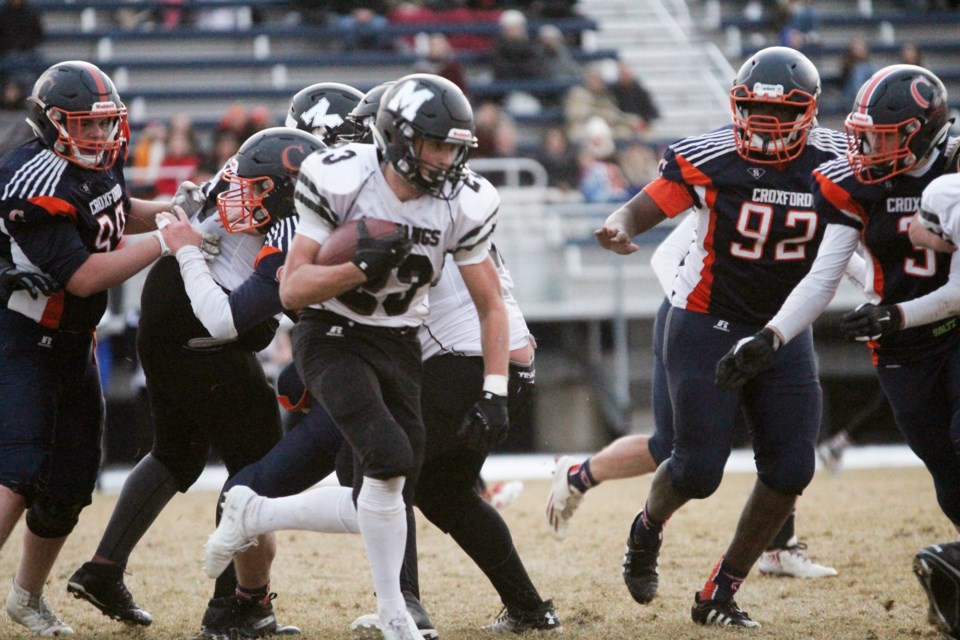 In their 2019 game featuring the two teams, the Mustangs ousted the Cavaliers 28-23. File photo/Airdrie City View

“It’s kind of ridiculous, but all in good fun,” Glass said.

While the Mustangs and Bert Church Chargers have contested for local high school football supremacy through the annual Airdrie Bowl match-up for nearly 20 years, the recent arrival of the Cavaliers meant the city suddenly had a third high school football program in the mix.

“From a Croxford perspective, it’s not really an 'Airdrie' Bowl, anymore, now that we’re in the picture,” said Josiah Donahue, the Cavaliers new head coach. “We have this kind of west-side rivalry with George Mac and I’m sure we’ll try to plan something with Bert Church as well.”

Glass said the Mustangs and Cavaliers players – many of whom play together for the Airdrie Raiders midget football team during the spring football season – have latched onto the west-side rivalry, and are already hyped for the Sept. 4 game.

“They love it,” he said. “There’s a good Instagram battle going on between our two accounts, and I know Coach Josiah is pretty excited to be the inaugural champions. But we’re just as excited to be the first ones too, so it will be a good battle.”

In terms of the two teams’ prior games against each other, the Mustangs have dominated the overall series since 2016, but the two head coaches noted their most recent games saw some competitive contests. 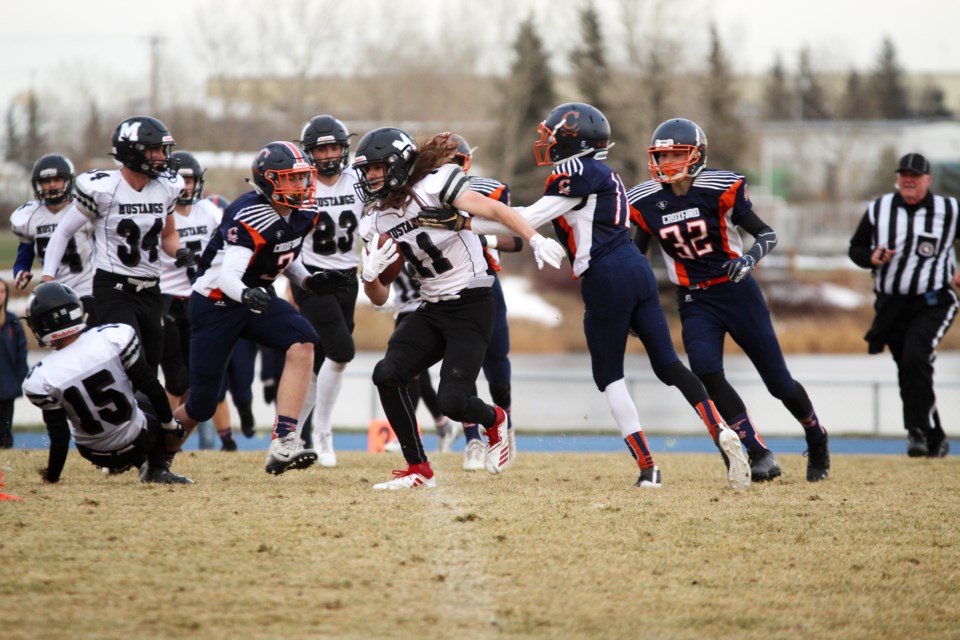 While the Mustangs have dominated the overall series between the two teams, the 2019 and 2018 games were close battles. File photo/Airdrie City View

“I think all three Airdrie teams this year are going to be really competitive with each other, so between the West Side Championship and the Airdrie Bowl, you’re really going to see who rules Airdrie and who comes out on top,” Glass said.

The last time the two teams took each other on was Nov. 1, 2019, when the Mustangs edged the Cavaliers 28-23 in a tightly fought game that saw the lead shift back and forth until the dying minutes.

George Mac and Croxford also had a close match-up on the opening day of the season in 2018, when the Mustangs won 30-16.

“I would say every game [against George Mac] has been quite tight,” Donahue said. “Going back as long as I’ve been around with Croxford, we’ve had some great battles. Chris and I are great friends, but we also want to beat each other on the scoreboard.”

Pre-season for the upcoming football season will begin in mid-August. With their first game less than a month away, Donahue said he is looking forward to the Cavaliers' upcoming season – his first in the head coaching role.

“We’re just excited. We’re ready to get out there and see where the season takes us,” he said. “We’ll be a pretty young team, but I think everyone is in that scenario. We’re looking to see who can grow and get over the hump, after COVID.”

While high school football teams were able to train and hold inter-squad scrimmages in the fall of 2020, Glass noted the players are eager to finally return to competitive action this year.

“It’s going to be so good to get back to playing football,” he said. “Returning after COVID and the long layoff we’ve had, to play a meaningful football game with the M on our jersey is going to be great.”