Airdrie’s Jake Neighbours is one step closer to realizing his dream of playing professional hockey, after suiting up for a Team Canada roster for the first time earlier this month.
Nov 22, 2018 12:01 AM By: Scott Strasser 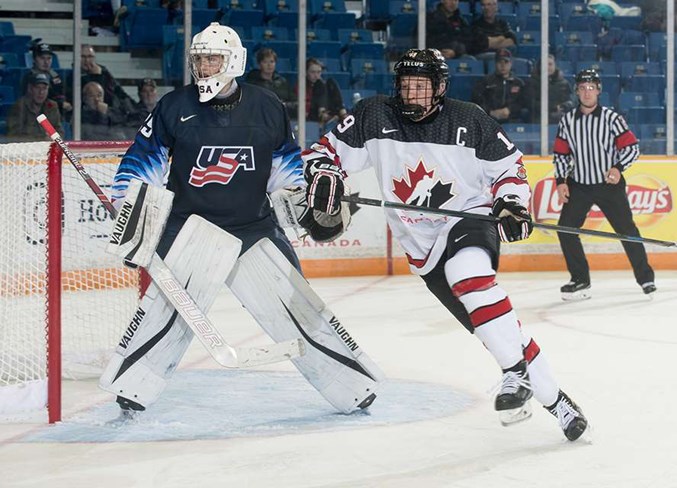 Airdrie&#8217;s Jake Neighbours enjoyed his first experience wearing a Team Canada jersey, as captain of the Canada White team at the World U17 Hockey Challenge Cup, Nov. 4 to 9 in New Brunswick.

Airdrie’s Jake Neighbours is one step closer to realizing his dream of playing professional hockey, after suiting up for a Team Canada roster for the first time earlier this month.  Neighbours was among the 66 players chosen to represent Canada at the World U17 Hockey Challenge cup, held Nov. 4 to 9 in New Brunswick. The 16-year-old said it was a special moment when he initially put on the Canada sweater. “It’s something you dream about as a kid, watching World Juniors and things like that,” he said. “To put on that jersey for the first time and take that first step in the Program of Excellence – it was something special." And Neighbours did not just crack the Canadian roster – he also had a “C” stitched onto his sweater. He was the captain for Canada White, one of Hockey Canada’s three teams at the tournament. Though his team crashed out of the competition in the second round, following an overtime loss to eventual silver medalists Finland, Neighbours said playing at the World U17 Hockey Challenge was a positive experience.  “It wasn’t the result we wanted, but it was an honour to put on that jersey,” he said. “To represent my country and be the captain was obviously an upgrade, so it was pretty special.” Canada White got off to a solid start in the tournament, defeating Canada Black 5-4 in overtime. It followed up with a 5-2 win over the United States and a 5-1 win against the Czech Republic. Unfortunately, Neighbours’ team then lost 4-3 to Finland Nov. 8, meaning Canada White was out of contention for a medal. The squad concluded the tournament with a 5-3 defeat to Canada Black in the fifth-place consolation game.  His team didn’t make the podium, but Neighbours enjoyed a positive output on a personal level by registering six points (three goals, three assists) throughout the games. The Airdronian managed at least a goal or assist in every game, including a two-goal effort in the loss to Finland. “I played with some good linemates and we had a lot of success on the power play,” he said. “When you’re playing with such high-skilled guys, it’s easy to put up good numbers.” Now back in Alberta, Neighbours will shift his focus to resuming his first complete season in the Western Hockey League (WHL), where he plies his trade for the Edmonton Oil Kings.  Despite being one of the team’s rookies, Neighbours has logged plenty of playing time and points for the Oil Kings already this year. The left-handed forward has managed five goals and nine assists throughout his 19 games, helping the Oil Kings turn around a disappointing 2017-18 campaign. For his efforts, he was named the league’s rookie of the month for September and October.  He said adapting to the speed of play and the physicality of the WHL has been a tough, but rewarding, challenge.  “It’s something I wasn’t used to, for sure,” he said. “You grow up playing against guys who are only a year older than you, or a year younger.  “Being the youngest you can be in this league and playing against guys who are 17, 18, 19 and 20 is tough, and it takes some adapting.”  The Edmonton team is enjoying a positive 2018-19 season so far, with a 13-8-1-2 record. After 24 games, the Oil Kings is second in the WHL’s Central Division and fourth in the Eastern Conference. “Our team has had a lot of success,” Neighbours said. “I’m getting the chance to play some pretty skilled guys every once in a while, and getting lots of opportunities.  “It’s all I could ask for in my 16-year-old season.”