The last time the Mustangs won the RVSA title was in 2014, when they beat the Cobras for the division banner. The Cobras went on a six-year banner winning streak following that defeat.

The eight-year wait is over.

In a rematch between the two teams that competed in last year’s title-deciding game, the Mustangs upset the Cobras 38-20 on Friday, with an emphatic performance to hand Cochrane their first defeat of 2022, and just their second loss against RVSA opposition since 2014.

“We were ready – we’ve played this team so many times,” said Mustangs head coach Chris Glass, a few minutes after getting a Gatorade tub of water dumped on his head by the jubilant Mustangs players. “We know them, and they know us. There weren’t any surprises. But what it comes down to is executing that game plan.”

While the Cobras overcame the Mustangs 35-21 earlier this fall during the regular season – and beat them in overtime in a thrilling 2021 RVSA final – Glass said George McDougall executed its game plan to a tee in the RVSA final. 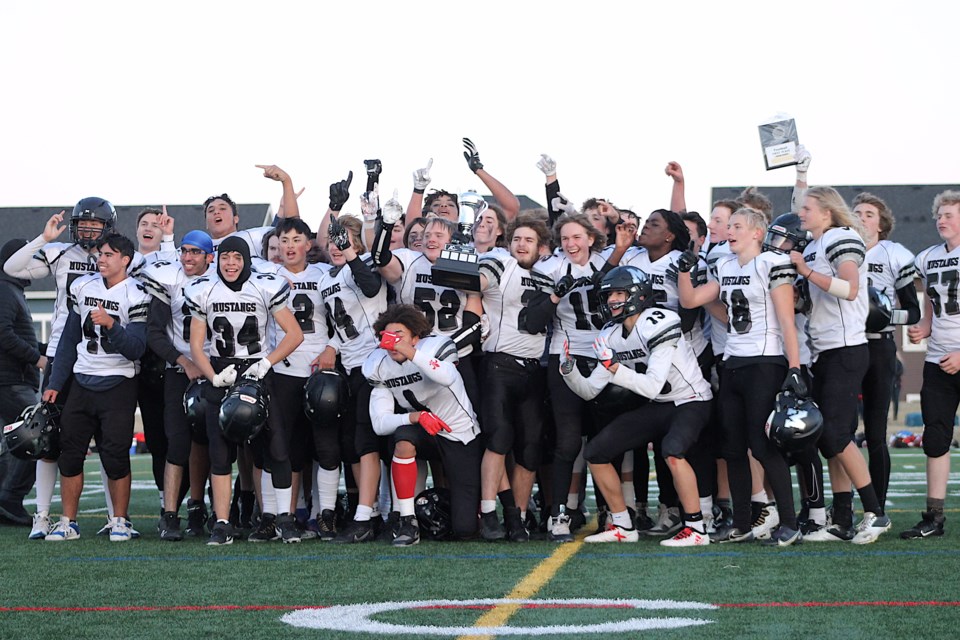 He noted both the offence and defence started strong and the Mustangs’ key players performed at the top of their game.

“We’re a physical, strong team and when we’re on, we think we can beat anybody,” he said. “Cochrane is a great team and put up a great fight, but we were ready to play.

“Our best players, again, were our best players. I could bring up Paul Condon and Dawson Jensen all day long, but [those two] again were amazing. Dawson had two picks and was in on almost every tackle. It was a really good football game from him.”

Condon, the Mustangs’ star running back, put in another stellar performance on offence. The Grade 12 player scored three touchdowns for George McDougall, including two in the fourth quarter to maintain the Mustangs’ lead after the Cobras had scored their two touchdowns.

“When the game was on the line, Paul was our best player again,” Glass said. “[But] everyone played their part. Even our kicking game was strong today. When you’re having that kind of momentum, it’s something that carries you through.” 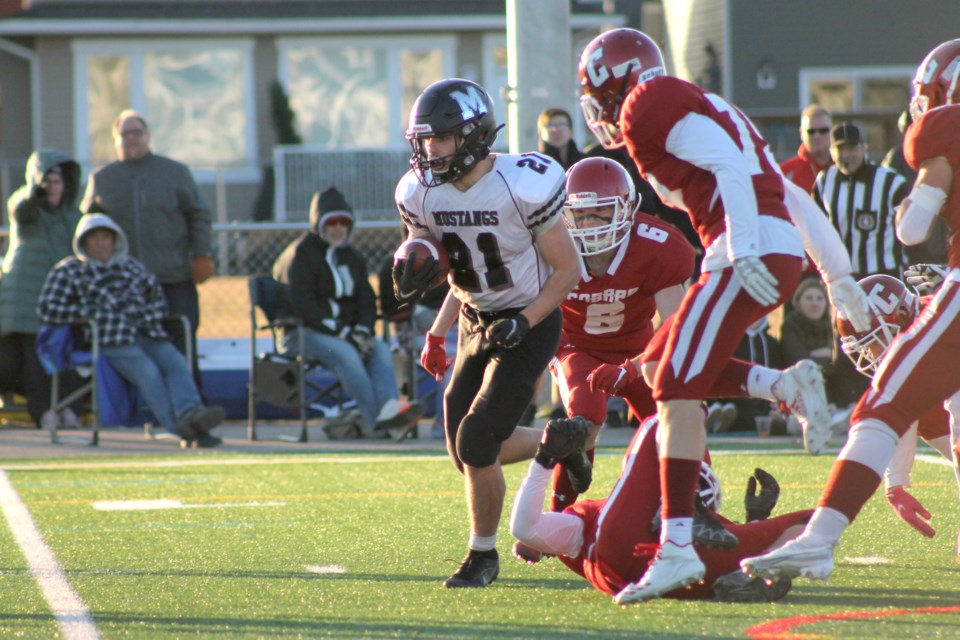 It was a low-scoring start to the game, but the Mustangs were able to break the deadlock with a touchdown and carry the 7-0 lead into half time.

George McDougall extended the advantage in the third quarter, forcing a safety, and then tacking on two more touchdowns to lead 23-0 as the two teams headed into the fourth and final quarter.

On defence, the Mustangs kept the Cobras away from the George McDougall end zone, repeatedly forcing Cochrane to concede incomplete passes, fumbles, and turnovers on downs.

“In the past, we’ve started slow against this team,” Glass explained. “This time we didn’t. We came out ready to play, we forced turnovers on defence. When you’re getting turnovers against a team as fundamentally sound as the Cobras, it’s bound to turn into good things.” 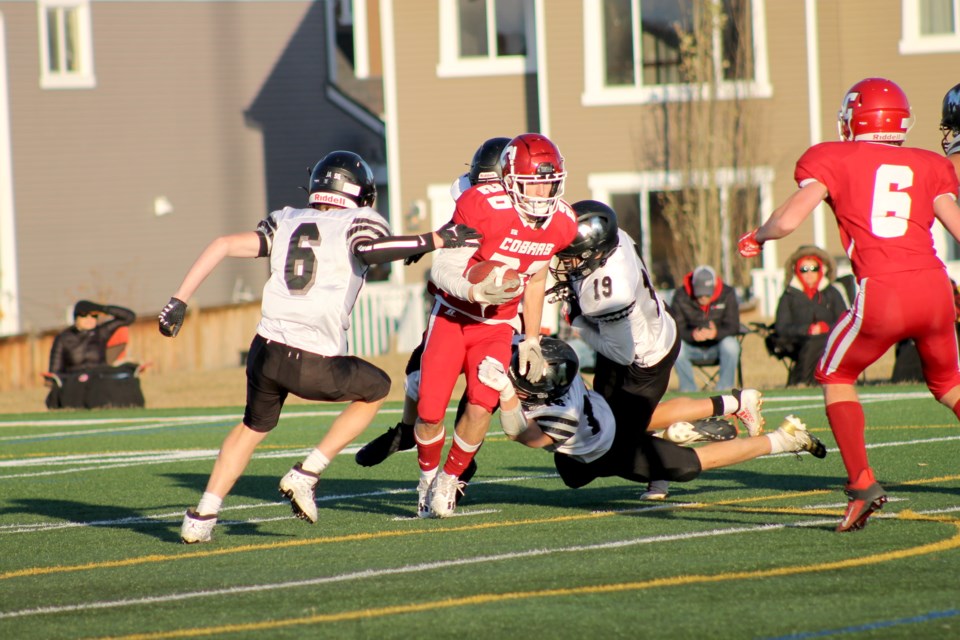 With a three-touchdown lead as the clock ticked down, the Mustangs’ fans probably thought their team had the game wrapped up with four minutes left to play.

But the Cobras refused to call it quits on their home turf, quickly making a game of it with a pair of touchdowns on their two ensuing possessions. That brought the score to 23-12 with less than two minutes on the clock.

In the end, however, the Cobras’ comeback effort came up short. After the Mustangs forced another interception, Condon was able to seal the victory with two lung-bursting runs into Cochrane’s end zone to regain a healthy lead for the Mustangs.

“It’s a testament to the team we played,” Glass said of the Cobras’ attempt of forcing a late comeback in the final minutes. “Cochrane does great things and they’re a great football team. It’s an honour to keep playing them in games like this, but it’s nice to be on the end of a win this time.”

While the Cobras scored a third touchdown on the very last play of the game, the Mustangs’ celebrations on the sidelines had already begun by that point. 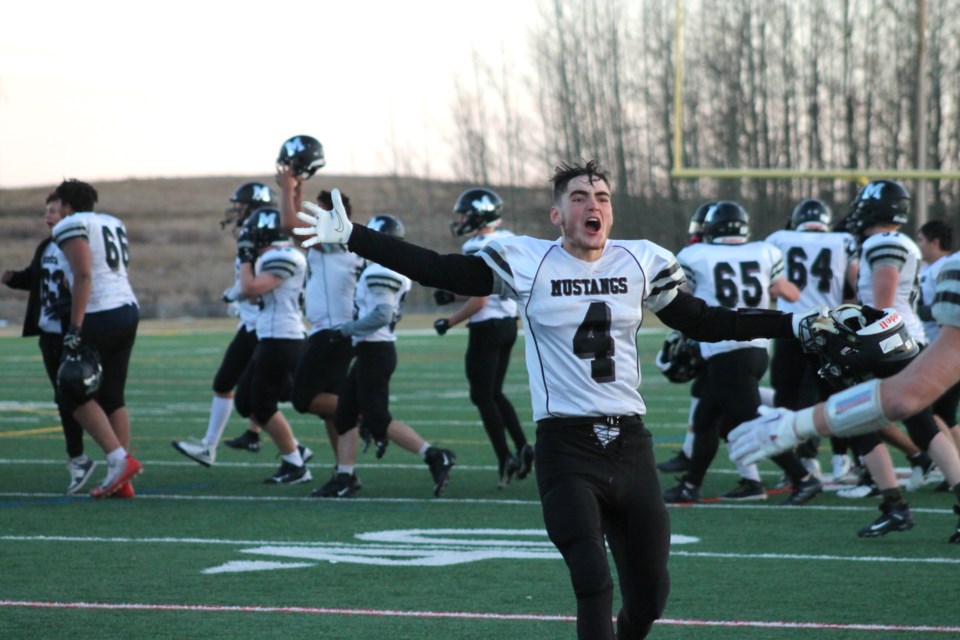 And it was a celebration eight years in the waiting – the last time the Mustangs won the RVSA title was in 2014, when they beat the Cobras for the division banner. The Cobras went on a six-year banner-winning streak following that defeat.

“It feels so good because last year, we came so close,” said Zachariah Hardy, a Grade 12 defensive end for the Mustangs. “We went into overtime and lost to them [in 2021] so taking it back feels really good.”

Though the RVSA football season is done for the year, neither the Cobras’ nor the Mustangs’ 2022 campaigns are officially wrapped up yet, as both teams will play in a Zones qualifier next week to vie for spots in the Alberta Schools Athletic Association (ASAA) provincials.

For George McDougall, it will be a rematch of last year's provincial qualifier, when the Knights put up a dominant performance against a battered and bruised Mustangs team. HTA ended George McDougall’s hopes of challenging for a provincial berth with a 39-0 shutout.

But this year, Glass said his players are going into next week's game healthy. He added the win against Cochrane will provide a big confidence boost when they take on the Okotoks-based team, who are currently ranked first in the province among Tier II teams and have a 7-1 record this season. 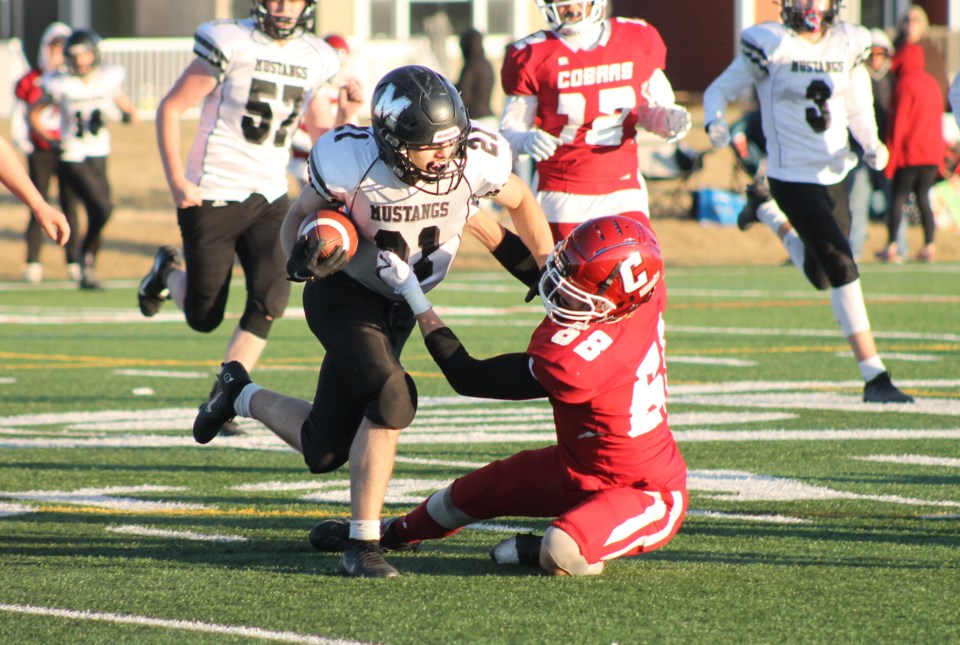