After 48 minutes of regulation time and two overtime sessions settled nothing, the Springbank Phoenix used a trick out of the Canadian football playbook to claim the Rocky View Sports Association’s Tier 2 gold medal.
Nov 5, 2010 12:00 AM By: Airdrie Today Staff 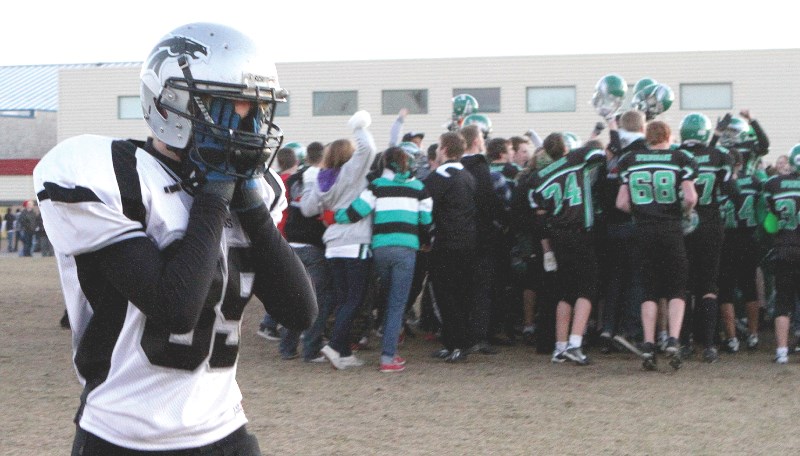 After 48 minutes of regulation time and two overtime sessions settled nothing, the Springbank Phoenix used a trick out of the Canadian football playbook to claim the Rocky View Sports Association’s Tier 2 gold medal.

A rouge from seven yards out became the deciding factor as the Phoenix defeated the George McDougall Mustangs 15-14 in a triple overtime nail-biter, Oct. 29 in Springbank.

With the win, Springbank takes over the No. 10 Tier 2 provincial ranking and will host Foothills High of Okotoks in a regional qualifier on Nov. 6.

“We were down on the (Mustang) seven and I knew we could kick it out of the endzone to win,” said Phoenix head coach Tony Lucas, moments after receiving a chilly ice water bath from his players.

“We had the momentum after a big play, so that was an easy decision at that point. I’m really proud of the guys and think they really earned the win today. We’ve come a long way this year and have gotten better week-by-week. George McDougall came a long way too this season, and they gave us all we could handle.”

“It was just an awesome, awesome game and that’s what you want to see for a gold medal game,” said Mustangs’ head coach Brent Legault. “In 18 years of coaching football, I’ve never gone to triple overtime. We had opportunities, they had opportunities and there were lots of mistakes. But overall, it was a 14-14 game right down until the bitter end.”

Springbank took a 7-0 lead into the half, after quarterback Joel Stagg found receiver Kevin Natenstadt for a 30-yard touchdown late in the first quarter.

The Mustangs responded four minutes into the second half, when Mike Callaway intercepted Stagg and returned the ball 65 yards for the touchdown. George Mac missed the extra point, but took the lead when Colton Williams jumped on a Phoenix fumble in the endzone.

Alex Smith ran the ball in for the two-point conversion to give the Mustangs a 14-7 lead.

“Our defence was really stepping up and having a lot of fun with it,” Legault said.

Springbank tied the game three minutes into the fourth quarter, when Stagg found receiver Jordan Perrault-McLean for a 37-yard touchdown. The Phoenix could have gone up with 5:44 remaining, but Lucas opted to go for it on third down and two from the Mustangs’ 10-yard line, rather than attempt a 17-yard field goal.

Springbank didn’t convert and George Mac took over on downs.

“We could have made it easier on ourselves and maybe won it in regulation if we would have tried the field goal, and that was my decision, so I’m glad it worked out,” Lucas said.

George Mac’s next drive began on Springbank’s 45 with 1:27 remaining. They worked the ball down to the 18 and decided to try a rouge – only to be blocked by the Phoenix with 23 seconds left to set up overtime.

The first two overtime sessions, where teams begin with the ball on the offensive 35-yard line, yielded no scoring. In the third extra frame, after George Mac couldn’t convert a first down, the Phoenix made a change by bringing Van Kruger into the offence.

Stagg promptly found him for a 26-yard pass to set up the winning rouge.

“He plays mostly defensive line, but every now and then we put him on offence in the jumbo set – and he came through when we needed him,” Lucas said of Kruger.

“We had a chance to get the single point with 23 seconds left (in regulation) and we just couldn’t make the punch on it,” Legault said.

“I told our guys they played the best possible game they could have played and that we had a fantastic year. We thanked our 11 seniors who are graduating.

“We have a big group of Grade 10s and 11s coming back next year, so we’re excited about that. As much as it does sting right now, we always have to think about the future and where this program is going to go. And we’ve come a long way already.”

Springbank will host a Tier 2 Regional Qualifier against Foothills High of Okotoks on Nov. 6.