The season didn't end the way the St. Martin de Porres senior boys’ volleyball team had hoped for at the 2018 Alberta Schools Athletic Association (ASAA) 3A provincial championships, held Nov. 22 to 24 in Rocky Mountain House.
Nov 29, 2018 12:01 AM By: Scott Strasser 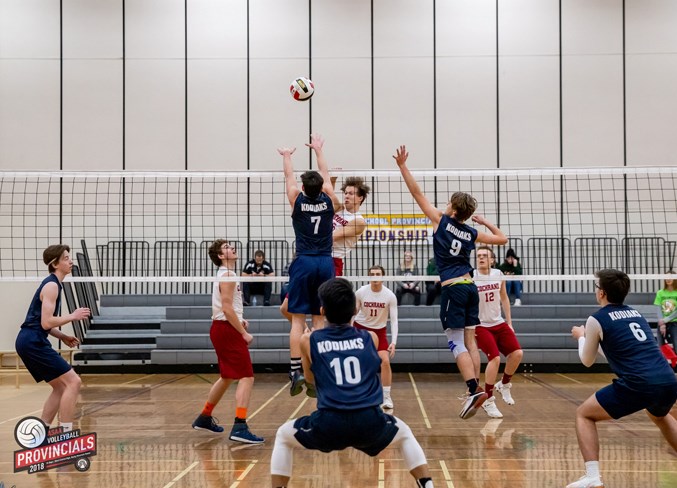 The St. Martin de Porres senior boys’ volleyball team competed at the 2018 ASAA 3A championships Nov. 22 to 24 in Rocky Mountain House. The Kodiaks didn’t play its best, however, winning just one of its five matches.

The season didn't end the way the St. Martin de Porres senior boys’ volleyball team had hoped for at the 2018 Alberta Schools Athletic Association (ASAA) 3A provincial championships, held Nov. 22 to 24 in Rocky Mountain House. Playing in the ‘A’ Pool, the Kodiaks won just one of its five matches at the tournament, overcoming the H.J. Cody Lakers in three sets (19-26, 26-24, 15-12) on opening day. Head coach Edmund Crame said the Kodiaks struggled with consistency throughout the weekend. “We had some great moments, but at this point of the season, you can’t just have moments – you have to put it all together,” he said. “In volleyball, the momentum shifts so much. You have to stay consistent on offence, and then be able to steal a few points on defence with a couple good digs or blocks.” The Kodiaks’ defeats came against the Cardston Cougars (22-15, 17-25), the Cochrane Cobras (17-25, 20-25), the Edmonton Christian Lions (23-25, 20-25) and the Morinville Wolves (26-28, 14-25). While St. Martin de Porres was swept by all four of those opponents, Crame added his team did manage to challenge the tougher teams in the A Pool in at least one of the sets. The Kodiaks fell by just two points in the opening set against both the Wolves – which finished with the bronze medal – and the Lions, which finished fourth. “As the tournament went on, we started playing better – but as the tournament went on, our opponents also got better and better,” Crame said. "We were very close to stealing the first sets in both of those games.” Crame added he did not feel St. Martin de Porres was the only team to struggle with consistency throughout the weekend. “We were finding ways to play with the teams and we definitely felt we were deserving of competing there,” he said. “It was just a matter of putting it together.” Despite the mediocre showing at provincials, Crame was still pleased with the Kodiaks’ performance this season. The team finished third in regular-season play in Division 2 of the Calgary Senior High School Athletic Association, and finished with the silver medal after making it to the championship match. “A really improved group of guys here, and they made it to the city championship game, which isn’t always the case,” he said. “It was nice to make it that far.”