The chance or the St. Martin de Porres senior boys’ volleyball team to bring home the Division 2 championship was snuffed out Nov. 17 f by the Crescent Heights Cowboys.
Nov 22, 2018 12:01 AM By: Scott Strasser 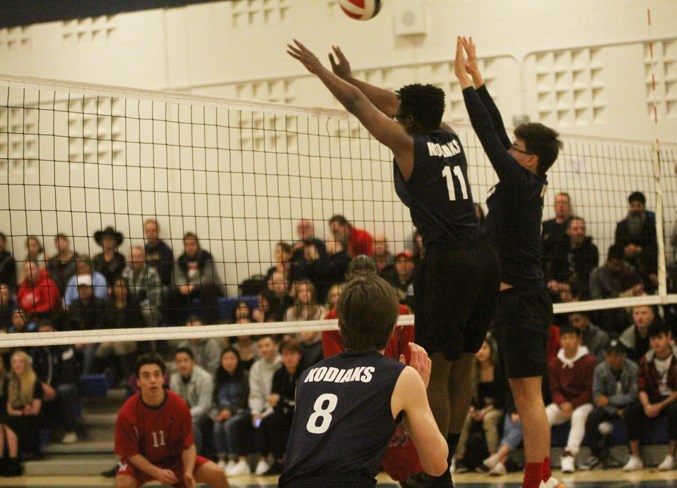 Eddie Dolne and Zachariah McLeod go up for a block against the Crescent Heights Cowboys. The Kodiaks lost in the championship match in four sets.

The chance or the St. Martin de Porres senior boys’ volleyball team to bring home the Division 2 championship was snuffed out Nov. 17 f by the Crescent Heights Cowboys.  In a high-energy, gold-medal match played in front of a rowdy crowd at Ernest Manning High School in Calgary, the Cowboys overcame the Airdrie team in four sets to claim the title (25-16, 23-25, 25-20, 25-19). “At the end of the day, I think our emotions got the better of us,” said the Kodiaks’ head coach, Edmund Crame. “Crescent Heights wasn’t error-free either, but they kept the pressure on and stayed engaged the whole game – it was well-deserved [win], on their part.” St. Martin de Porres started flat in the first set, allowing the Cowboys to coast to a one-sided 25-19 victory.  The Airdronians looked more like themselves in the second frame, however, coming out strong to take an early lead and not letting it slip.  The third and fourth sets were closer than the first, but the Calgarians came out on top, spurred on by the loud cheering of the 200-plus fans in attendance at the Calgary Senior High School Athletic Association (CSHSAA) championship game. The defeat was hard for the Kodiaks to swallow, according to Crame.  “We really felt it stung because we knew we could have [won],” he said. “We knew that if we were strategic and focused on doing all the right things, we’d have a bit more of a chance to take home the banner.” A key advantage the Cowboys enjoyed was the height of its players at the net – particularly 6’9” middle Chris Ruta, whose hitting and blocking proved valuable weapons for Crescent Heights. “We tried to focus on staying strategic and looking at our match-ups, and how we can best battle against big, tall guys,” Crame said.  “We didn’t stick to our game plan and we were maybe a little less disciplined than we’d have liked.” In its first year competing in Div. 2, the Kodiaks qualified for the playoffs by posting a 7-2 record in the regular season. Despite starting the 2018 campaign with two defeats, the team rallied back with a seven-match winning streak to finish third, behind Crescent Heights and the Bishop Carroll Cardinals. The highlight of St. Martin de Porres’ campaign came Nov. 15, in the playoff semi-final match against Bishop Carroll. While the Cardinals had swept the Kodiaks during the regular season, the Airdrie team turned the tables on the Calgary team to post a sweep of its own. Crame credited the three-set victory with his players’ ability to stay “100 per cent engaged” throughout the match. “There are going to be times when you miss a serve or get blocked,” he said. “Last game, regardless of those errors, we were able to use positive self-talk and we managed to rally behind the team in every point and find a way to stay dominant.” Though he said he was disappointed with the loss to the Cowboys, captain Sean Hillson added the squad has improved as a unit throughout the course of the 2018 season. “We’re a completely different team than [we were] at the start of the year,” said the Grade-12 outside hitter, who has played with the Kodiaks for three seasons.  “Last year, we were in Div. 3 and we won Div. 3, so we moved up a division and now we’re playing in Div. 2. It’s pretty impressive we could go a whole division up and still get second place.” The Kodiaks will have one more weekend together on the court this year, when the team travels to Rocky Mountain House to contest for the Alberta Schools Athletic Association’s AAA provincial championships. The competition kicks off Nov. 22. “It’s nice to know this isn’t the end of the season, and we have some more volleyball to prove ourselves as a good team,” Hillson said.