The emphatic home victory marked the Irish’s first win since Aug. 11, 2018, when they beat the Lloydminster Vandals 21-14. The Irish went winless in 2019 and the AFL season was cancelled in 2020 due to the COVID-19 pandemic.

“It’s been a long time coming,” said Irish running back Connor Lutz after Saturday's game. “In 2019, it was a pretty tough year. Then there was a year off, and then we didn’t start this year the way we wanted to, so it felt good to get a 'W.'”

The 11-touchdown performance did not only mark the Irish’s first win of the season, but also secured Airdrie a spot in the 2021 AFL playoffs. With just five teams competing in the league this year, the top four qualify for the post-season.

The Irish came into the home battle against Calgary with a 0-2 record, following defeats against the Central Alberta Buccaneers and Edmonton Elite. 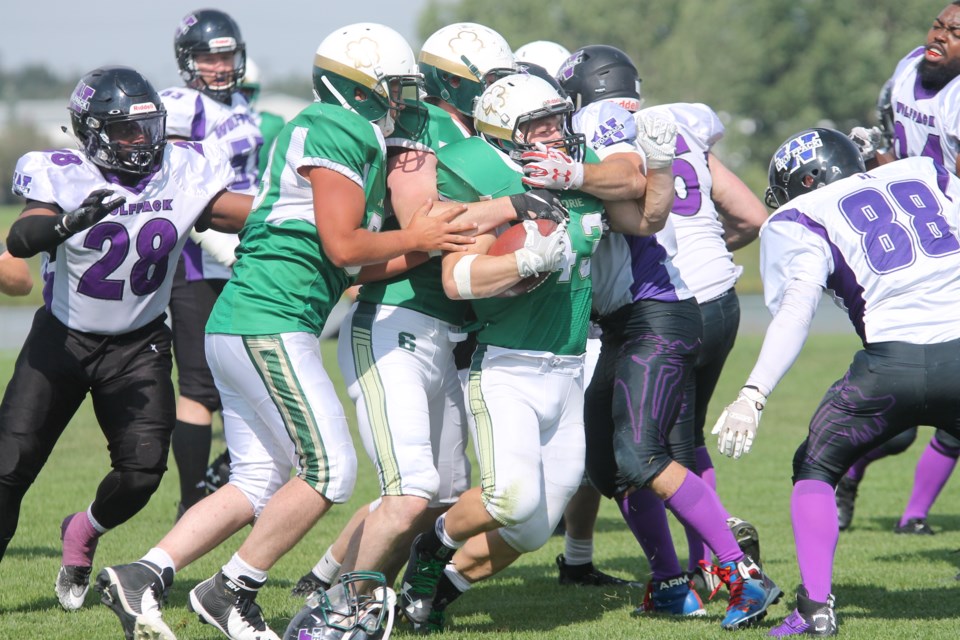 Running back Connor Lutz was a key performer for the Irish, scoring two touchdowns and registering more than 20 carries. Photo by Scott Strasser/Airdrie City View

Lutz, who contributed two of the Irish’s touchdowns in addition to 20-plus carries against the Wolfpack, claimed the winless run was not playing on the Airdrie players’ minds.

“We weren’t looking back at how past seasons went,” he said. “We had a really good off-season and a really good recruiting class, and we felt strongly about the team we had put together this year. It was a bit disappointing to start 0-2, but to get a W feels good and hopefully we can build some momentum off of this one.”

The start of the game was close, as the Irish and Wolfpack ended the first quarter tied at 7-7. The Irish started to take control in the second quarter, putting up three touchdowns and conceding just one as the players started to find their rhythm. The home team ended the first half with a 28-14 lead. 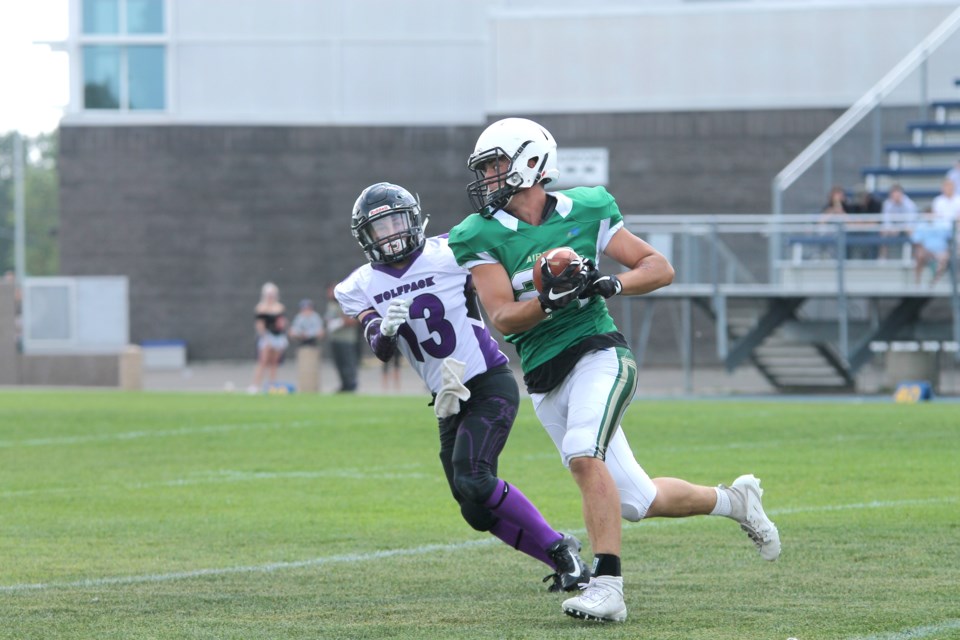 A strong offensive performance coupled with a capable defensive showing earned the Irish the emphatic victory over their AFL rivals, the Calgary Wolfpack. Photo by Scott Strasser/Airdrie City View

The touchdowns kept coming in the second half, as Airdrie’s offence continued to find holes in the Wolfpack’s defence.

“Obviously, you don’t win with one facet of the game,” he said. “Special teams played a pretty good game and the defence gave us the chance to get on the field and score some points. Early in the game, they had quite a few turnovers, a couple interceptions and a fumble recovery. That makes a huge difference when it comes to momentum and field position.

“Absolutely, we wouldn’t have put up 77 points without the efforts of the defence.” 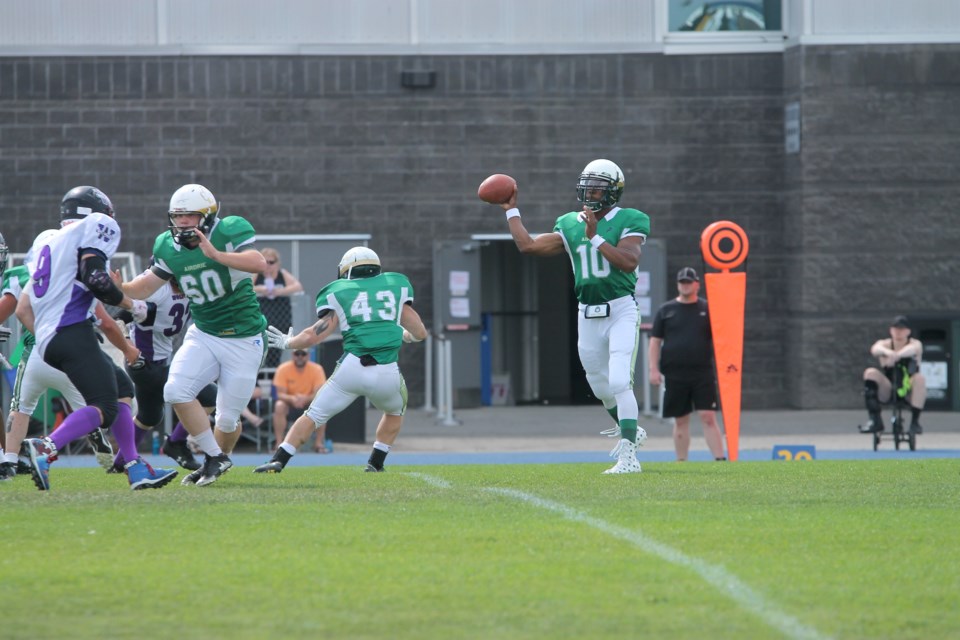 QB Josh Williams releases a pass in the first half. Photo by Scott Strasser/Airdrie City View

Head coach Anton Bellot said the team’s tempo and execution were far better than during the Irish’s first two games of 2021.

“I think we did really good with our tempo on offence, and on defence, we were more aggressive than our other two games – we wanted to take the attack to them,” he said. “That’s definitely got us to the score we did today.”

The Irish have just one more regular-season game this summer before prepping for the AFL playoffs later this month. On Aug. 14, the squad will travel north to take on the Cold Lake Fighter Jets, who also have a 1-2 record this season. That contest will decide who finishes in third place.

Bellot and Lutz said the Irish will need to be at their best to overcome a strong Cold Lake defence.

“They have a defensive make-up and DNA, and they’re very tough, aggressive and physical,” Bellot said. “It will come down to who executes better. It should be a very good game at a good venue. [Lutz] and I know some of those guys personally, having played with and against them during our college careers, so it should be a really good game.”