In their final match of the 2018 high-school football season, the George McDougall Mustangs and the Bert Church Chargers battled it out Oct. 26 to determine the bronze-medal winner of the Rocky View Sports Association (RVSA).
Nov 1, 2018 12:01 AM By: Scott Strasser 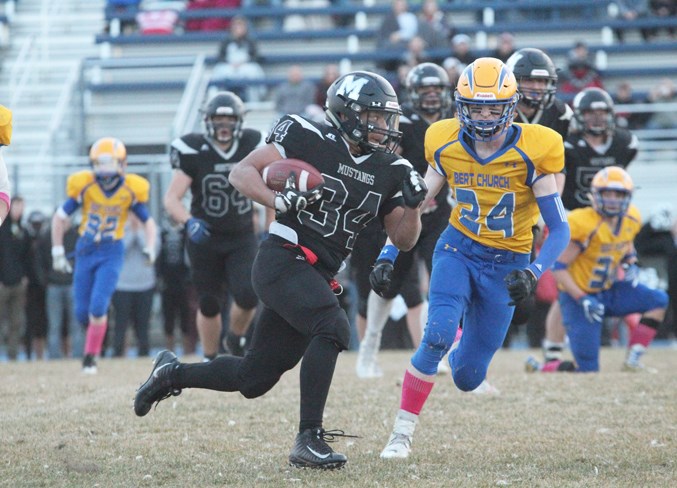 Sophomore running back Michael Schaan carries the rock towards a first down for George McDougall, Oct. 26. The Mustangs overcame the Bert Church Chargers 33-26 for the RVSA bronze medal.

In their final match of the 2018 high-school football season, the George McDougall Mustangs and the Bert Church Chargers battled it out Oct. 26 to determine the bronze-medal winner of the Rocky View Sports Association (RVSA).  Following a back-and-forth 48 minutes in which the teams traded the lead and momentum, the Mustangs left the Ed Eggerer Athletic Park field victors in the 33-26 decision.  Bert Church jumped out to a 19-0 lead in the first quarter, with a pair of touchdowns from junior wide receiver Blaise Newberry and a push into the end zone from senior quarterback AJ Parker.  But George McDougall overcame its sloppy start to post five consecutive touchdowns in the second, third and fourth quarters. Zachary Thiessen was the hero for the Mustangs, picking up a trio of end-zone catches.  “We definitely started out pretty slow,” said Mustangs senior middle linebacker Josh Seaman. “We weren’t on our game, but we came back in the second half.  “We just came back and knew we were going to win the game.” The Mustangs’ two other touchdowns came from sophomore running back Michael Schaan, who blasted his way into Bert Church’s end zone on a 60-yard romp to start the second half, and quarterback Reid Jensen, who doubled the Mustangs’ seven-point lead on a running play in the game’s final minute. The Chargers kept things interesting when it notched another major on its next drive. With barely 30 seconds left, sophomore slot back Landon Reed caught a 20-yard pass in the end zone that brought Bert Church within six points. But the Chargers could not force a fumble on the Mustangs’ next possession, which meant George McDougall was able to run out the clock.  Newberry said Bert Church held its own against the Mustangs, which had beaten the Chargers 33-13 in the teams’ previous encounter this season.  “We had a lot of injuries and that brought us down [but] we definitely picked ourselves up after the third quarter,” he said.   Following the final whistle, Mustangs players celebrated their second consecutive RVSA bronze medal victory, while the Chargers reflected on the team’s most successful season in recent memory. Bert Church ended the 2018 season with a 3-5 record, but its .500 record during the regular season helped the team qualify for the RVSA “A” playoffs. “I’m proud of our team, for the season,” Newberry said. “Obviously, we did better than the last two, three or four [years]. That’s an incredible improvement and we’re only getting better. Next year, George Mac better watch out.” The end of the match also meant the end of high school football for the two teams’ many senior players, who remained on the field, mingling with friends and family after the game to savour the experience.  “It’s rough,” said Parker. “I’ve been with this team for four years now and I’ve seen its ups and downs. I was with it when we went 0-6, and then 1-5 and now we were 3-3 at the end of the regular season. “It kinda hurts to say goodbye to it, but I just know [the program] will go up and up, from here.”