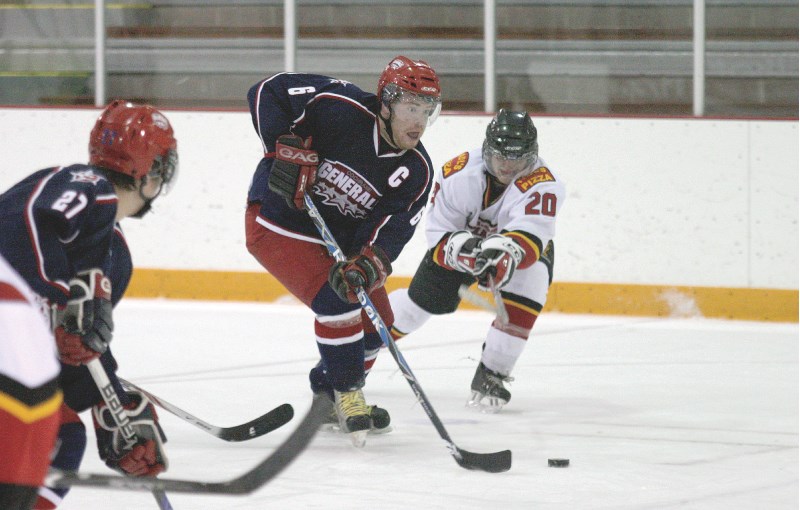 Cochrane Generals captain Danny McSween drives past the Airdrie Thunder’s Mark Rollo, on home ice, Nov. 21. The Generals came from behind to beat Airdrie 7-6, improving their record to 14W-0L.

Cochrane extended its winning streak to 14 games by beating the Airdrie Thunder 7-6 in a wildly entertaining affair at the SLS Family Sports Centre on Nov. 21, after cruising to an 8-4 road win over the Banff Academy Bears, Nov. 19, and a blowout 20-0 win over the Rimbey Rock on Nov. 20.

Jonny Pictin’s game-winning power play goal, his second of the game, with 5:59 left in the third period was the difference over the Thunder, which has now lost three straight and four of the last five.

“Forget about 13 or 14 in a row, we needed to have a test to see where we stand against the good teams,” said Generals’ head coach Dana Boothby. “People start thinking about streaks and individual things, so we needed to play a good hockey team. I’m really proud of the guys with the way they hung in there. We started slow but the guys responded well. It was a great win.”

Mike Matlo’s three goals led the Generals, as Cochrane out-shot the Thunder 38-30. But Airdrie opened up a 5-1 first-period lead and chased Generals’ starting goalie Garrett Fraser from the net, after Travis Wallan scored twice and Alex Diduch, Shaw Pickett and Mark Rollo all tallied early on.

“We had them on their heels,” said Thunder head coach Darryl Einarson. “We were doing a lot of things right and our guys were ready to play. It was a good, solid road period and it’s just too bad we couldn’t finish it off.”

“We played a couple of slower games on Friday and Saturday and Airdrie’s tempo was a lot higher,” Boothby said. “It took us a little bit of time to react to the higher speed. But we put some pressure on, we have lots of firepower, and it all worked out.”

Generals’ forward Darren Schmautz’s power play goal made it 5-2, 7:35 into the second, when he completed a passing play between he, Maddison Smiley and Pictin, after the Thunder’s Alex Hustad took a tripping penalty.

Matlo’s top corner shot at the 12:10 mark, followed by a tap-in for his second, 80 seconds later, and his one-timer off a Tyson Soloski pass, with 4:19 left in the middle frame, completed the comeback for Cochrane.

Cache Doolaege put Airdrie back on top 1:41 into the third, with a wrist shot from the point, before Jason Labelle stickhandled through three Thunder players and put a backhand shot top shelf past Jeff Gardner.

Landon Bergh had a chance to put the Generals ahead on a controversial penalty shot with 7:52 remaining, minutes after Airdrie was denied a similar opportunity, but Gardner made the save. Pictin scored his power-play goal two minutes later, after his initial shot hit the post and the rebound bounced in off Thunder defenceman Ryan Russell.

“Very tough bounce on the goal,” Einarson said. “They came at us pretty hard in the second period, but I thought we composed ourselves and played a pretty good third period. When Cache scored our sixth goal, I really thought we’d shut them down. Penalties cost us and we learned what we’re up against here. They’re a very skilled team and I can’t wait to get playing against them on Friday again. After a loss like that, it’s good to get right back against the same team in our barn.”

“We’ll see if we still have enough character to keep it going and we’ll see who wants it more and go right back at it,” Boothby said. “There’s nothing better than conference battles.”

The two teams will play a rematch, their second of four meetings this season, at Airdrie’s Ron Ebbesen Arena Nov. 26 at 8 p.m.