CALGARY — Defencemen and goaltending top Brad Treliving's list of priorities as the Calgary Flames general manager prepares for a busy business week in the NHL.
Oct 2, 2020 8:45 PM By: Canadian Press 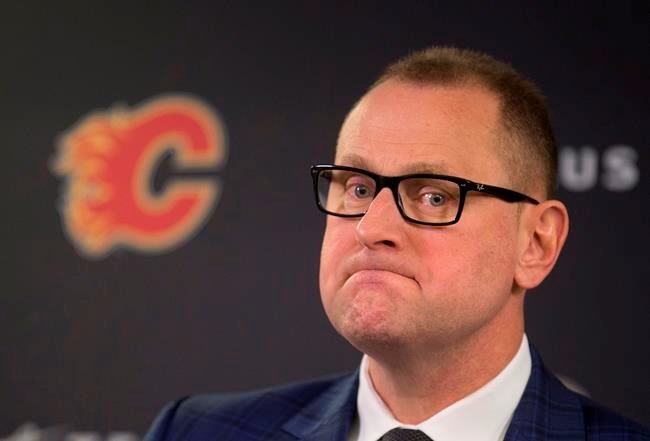 CALGARY — Defencemen and goaltending top Brad Treliving's list of priorities as the Calgary Flames general manager prepares for a busy business week in the NHL.

The entry draft and the start of unrestricted free agency occur in a four-day span starting Tuesday.

Treliving has made draft-day headlines with showy deals during his six seasons as Calgary's GM.

He points out every NHL general manager is prepping for an important work week in unusual conditions imposed by the COVID-19 pandemic, however.

"It's really new frontier here, where you've got a lot of things in play," Treliving said Friday during a conference call.

The flat salary cap at $81.5 million because of the pandemic's economic effect on the NHL, and not knowing if the 2020-21 season will actually start on Dec. 1, has GMs proceeding with caution, according to Treliving.

Next year's expansion draft for the Seattle Kraken is another consideration for moves made next week.

"A lot of it is hesitation on people not knowing what the market is. I think there's a real hesitation right now to take on excess money."

Calgary owns the 19th pick in Tuesday's opening round. Whether the Flames take that selection or trade it, what Treliving does via trades or free agency will be the buzz in Calgary's off-season.

The Flames (36-27-7) were eliminated from the first round of playoffs in a six-game series with the Dallas Stars, who in turn lost the Stanley Cup final in six games to the Tampa Bay Lightning.

"We're a good team and we had an opportunity to put that team on the ropes," Treliving said of the Stars.

"We didn't. You look at the run they had so that shows you how close you are, but you can't can't get lost in that. We need to get better. We weren't good enough to win that series."

Calgary's post-season starter Cam Talbot is headed for unrestricted free agency. David Rittich has a year remaining on his contract.

"If we return the same goaltenders we did a year ago, I don't think that's necessarily a bad thing."

Veteran net names are set to hit the open market Oct. 9, however.

Robin Lehner, Jacob Markstrom, Braden Holtby, Anton Khudobin, Corey Crawford and even Henrik Lundqvist, if the Swede doesn't retire, could be for hire.

"The goaltender market is probably fluid through potential UFAs, potential trade opportunities. It's about as fluid as I can recall it."

"I've touched base with all our UFAs. We haven't closed the door on anyone at this point," Treliving said.

"Those are still opportunities to potentially come back and get a deal with them or we do something different.

"We're gauging the market right now. Our two biggest needs right now when you look at expiring contracts is figuring out our goaltending and defence."

Treliving says he's talked with other teams about the potential of moving up or down from the 19th pick Tuesday to make a deal.

"If nothing changes between now and Tuesday night, we're comfortable in the board that we have right now," he said.

"We're picking 19th. In that spot, we've got a grouping of players there. We're comfortable that we're going to get a good player there. We've just got to make the right selection."

This report by The Canadian Press was first published Oct. 2, 2020.