Edge School’s new prep basketball team is off to a roaring start in its inaugural season in the National Preparatory Association (NPA).
0
Oct 30, 2018 12:01 AM By: Scott Strasser 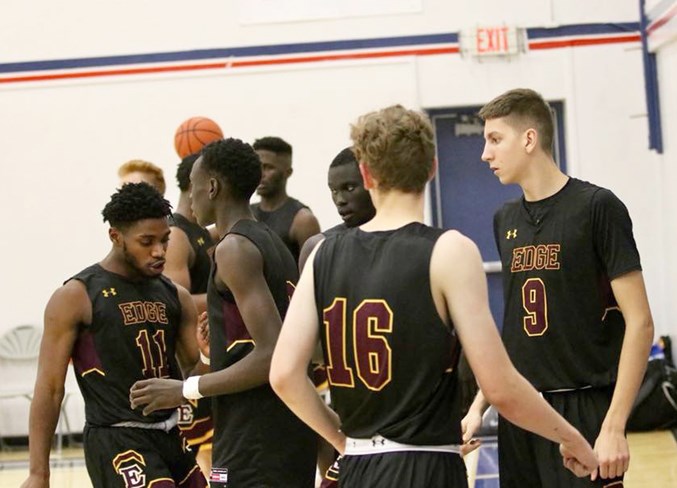 Edge School’s new prep basketball team is off to a roaring start in its inaugural season in the National Preparatory Association (NPA). The Springbank-based private school’s senior basketball team boasts an undefeated record after its first three league games. The team currently sits atop the NPA Western Conference following its opening weekend series of the 2018-19 prep circuit.  In a trip to Winnipeg, Edge defeated the Northstar Prep Institute 101-91 in its first game of the season, Oct. 19. The team followed up the victory by beating the Saskatoon Basketball Academy in two matches the following two days, 95-91 and 98-71. Adam Huffman, head coach, said it’s been amazing to see how much his players have gelled, considering they joined the program just a few months ago. “We were down in Arizona playing [exhibition games] two weeks ago, and some of the NCAA coaches were commenting on how strong our culture looked,” he said.  “When I told them we were a first-year program, they were shocked.” Edge’s inaugural roster is sprinkled with both Canadian and international players, Huffman added, with some players coming from as far away as Iran and the Bahamas. Ten of the team’s 17 players are in Grade 12.  “It’s nice because they practice twice a day, take small classes together and some of the guys live in a team house together,” he said. “These guys are spending hours upon hours together.” Topping the scoring charts for Edge so far have been senior guard Adefolarin “Fofo” Adetogun and junior guard Alan Spoonhunter. Adetogun scored 53 points in the team’s first two games, including a 34-point evening against the Northstar Prep Institute. Spoonhunter also enjoyed a 34-point game, in the first match-up against Saskatoon.  “Those two have definitely led the charge, from a scoring standpoint,” Huffman said. Adetogun previously played under Huffman at Notre Dame Prep – another NPA team, based out of Regina. Huffman said the 6’0” guard with a 6’9” wingspan is already a well-known player among collegiate basketball scouts in Canada and the United States.  “We had a scout down in the States say they haven’t seen a kid lead like this since 1985,” he said. Huffman said he also expects big things from Spoonhunter, who moved to Alberta from Saskatoon this year to join Edge’s basketball program.   “He’s going to take this league by surprise,” he said. “He can really [shoot] the ball.” Edge will look to maintain its unbeaten run Nov. 11, with another NPA fixture against Northstar.  Following that match-up, the team will continue its 2018-19 season at the Canada TopFlight Academy, in Ottawa, from Nov. 29 to Dec. 2. Edge will feature in four games in Canada’s capital against NPA opponents from Nova Scotia, New Brunswick and Ontario. Considering the team’s early success, Huffman said he expects Edge’s next few opponents to come out full-guns blazing.  “I can see we definitely have a target on our back and we’re definitely the team to beat,” he said. “We’ve had five games this year [including exhibitions] that came down to the wire, and we won all five of those. Some teams just know how to win, and that’s what special about this group.” The NPA is a competitive basketball league comprised of prep school teams across Canada. Entering its third year, the league includes 13 prep-school boys’ basketball programs, with games taking place from October to March.