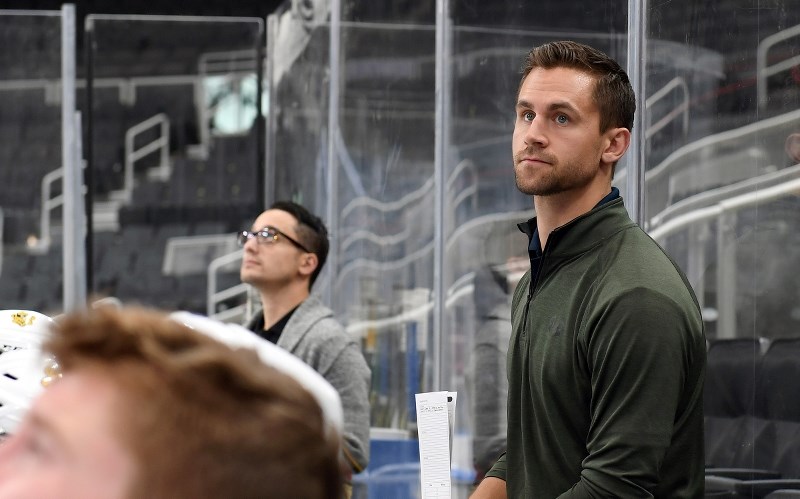 After one season as the CFR Chemical Bisons associate coach, Airdronain Dustin Taylor has been promoted to head coach for the team’s 2018-19 Alberta Midget AAA Hockey League season.

Taylor, who is no stranger to the Bisons organization, takes over as head coach after serving as associate coach for one season and playing with the team during the 2007-08 season, when it was located in Strathmore.

“Having been a part of what we were trying to do last year and 10 years prior, (this) has come full-circle for me,” Taylor said.

“I’m excited to be afforded the opportunity to be head coach of this program.”

Taylor said he was always interested in coaching but never thought he would be able to make it a profession – especially with a team he had played for.

The Airdrie product takes the reins from former head coach Dan Gendur, who is departing the team after one season.

In the team’s first year back in Airdrie after playing in Strathmore since the 1993-94 AMHL season, Gendur coached the Bisons to a 10-21-4 record.

Originally, the Bisons was made up of a drawzone comprised of Airdrie, Okotoks and the surrounding Rocky View County communities.

Prior to the 2017-18 season, the drawzone was split in two, resulting in the Bisons and newly-established Okotoks Bowmark Oilers both needing to rebuild programs and cultures.

Taylor said he is excited to pick up where Gendur left off.

“Dan did a great job re-establishing a culture, because in many regards, despite the long history of the program, essentially, this was a brand-new program,” Taylor said. “It was very much a rebuilding year…and going forward, we can definitely continue to build on that momentum and culture that we set last year.

“Having the first-hand experience of where (the culture) came from and have the knowledge of all the hurdles that had to be jumped over in the past year will be a huge benefit.”

The 27-year-old won’t be alone in his first year as head coach, as he will have a large core of talented young athletes available to play on his team. He said he anticipates between six and 10 returning players, depending on how tryouts go and whether some transition to the junior level.

Taylor said he will rely heavily on the returnees to help the organization progress as a contender in the AMHL.

“A big part of the success we had last year came from having good players that bought into what we were trying to do,” Taylor said. “We surprised a lot of people last year, and that creates a lot of excitement for new players coming in.

“With having a larger returning core group, it will help the transfer of knowledge to the new guys.”

The Bisons boasted one of the youngest rosters in the AMHL last season with five 2002-born players – including team Most Valuable Player Jett Jones – and six 2000-born players.

According to Taylor, age had nothing to do with how the team was composed last season. He said players earned their positions based on performance.

“There is a misconception in how big the jump is coming from bantam into midget,” Taylor said. “This is a strong league, there are a lot of talented, hard-working hockey players in it and the jump is something it takes a while for new players to get used to.”

Taylor has yet to solidify his coaching staff for the upcoming season, but said he has been interviewing candidates. He is also gearing up for the Bisons’ first annual spring camp June 15-17. Details on the spring camp can be found online at bisonshockey.ca