Two Cochrane women are among the 35 players from across the country vying for 22 spots on the Canadian national women’s under-18 hockey team. Katy Josephs and Amy Helfrich are in Toronto for the camp, which runs from Aug.
0
Aug 10, 2010 12:00 AM By: Airdrie Today Staff 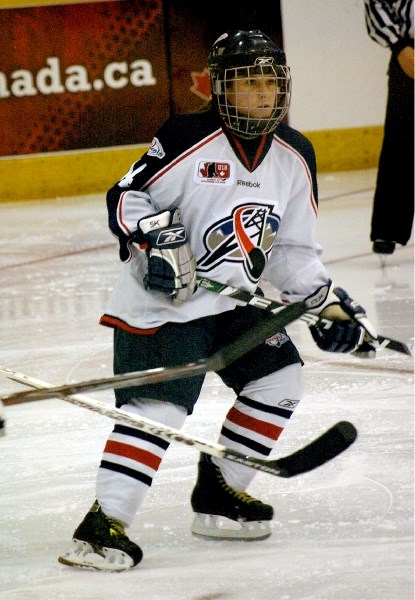 Amy Helfrich is one of two Cochrane hockey players, along with Katy Josephs, who is trying to make the Team Canada U-18 women&#8217;s hockey team in Toronto. Members of the team will be determined on Aug. 15.

Two Cochrane women are among the 35 players from across the country vying for 22 spots on the Canadian national women’s under-18 hockey team.

Katy Josephs and Amy Helfrich are in Toronto for the camp, which runs from Aug. 6-15, looking to make the team that will represent Canada at the 2011 World Championships in Sweden.

They will be on the ice twice a day, in addition to having numerous dry land training exercises, and both said they are very happy for the opportunity to represent their country.

“I’m excited to be part of the camp, but it’s going to be a difficult time trying to make the team,” Josephs said. “I haven’t actually played against most of these girls, so I don’t really know what to expect when it comes to the hockey part.”

“The competition is going to be high and I’m expecting it to be a big challenge for me, but I think I can keep up and compete,” Helfrich said. “My expectation is to make it to the second week and I’m pretty confident about it. It’s a great opportunity and I’m super excited.”

If either or both the girls make the team, they won’t have long to get adjusted, as Team Canada is scheduled to play a three-game exhibition series with Team U.S.A. starting three days after the camp on Aug. 18.

“That would be really cool, but I think it would be difficult to play as a team right off the bat,” Josephs said. “It would be a challenge for us to come together that quickly, but I think it’s possible. Everyone should be in good shape and in the proper mindset to play.”

“It would definitely help build the chemistry between us a lot more,” Helfrich said.

Both girls have been following the Hockey Canada training program, required by all camp participants, although they said it has been tough to do during the summer months.

“It’s been difficult, but it’s part of the commitment,” Josephs said. “I decided at the beginning of summer that I’m going to go for it. I’ve also been working on the mental aspect of getting myself prepared to keep my game up the whole entire camp.”

“I’ve been working hard all summer,” Helfrich said. “It’s a challenging thing because we have to keep track of our food. It’s taken a lot out of my summer, but I don’t mind and I’m excited for the opportunity.”

Josephs and Helfrich, 5’5” and 5’1” respectively, bring different individual strengths to the camp, but both are expecting to be on the final roster.

“I’m a small player, but my speed and determination are my strengths,” Helfrich said.

“I’m not the quickest person out there, but I think I have a really good hockey sense when it comes to reading the play and knowing where to go,” Josephs said.” I also feel that I’ve worked on my shooting and stick handling skills a lot, so I think that will help. The chance to represent Canada would be awesome. It’s a dream for every girl who plays hockey.”