If there was any question which team would win the Rocky View Sports Association (RVSA) football title this season, the Cochrane Cobras put the doubt to bed in the second half of its championship game Oct. 27, against the Springbank Phoenix.
Nov 6, 2018 12:01 AM By: Scott Strasser 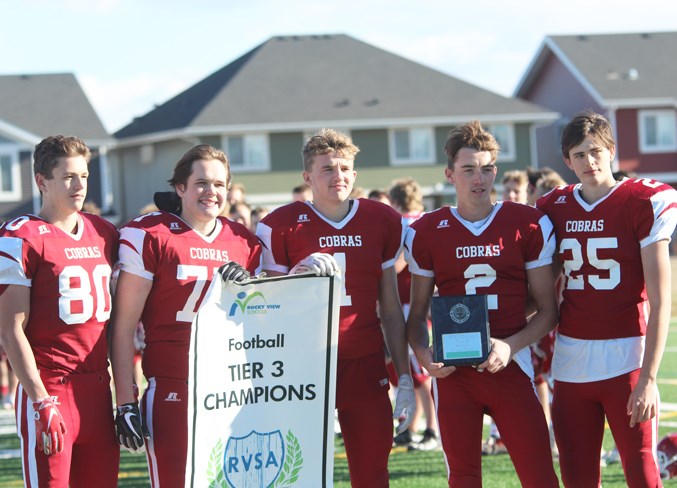 The Cochrane Cobras football team won its fifth straight RVSA championship Oct. 27, with a 35-2 victory over the Springbank Phoenix. The Cobras will now look to defend its Tier 3 provincial title.

If there was any question which team would win the Rocky View Sports Association (RVSA) football title this season, the Cochrane Cobras put the doubt to bed in the second half of its championship game Oct. 27, against the Springbank Phoenix.  Though Cochrane only led 14-2 after the first half, the team overcame the Phoenix with a solid offensive showing in the final 24 minutes. The Cobras scored three unanswered touchdowns in the third and fourth quarters to win 35-2.  The victory means Cochrane – which hasn’t lost a competitive game in more than three years – continues its dynasty by winning its fifth straight RVSA title.  Cobras co-head coach Rob McNabb said the 2018 divisional championship was just as sweet as the previous four.  “They’re all good, because you have a new group of kids every year,” he said. “I’m happy for the kids – they worked hard all season.” The Cobras’ first-half touchdowns came from the usual suspects – senior slot back Dylan Neis, who scored on a 40-yard scamper in the first frame, and quarterback Xavier Vaillancourt, who pushed the ball into the end zone on a third-and-goal in the final minute of the half. Both players have been instrumental for the Cobras’ offence this season.  Springbank’s sole points came on a safety in the second quarter, when Vaillancourt took a knee in his own end zone. But as evenly-fought as the first half was, the Cobras’ depth on offence started to show when McNabb fielded his younger players in the third quarter.  All three of Cochrane’s touchdowns in the second half came from Grade-10 tailback Chase Hunt, who showed his blistering pace and agility almost every time he received the ball.  “He’s going to be a special player,” McNabb said. Now that the RVSA title is in the bag, Cochrane will set its sights on defending its Tier 3 provincial championship. The provincial run will kick off Nov. 10 against the Cardston Cougars, culminating in the Alberta Bowl Nov. 24, in Fort McMurray.  Cochrane has won the Tier 3 provincial championship four years running, and is seeking an unprecedented fifth consecutive title.  For Springbank coach Shane Martell, the score against the Cobras did not reflect the level of competition between the two sides.  “It’s always tough coming in here, because Cochrane has an amazing team,” he said. “We know they bring it. I felt our guys brought it, too.”  Martell touted the performance of Springbank’s defensive line and secondary, which did a good job keeping the Cobras’ offence out of the Phoenix end zone on many of its drives – particularly in the first half.   “I know the scoreboard doesn’t reflect it, but our defence did an outstanding job containing,” Martell said. “They caught us off-guard a little bit with [Hunt] in the second half, but I thought our defence honestly played a great game today.” The defeat means Springbank finishes second in the RVSA three seasons running. However, the team’s season did not end with the match against Cochrane, as the Phoenix also qualified for the 2018 Tier 2 provincial playoffs.   The Green and White kicked off its provincial push Nov. 3 (after press time) against the Holy Trinity Academy Knights, of Okotoks. The Knights won the Big Rock Football Conference this season, upsetting the perennially-strong Foothills Falcons in the Big Rock championship game Oct. 25.  Martell said preparing for the Knights (currently ranked fifth for Tier 2 teams in Alberta) was the Phoenix’s sole focus for the week.  “We’ll let our guys re-group, do some film [review] and get ready for Holy Trinity,” he said.