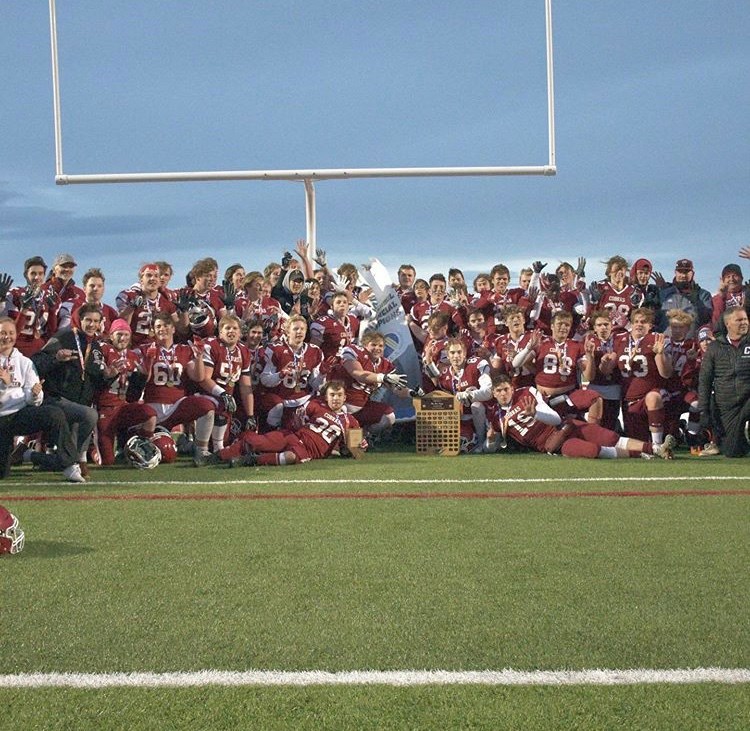 The Cochrane Cobras football team is the provincial Tier III champion for the sixth year in a row. Photo Submitted/For Great West Newspapers

The Cochrane Cobras football team is once again the Tier III provincial champion.

"It was exactly what we thought it was going to be," said co-head coach Rob McNab. "It was a tough, physical, athletic game that was going to go right to the end."

The Cobras needed a bit of time to get the wheels rolling before the defence came up big with Chandler Ball forcing a fumble on a strip sack of the Raiders' quarterback. The ball was picked up by William Hunter, who managed to return it to the end zone to put Cochrane on the scoreboard.

Holy Rosary seemingly found its footing for a few drives but was stung by the Cobras defence, including a Ben Dobson interception in his own end zone late in the second quarter to keep the Cochrane lead.

In the fourth quarter, the Cobras blocked a punt which resulted in quarterback Xavier Vaillancourt throwing his final high-school touchdown when he found Ethan Stanley in the end zone, pushing the lead to 13-0. Kicker Oscar Hughes put the finishing touches on the victory with a field goal with just under three minutes to play.

"You could tell [we] really wanted to win this game and the defence was killing it all game, so that really helped," McNab said. "We had the pressure off of us and we thought that if we could score another touchdown, the defence was going to keep us in it, and that's what happened."

With the victory, the Cobras recorded its fifth shutout in 11 games this year, having allowed no more than 10 points in any game.

"Our defence, traditionally, has been a great strength of ours, and they really take the pressure off the offence," McNab said. "We lost some key members last year, but with the scheme that [defensive co-ordinator] Ken Polson and the rest the coaches came up with was perfect. Our defence scored and gave us the ball in a really good field position for much of the game and made it easy on the offence."

The Cobras have a number of key seniors moving on to university football next year, including quarterback Xavier Vaillancourt and receivers Dawson Gladue and Derek Reid. There's even a question as to whether or not McNab has coached his last game with the Cobras.

"There's no question that retirement is looming," he said. "The season is over, so I'll have to sit down with my wife and family to discuss what the right decision is for us and the program – but if I was a betting man, I could see one more year."

About the Author: Troy Durrell

Troy is the Sports and Entertainment Reporter for the Cochrane Eagle.
Read more