A senior receiver with the Cochrane Cobras football team has taken the next step towards his dream of playing in the CFL – Dawson Laye signed a letter of intent April 11 to join the University of Regina Rams.
0
Apr 30, 2019 12:01 AM By: Scott Strasser 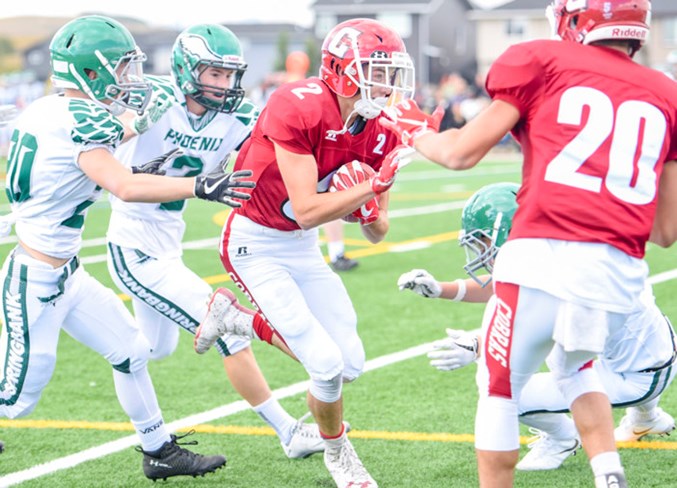 Cochrane Cobras Dawson Laye (No. 2) signed his letter of intent April 11 to continue his football career with the University of Regina Rams.

A senior receiver with the Cochrane Cobras football team has taken the next step towards his dream of playing in the CFL – Dawson Laye signed a letter of intent April 11 to join the University of Regina Rams.

“Now I don’t have to stress about football and getting signed, anymore,” said Laye, who attended the Rams’ spring camp in early April. “Their recruiting process was fun; they invited me to spring camp and they really liked me, [and ended up] offering me a scholarship.”

Cobras head coach Rob McNab said he is excited to see one of his star receivers make the jump to college football.

“He’s just a great athlete,” McNab said. “Offence, defence, special teams – he can do anything. He’s formed a good relationship with the sport of football.”

Remarkably, Laye did not lose a single competitive game while playing for the Cobras.

“His football knowledge is getting very advanced – especially in the passing game, which is nice,” McNab said. “He’s a great leader, he’s a good kid and he’s worked hard in both football and school, which has given him the chance to move onto the U SPORTS level.”

Laye is the most recent in a string of Cochrane High football players to join the Rams. He follows in the footsteps of Cobras alumni Kyle Moortgat and Adam Rask, who are currently on the U of R roster, as well as Bryce McKinnon, who recently graduated from the program.

“We feel very comfortable sending our kids there because they stay there,” McNab said. “They aren’t ‘one and dones.’ They enjoy it, they get summer jobs and they all have success at whatever level they want to be at.

“It’s a good fit for [Laye] and I’m pretty excited about that.”

The Rams football team is coming off a disappointing 2018 season in Canada West, finishing last in the conference with a 1-7 record.

Despite the U of R’s struggles last year, McNab said the Rams program is typically competitive in Canada West. The team finished third in 2017 and topped the regular-season standings in 2016 with a 6-2 record.

“They’re getting more competitive year-in and year-out, they’re putting guys into the Canadian Football League and I think a big reason is Mark McConkey,” he said. “He’s the offensive co-ordinator there. He’s from Calgary, he played his high-school football here before going to the U of R, but he’s very familiar with Calgary and surrounding football.

“He knows that there’s good football here as well as in Saskatchewan, so they want to try and get their share [of players] out of Alberta, as well.”

Because first-year players in U SPORTS football typically red-shirt, Laye said his goal is to make the Rams’ travelling squad in his second year and to start by his third year. Meanwhile, he intends to pursue a degree in business.

–With files from Troy Durrell