“The win felt good this year – we played well as a team and it was great to take back command over the Chargers,” said starting quarterback Xavier Vaillancourt.

“The [fifth] straight title is definitely something that means something to not only the program, but our players. Winning never gets old.”

The championship game was a fitting conclusion to the RVSA calendar – Cochrane and Bert Church were the league’s top two teams, with Cochrane boasting a 7-0 record and Bert Church, at 6-1, following closely behind.

The regular-season match-up between the two teams, which determined the top seed for the RVSA playoffs, ended 21-3 for the Cobras.

On a cold and windy afternoon in Cochrane, the Cobras started the championship tilt on the front foot, with Vaillancourt and Grade-11 running back Chase Hunt recording rushing touchdowns in the game’s first six minutes. By the end of the first quarter – which was played almost exclusively in the Chargers’ half – the score was 16-0 for Cochrane. 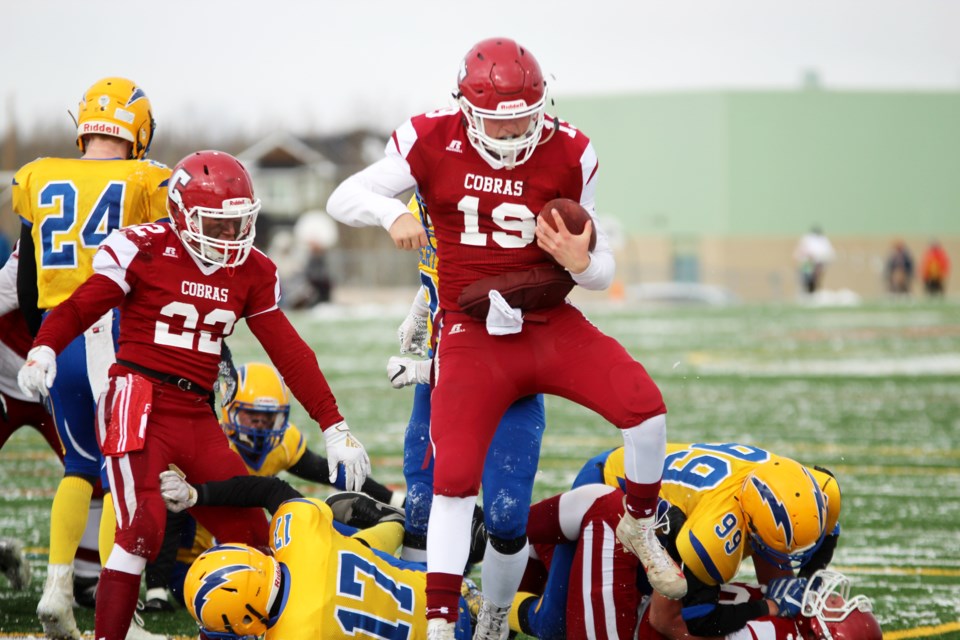 Quarterback Xavier Vaillancourt hurdles over some players to get the ball into the Chargers' end zone. The senior pivot scored two rushing TDs against Bert Church.
“The conditions were very difficult – the wind was very strong,” said Vaillancourt, who is committed to the University of Calgary Dinos next year. “We had it at our backs for the first quarter, so we needed to get on the board. I think it was very demoralizing for the other team when we got out to a 14-0 lead right in the first quarter.”

The home team continued to dominate in the second frame – Vaillancourt ran for his second TD of the game to extend the lead to 23-0.

“We relied on all aspects of the game – run game, pass game and special teams, too” Vaillancourt said. “The defence, of course, did a stellar job again.”

Bert Church’s fans finally had reason to celebrate late in the first half. Receiver Lucas Alway caught a long throw from pivot Tristan Remus-Arevalo and made it into the Cobras’ red zone before being brought down. A few plays later, Tyler Ruck muscled the ball over the line on a first-and-goal to put the Chargers on the board.

The one-point convert was good, and Cochrane took the 23-7 lead into the half-time break.

The second half was much more evenly-fought – both teams cancelled each other out and forced turnovers on downs. Neither side managed to add to its point total in the third quarter.

An increased number of penalties called on both teams was also a factor. At one point, a 90-yard punt return from the Cobras was called back. 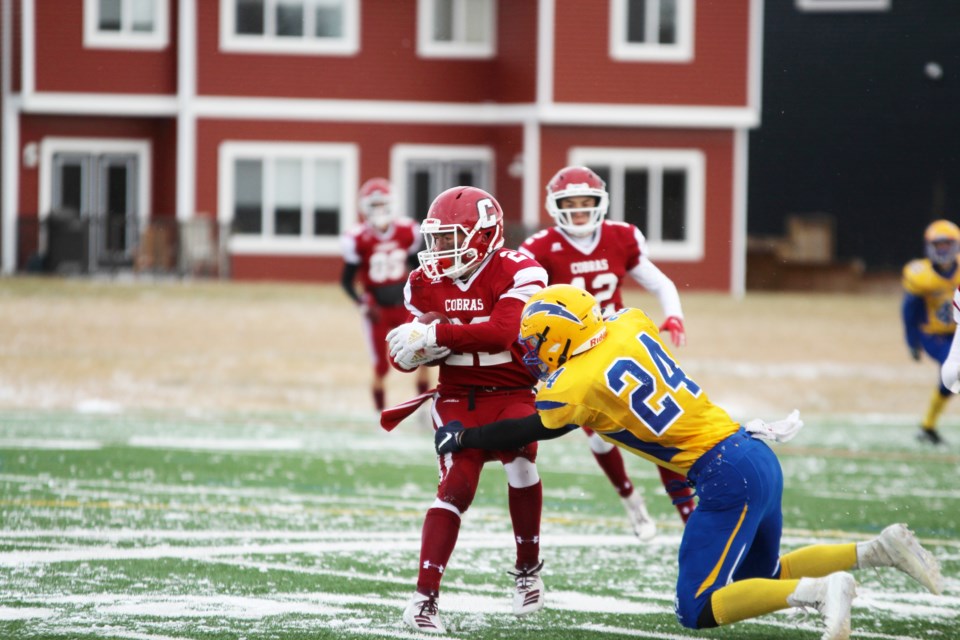 Grade-11 running back Chase Hunt (No. 22) scored two touchdowns for the Cobras to propel the team to victory.

“Penalties are always a part of the game and they are going to happen,” Vaillancourt said. “We can’t blame penalties for anything. Down the stretch, we are going to try and clean it up, but we have to just keep playing.”

The Cobras’ defence tacked on two more points in the fourth quarter by forcing the Chargers to take a safety. Then, with just a few minutes left to play, Hunt scored his second touchdown of the game with a 10-yard jaunt into the end zone, which brought the score to 31-7.

With the RVSA season concluded, Cochrane will now shift its focus towards the 2019 Alberta Bowl. The team is chasing its sixth consecutive Tier 3 provincial title.

“We are in preparation mode for our provincial run,” Vaillancourt said. “I think the team is excited and [we are] going to amp up the intensity for practice and all the games to come.”