Pickleball players now have a new, local spot to swing their rackets. City of Airdrie staff and members of the Airdrie and Area Pickleball Club (AAPC) unveiled a brand-new $80,000 outdoor pickleball facility Aug. 22.
Aug 30, 2018 12:01 AM By: Scott Strasser 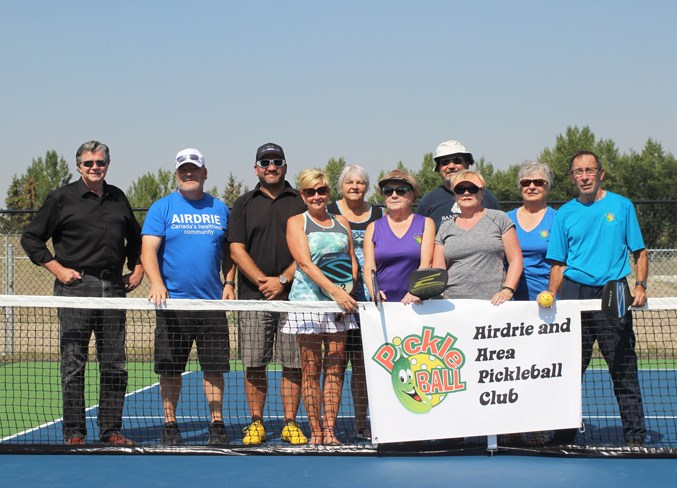 After four months of construction, new pickleball courts were unveiled Aug. 22 by City of Airdrie staff and members of the Airdrie and Area Pickleball Club.

Pickleball players now have a new, local spot to swing their rackets. City of Airdrie staff and members of the Airdrie and Area Pickleball Club (AAPC) unveiled a brand-new $80,000 outdoor pickleball facility Aug. 22. The four courts are located off Main Street, at the site of the old Street Art Gallery near Nose Creek Park. The new amenity was under construction for four months and should have a lifecycle of more than 15 years, according to Archie Lang, the City of Airdrie’s manager of parks and public works. The sport of pickleball originated in the southern United States about 60 years ago, but according to AAPC’s current president, Barry Hoffman, has grown in popularity in Canada more recently. “The snowbirds dragged it up to Canada and it’s just taken off like wildfire,” he said. Pickleball combines elements of tennis on a badminton court-sized space. The rackets are slightly larger than a table tennis paddle and the ball is light and made of plastic. “It’s a non-contact sport and anyone can play it, especially seniors,” Hoffman said. “That’s one of the big things. It’s just a fun sport.” The sport has also grown in popularity in Airdrie. The AAPC formed two years ago and has approximately 50 to 60 members, according to Hoffman. Up until now, he said, the club has played at the tennis courts at East Lake Park and on makeshift courts indoors at Genesis Place. “We started two years ago in Genesis during the winter,” Hoffman said. “The membership grew and grew, and that’s basically how it took off. “We encourage new people to come – we train them, educate them and they participate and see how they progress from there.” Among those who tested the new courts Aug. 22 was Airdrie mayor Peter Brown, who rallied with AAPC members alongside Hoffman for about 10 minutes. “This craze of pickleball is really big in the southern U.S. and it’s big with seniors, but I think when the kids start to play it, they’re going to realize how much fun a game it is,” he said. “It’s a very light ball [and] there’s a little less movement than on a tennis court, so you’re not having to move around as much. There’s less stress on your bones.”