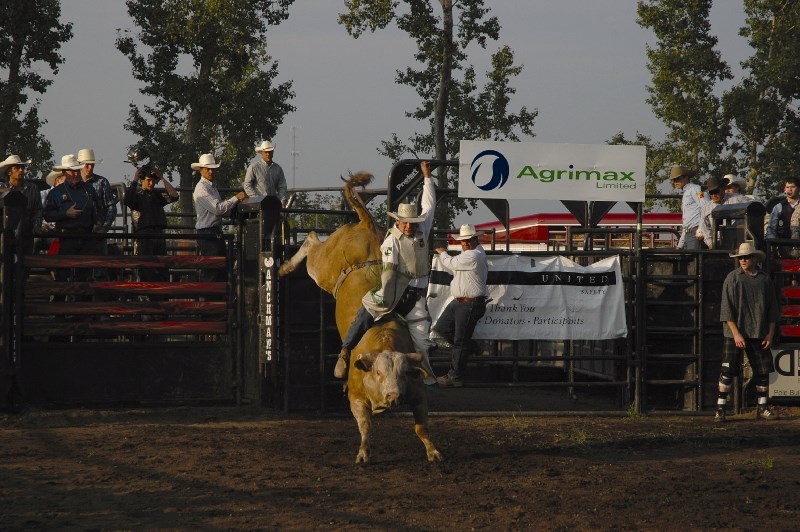 “It was kind of a lucky deal,” said Brooks on drawing his winning bull, Bombproof.

More than half of the riders from the group of 30 were bucked off, including veteran rider and current bull riding money leader Jesse Torkelson.

Black Diamond’s Tyler Thomson was the other rider to hang on for eight seconds in the final, winning $3,277.

“The way it was going, it was touch-and-go,” said Thomson, who won the event last year.

Ty Patten won the first Go-Round with an 87, the highest single score from the rodeo, and was awarded $1,524 with a third place finish in the aggregate.

Nathan Roy qualified for the final six and was awarded a re-ride in the last heat after his bull hit the gate in the opening seconds of his next outing.

His second attempt proved fruitless as he was bucked off within seconds but still managed to finish fourth overall, winning $1,350.36.

“The (bulls) we’re pretty good and the weather didn’t help,” said Roy of the bulls and riding conditions.

Rain and lightning halted the event for 20 minutes in between qualifying and finals, leaving the ground wet and the bulls bucking for the finale.

Judge Jim Dunn said the riders had it tough against such high calibre bulls.

“The finals’ bulls were top notch,” he said.